1. The strong secular position of Singapore's PM Lee in contrast to Indonesia and Malaysia

This is the first of 18 short impressions of the research trip of Karel and Pauline Steenbrink to East Indonesia, 17 August-17 September 2009. The trip was undertaken in preparation of the third and last volume of the book "Catholics in Indonesia, 1800-2000"

From 17th August until 17th September, Pauline and I made a trip to East Indonesia, starting in Bali, but concentrating on Manado, Ambon and Papua (Abepura, Sentani, Jayapura). The main purpose of the trip was to get a feeling of the region in preparation of the third volume of Catholics in Independent Indonesia.
We started with a short visit to Singapore where we saw the old colonial section of the town, especially the Museum of Asian Civilisations. Then we went for lunch and a long talk to the Catholic Church of the Blessed Sacrament (Commonwealth Drive) where I saw the parish priest Father Anthony Hutjes, in the 1960s a fellow student of theology in the Netherlands.
The Church of the Blessed Sacrament is located next to a Hindu temple. There are no problems between the two places of worship: both like to use bells, although in different style. The architecture of the two are very different, but this causes no problem in the rich variety of Singapore. 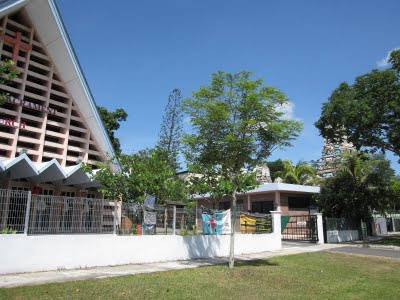 The Church is modelled after a tent, referring to the Old Testament Tabernacle as the dwelling of the deity. To the right part of the much smaller Hindu shrine is still visible.

The day before our visit Prime Minister Lee Hsien Loong had delivered a very strong speech about interreligious harmony and the risks of religious fervour at the occasion of National Day (9 August, celebrating 50 years of independence).
Religious and ethnic differences cannot be extripated, but the need a wise and strict management. Lee was very clear about four basic rules: 1. all groups must exercise tolerance and restraint; (Christians who proselytised and spread hate towards Catholics entered jail) 2. religion must be separated from politics; (do not mobilize religion for politics) 3. the government must be secular; 4. there must be a common place, for meeting, eating together. 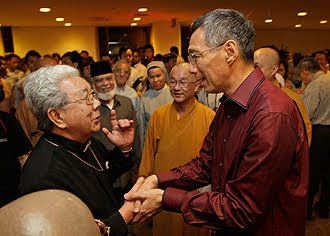 In 1984 Singapore has allowed the introduction of religious knowledge classes, but the programmes were deleted in 1989 'because students studied only one of the religions and some teachers used the classes to promote their faiths and this teaching was widening divisions instead of bringing people together.'
Is this what Mangunwijaya meant when he said that there was 'too much religion in Indonesia' and that this overdosis of religion was damaging the country? We will return frequently on this theme in our reports from Indonesia.
Gepost door Karel Steenbrink op 07:51