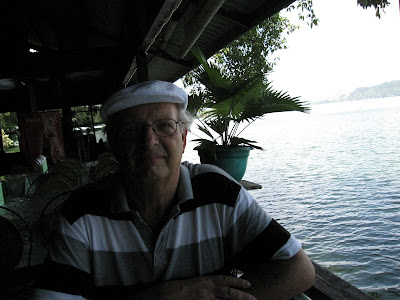 Here is your reporter, sitting in a quite luxurious restaurant with a splendid view on lake Sentani, some 30 km south of the coast of Northeast West-Papua. Lake Sentani is some 20 km long and it dominates a valley (with the airport) in the mountainous northern region of Papua. The only real local element here was a neatly served porridge of sagu. We did not try it ourselves, because it looks more or less like the glue we use to work with wall paper. Together with good spices it seems to be delicious. We kept it to the view itself. 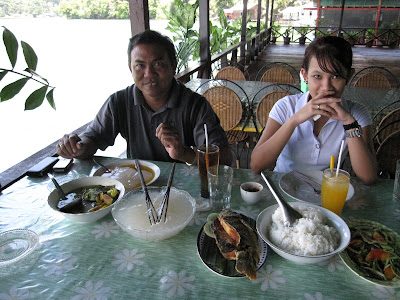 What did we see and experience in Papua? First of all it is the majestic nature, the immense distances, underpopulated land, much space, but with a difficult nature. In fact we only saw about 100 km: from Teluk Merah, a beautiful bay with a village of fishermen, the remnants of the oil harbour of the Dutch period and now the major harbour for NorthEast Papua under construction (hills destroyed because of the need to contruct a road steep uphill from the bay), then Sentani, the new town along the lake, further eastwards Abepura with the Cenderawasih University and the theological colleges of Catholics and Protestants, finally Jayapura, the seat of the government and until now the harbour.

When driving to Tanah Merah Bay, at one moment the road was b locked. We (Franciscan Friar Jan Serps as guide and driver, the Steenbrink, Simon Brussel of Justitia et Pax, The Hague, had already survived a number of quite suspicious bridges, but this one was really closed. 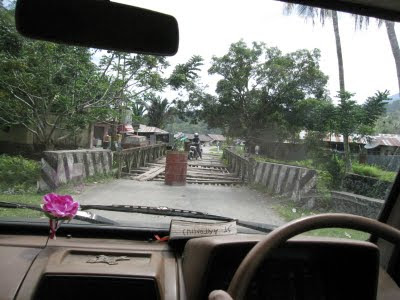 But in the end we could reach the romantic village. The students of the theological college sometimes come here for a picnic and experience of nature. 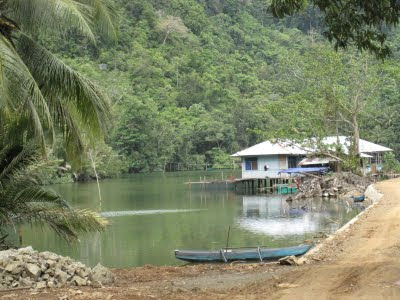 But this trip was only possible thanks to a strong 4 wheel Toyota (from 1991!) along quite dirt roads. What is needed fro the construction of a better road, that is ready for transport of big containers, is also the destruction of much nature, as seen below. 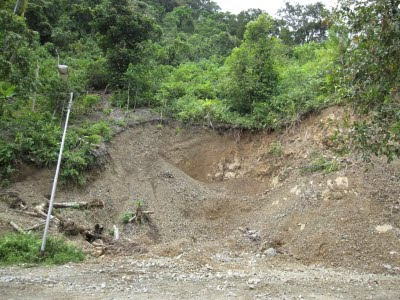 Most of the plans for the development are not initiated and formulated by original Papua people, but by outsiders, migrants, people from other regions of Indonesia. In Ambon it were quite often these pendatang who were accused of being the cause for the civil war and the inter-religious conflicts. In Papua it are the migrants or pendatang (now already counting for 48% of the total population of this huge area, 14 times the size of the Netherland with only a population of some 2.5 million.
There are many faction of 'native' Papuans, still proud that their parents wore the Koteka or calabash covering the penis of the mountain people of the region. 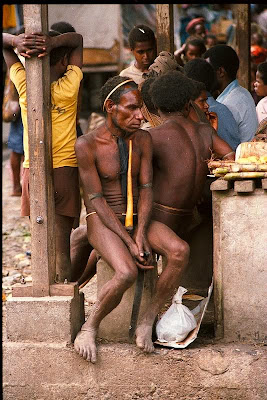 Against the strategy of not well organised and not generally supported movements for independence, the major church leaders promote a dialogue with the government in Jakarta under the label Papua, Land of Peace. We talked with an important representative of the largest Protestant Church in North Papua, Prof. Sosthenes Sumihe at the Kijne Theological School. We heard many report about the radical evangelical leader Benny Giay, visited his family and received all his new publications, but onfurtuntale could not see him, because of a trip to Lake Paniai. In another contribution we will go into some details about our conversation the the major Catholic spokesman in social and political affairs, Dr. Neles Tebay.
Gepost door Karel Steenbrink op 23:14