'According to their religion'

Cartoons on Islamic subjects are hot issues these days. They show that anyway Islam is a much debated subject, so different from the late 1960s when I started my study of Islam. A funny cartoon was in De Volkskrant this week. 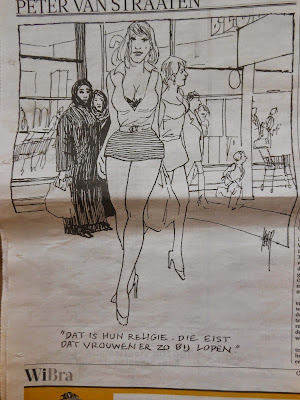 Two veiled women, dressed along the proper Muslim dress code look at some young Western women, with their outfit as usual for spring and summer and one says: "This is their religion. It demands that women dress in this way."
Gepost door Karel Steenbrink op 20:41 Geen opmerkingen:

On 8 May 2015 there was a festive meeting in the centre of The Hague, in the building of the Royal Library at the occasion of the presnetation of the six volumes of Bronnen betreffende de geschiedenis van Kerk en School in de gouvernementen Ambon, Ternate en Banda ten tijde van de Verenigde Oost-Indische Compagnie (VOC), 1605-1791. They are available, for free, on the internet HuygensKNAW.nl, but it is also possible to buy printed copies of this series.
This long title is the complete name for the completion of a progamme that started in the mid-1990s. After Tom van den End had published with Chris de Jong en Mariette van Selm nine volumes on the period after 1800, Henk Niemeijer was commissioned to work on publication of the VOC religious archives. For the church council of Batavia this work had been completed already during the colonial period. Now the archives of the correspondance between Ambon, Ternate, Banda with the central church council in Batavia have been published. It was a happening with interesting talks. Gerrit Knaap opened the session as the representative of Huygens Institute for Dutch History. 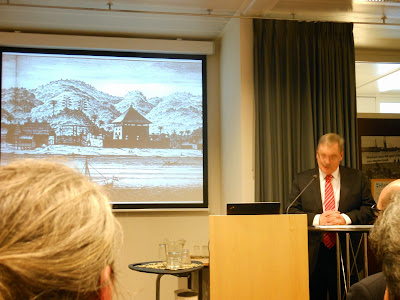 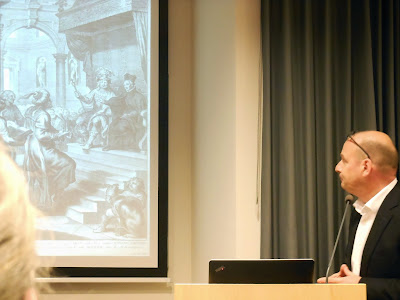 Prof. Jos Gommans of Leiden University (non-Western, mostly colonial history, but not a specialist for Indonesia) started with an interesting talk on regions outside Indonesia. On one of the pictures he showed, we see here an image from the court of the Mugals: A Jesuit with his black cap is sitting besides Aurangzeb (with a turban) as a sign of the religious talks at the court in the Mugal Empire. (From Cornelius Hazart, Kerckelycke Historie, a very strong anti-Calvninist and anti-Muslim work by a Jesuit, around 1670). 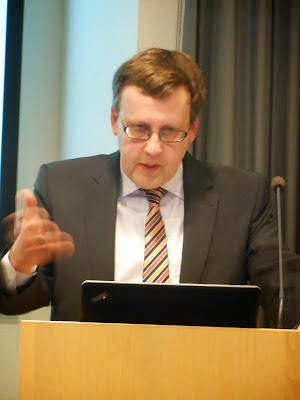 Fred van Lieburg of the Free University of Amsterdam gave a talk on the place of Missionary History in modern research and gave a plea for including this history under the general label of Church or religious history. 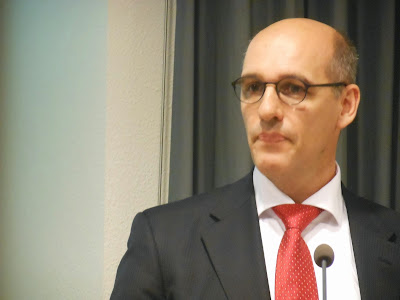 The first truly to talk about VOC archives was Henk Nieumeijer, who was the executive researcher for the project, somehwre between 1995-200. Since he has worked with the TANAP programme and is now in Jakarta for Cort Stichting, to rescue archives in Jakarta. He found, selected archives, made the first transcription. 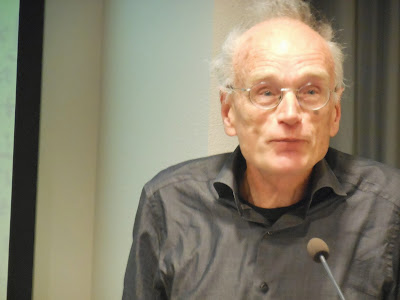 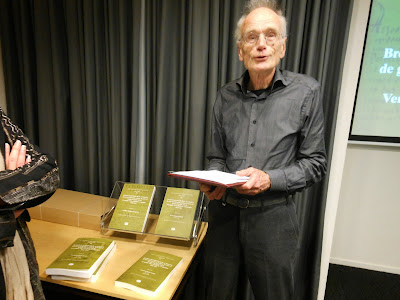 The final work on the publication of these sources was done by Tom van den End, between 2009 and 2015. He had a very interesting and personal talk about these many pages (some 3500 in print!). 1) He illustrated the modernity of the merchant: there was an efficient apparatus for disaster help, needed in cases of earth quakes, floods, starvation. It provided education (albeit mostly religious only) also for girls. 2) there was a high number of ministers who died at young age. 10% of the 253 ministers who were nominated for the Indies did not arrive in Batavia, but died during the journey. Many also did not survive the first months. 3) Many ministers wrote translations, sermons, hymns in Malay (although it was mostly translations). Van den End 'converted' in his opinion about Valentyn. Had was for 2/3 right in his plea to use the colloquial Malay of East Indonesia, especially Ambon and not the formal 'High Malay' of the royal/sultanate courts of more Western regions. 4) He resented the lack of personal document and more narrative texts. It is always very impersonal. 5) He was very angry about the constant negative reports about local Christians. It is one long complaint of these ministers (jammerklacht): they are stupid, do not know their religion, do not want to learn. Tom asked whether after about 200 years and the work of so many local teachers there was nothing more than that. He judged that the 19th century missionaries were absolutely different from the 17th and 18th century government officials/church ministers.

The Unfinished Journey of Hans Jansen

Hans (J.J.G.) Jansen, born in 1942 died on 5 May 2015, 'Liberation Day' in our country, the Netherlands. It was commemoration of 70 years freedom from German occupation.
Hans Jansen was born in a solid Reformed, Calvinist family. He studied Semitic languages and became a gifted teacher of Arabic. He wrote a quite thin (110 pages) doctoral dissertation on The Interpretation of the Koran in Modern Egypt and became a lecturer in Arabic at Leiden University. In his dissertation he gives description of biography and character of people from Muhammad Abduh to Amin al-Khuli, Kamil Husayn, Mahmud Shaltut and quite a few others. Together with Baljon (on Qur'an interpretation in Modern India) he suggested me initially to write a dissertation on modern Qur'an interpretation in Indonesia. Instead I turned to field research on pesantren education.
In the early 1980s he was Director of the Dutch Institute in Cairo. He told me in the later 1980s, when we both lived in Leiden, that he had turned atheist during the 1960 and 1970s, but that was quite inconvenient in Egypt where atheist are seen as Communists and unethical persons. Soot  decided to embrace Christianity again, but not in the style of a Dutch village and a local tradition, but the global tradition of Roman Catholicism. We had a debate about orthodoxy and the way to be member of a great tradition.Jansen wanted a total dedication, with my family we were active in the ecumenical and liberal academic parish. 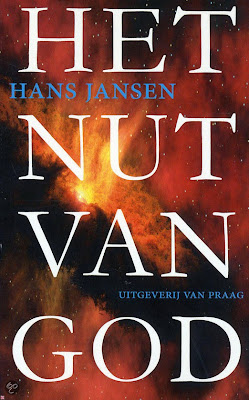 Jansen was best as a teacher and translator of Arabic. He published an English translation of the ideological defence of the terrorists who had killed Egyptian President Anwar Sadat. He reproached fellow Rabists and scholars of Islam that they presented a too rosy image of Islam. He wanted to warn the world for the danger of Islam. Many of his fellow academics were in his words tièremondist, who always wanted to forgive people from the 'Third World', ask for understanding, blame Western countries for the mistakes and blunders in their former colonies.
He wrote a quite superficial book on the 'Profit to believe in God', in Dutch Het nut van God: social cohesion, friendliness, certainty in life. His best book is the two-volume critical study on the biography of the Prophet Muhammad.
During the last decade Jansen was more and more close to the Dutch politician Geert Wilders who has considers Islam as the greatest danger for the existence of the world. Jansen was member of the team that defended Wilders in court; he delivered texts for that terrible movie Fitna and published a strange apocalyptic book, Eindstrijd. 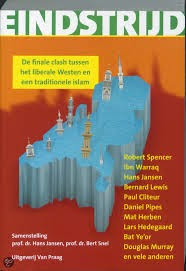 Eindstrijd means 'The Final Battle', here between the Liberal West and Traditional Islam. On the front page of the book we see a drawing, based on an art work made by Slowak artist Kristof Kitera for the office of the European Commission in Brussels. It is the map of the Netherlands, but the country is flooded, because it is the Low Country and only some minarets have survived.
There is sime tragic feeling at the untimely death of Hans Jansen. He was since 2014 one of the some 750 members of the European Parliament. Twice he was allowed to give a talk of one (!) minute in a nearly absurdist style. He never developed a balanced and more detailed study about Islam in general or of groups of it.
Gepost door Karel Steenbrink op 23:23 Geen opmerkingen: