The Islamic State, a painful illusion! A hard attack against Middle East infiltration in Indonesia by Abdurrahman Wahid c.s.

World-wide the Arab countries and especially Saudi Arabia have sold oil. More and more since the 1970s and 1980s. But not only oil has spread over the whole world: Wahhabi doctrines have followed and their infiltration in Indonesian society and culture has been smooth, sometimes unclear, but since 2002 (Bali bombings) it has become more and more apparent that their grip on Indonesian Muslim society has become quite strong. Prominent Muslims leaders of Nahdlatul Ulama (Abdurrahman Wahid and Mustofa Bisri) and Muhammadiyah (Ahmad Suafii Maarif) have decided that 'it time now to fight back' (kini saatnya kita menyarang balik mereka, p. 195). This is done in an extremely well written and very informative book, Ilusi Negara Islam. Ekspansi Gerakan Islam Transnasional di Indonesia. I found the book, published in April 2009, on the internet (after a mail from Capuchin Friar Huub Boelaars, see http://www.bhinnekatunggalika.org/).
The two figures on the cover are Soekarno and Mohammed Hatta, at the declaration of Independence of Indonesia, 17 August 1945. The Indonesian State as they wanted it, is based on Pancasila doctrines, acknowledging the one and supreme Deity, but including other religions besides Islam, democracy, social justice. The idea of khilafa instead of a theocratic and autoritarian state that fights all people who do not agree with their radical 'Muslim' views and blames them as unbelievers.

The 'transnational' Muslim movements are the Wahhabi, the Muslim Brothers and Hizbu Tahrir. The origin and early developments of the three movements are sketched and emphasis is given to their transformations in modern Saudi Arabia. They are connected with the purety seeking ideas of Khawarij Muslims of early Islam and in this way they are easily blamed as heretic and as a deviation of mainstream and sound Islam.
In the period of New Order (1965-1998) they infiltrated through DDII (Muhammad Natsir's Council for Da'wa) and LIPIA (the Institute for Arab Training in Jakarta). They infiltrated in Muhammadiyah, where they could block candidates for important positions, in Islamic and State Universities, in NU mosques. Their clearest expression is the political party PKS (Partai Keadilan Sejahtera).
In December 2006 Muhammadiyah has taken a firm stand against PKS and other Wahhabi/Salafi movements by a declaration that is signed by General Chairman Din Syamsuddin. Since 2006 also the Nahdlatul Ulama have started a strong policy against 'the extremist transnational ideology and its movements.'
The strongly debates Fatwas of the MUI, Majelis Ulama Indonesia of mid-2005, where interreligious dialogue, interreligious prayers sessions, the acceptance of pluralism were defended, must be seen as a strong sign of Wahhabi infiltration in the MUI. The ban on Ahmadiyah by MUI and minister of religion must also be seen in this respect. Instead, so the book on p. 199, MUI shouold have banned Hizbut Tahrir Indonesia as non-Islamic because it does no accept Pancasila and democracy.
The MUI was erected by the Soeharto government in 1975 to control Islam. Instead MUI now is able to control government policy in religious affairs (201).
From the viewpoint of harmony in society, this clear book can only be applauded.
But the book also does not answer quite important questions: Why could this combination of Wahabi/Ihkwan become so interesting for Indonesians? Is it in all maters so bad as depicted here? Why were Muhammadiyah and NU not able to formulate a more attractive and feasible spirituality for modern Indonesians, especially for abangan people who were no longer happy with their tradition or could not be proud about it? Zainuddin MZ, AA Gym and other a-political could not prevent this turn towards a more political Islam: why? This book has been accused of a style of writing close to intelligence reports, including terminologies of infiltration, domination. It is a ploticial cry in itself but what is the positive side of this book: only a return to the wayang of the Wali Songo and to the Pancasila doctrine? That seems to be not enough.
Gepost door Karel Steenbrink op 02:50 1 opmerking:

Alyasa Abubakar and the partial introduction of Sharia in Aceh

27-30 May I was again in Montreal at McGill University (where I was a visiting professor in 1992-3). The main goal was the conference on global Buddhist-Muslim relations as I have described in another blog.
In the margin of this conference I met twice my old friend Alyasa Abubakar who stayed in my house in Yogyakarta 1987-8 when my wife and the two boys had already returned to the Netherlands. We played table tennis daily, enjoyed the food prepared by Ndari, our cook and even climbed mount Merapi together. Alyasa was at that time still writing his doctoral dissertation on the principles of Islamic Law. We had some debates but also had decided to disagree on several subjects. In my opinion individual persons can choose themselves how to clean things, how to eat healthy food and how to behave properly and decent. There are in my view too many rules in Islamic law, that are not truly based in the message of Muhammad as found in the Qur'an and the hadith is an uncertain source and its basis is not so clearly found in the Holy Books itself. That is my opinion, although I may just abstain from an opinion, because officially or formally I am no Muslim. So, why should I have an opinion about this theme at all?
Alyasa became the head of the office that should introduce sharia rules secara kaffahwhich is 'in its full content'. 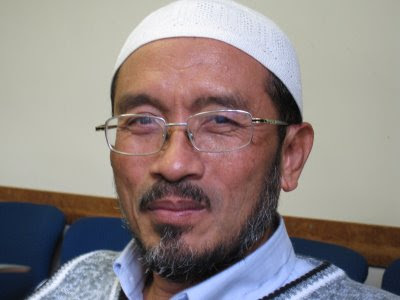 As far as I understood from Alyasa (who has now left this office and has returned to his academic work at the IAIN, the State Academy of Islamic Studies, Ar Raniri in Darussalam Banda Aceh), the introduction of sharia in Aceh is still not applied in its full content and will also never be used in all its aspects. Only rules against alcoholic drinking, gambling, prostitution, against living together without marriage are effectuated until now. Nothing in the field of economy, not against corruption. Rules about halal food and against mixed marriages were already introduced earlier. 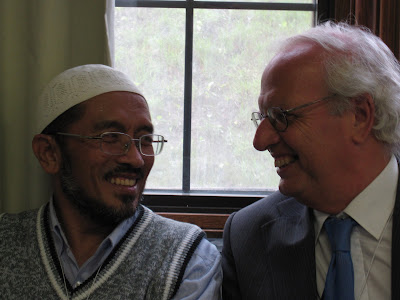 For the journal KULTUR (published by PBB, Pusat Bahasa dan Budaya of the Jakarta UIN) I wrote an article on Colonial and Postcolonial Dutch Perception of Sharia. There is an immense difference between the two periods. In the colonial time, multiple legal systems were accepted (besides Western Law not only Islamic Law for Marriage, Divorce and Inheritance, but also Adat Law). In recent times sharia has a very bad image in the Netherlands. I found 243 parliamentary documents since 1983 (no reference to sharia before that time') and they were all negative.
Readers interested in the subject can send me an email and ask for the full text.
Gepost door Karel Steenbrink op 03:10 Geen opmerkingen: 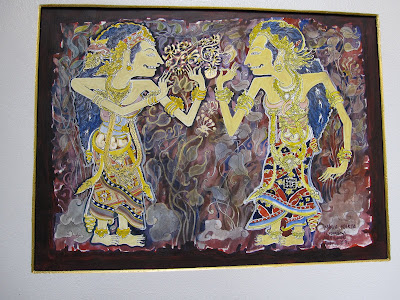 In early June 2009 Nyoman Darsane was at some celebration and a conference of the Theological School (PThU, Protestantse Theologische Universiteit) in Kampen. There were some twenty of his paintings in a modest exhibition. At the invitation of Volker Kuester, Anton Wessels, my wife Paule and I walked with him in the rooms of the exhibition.
I know the work of Darsane since long. One of his paintings is on the front page of the 'thick book', the History of Christianity in Indonesia (Leiden, Brill, 2008, 1004 pages), which I edited together with Jan Aritonang of Jakarta. Volker Kuester wrote on him in that book, 940-947 in comparison with the more daring and modern Bagong Kussudiardja. Finally we liked Darsane for the front of that book. But this was the first time I met him in person.
Darsane is slender, but very tall for a Balinese, about 1.85m the same length as I am. He was educated a teacher of art, but after some success in Batik painting he could make his living from his art. He has the same problem as the Indian Lutheran artist Solomon Raj: his painting are not used in his church. He sells mostly to foreign tourists or to Indonesian Christians for use at home. Darsane also makes leather wayang puppets and he uses the puppets for performances in churches.
Among the twenty-odd paintings in Kampen there were three paintings of Martha and Mary the two sisters of Lazarus, Jesus' friend in the village of Nethany, close to Jerusalem. The sisters are quite different. Mary is the talking and reading one, listening to Jesus sitting at his feet. Martha is always busy in the household. She complains to Jesus about her 'lazy' sister (Luke 10:38-42). Jesus takes the side of Mary: 'Mary has chosen what is better, and it will not be taken away from her.' In Catholic and Orthodox tradition Mary is identified with contemplation of monks and nuns in monasteries, while Martha is like those active in practical work like education, health care and pastoral work. 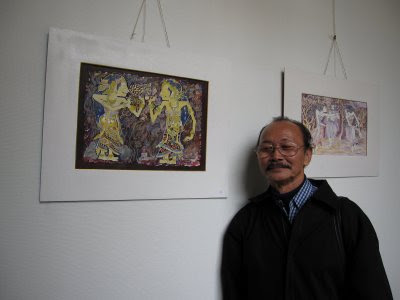 Darsane elaborated the story in his wayang play much longer than the few lines in the gospel of Luke (and some more about Lazarus risen from death, John 11:1-44) and he continued this in his paintings. In some of these Martha and Mary are quarrelling. In one the two are like twin sisters and cannot be differentiated. This is because at this stage they have reached harmony and agree about what must be done in practical things and for the more substantial truth.
Gepost door Karel Steenbrink op 02:40 1 opmerking: 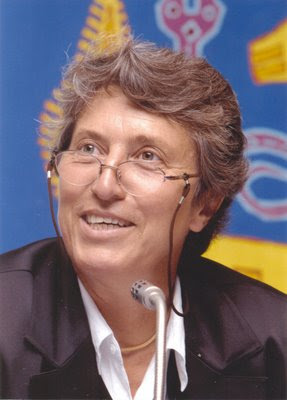 The Dutch scholar Saskia Wierenga has not only published in 2002 her doctoral dissertation (originally defended in 1995) on Sexual Politics in Indonesia, she also has written a novel about a researcher/journalist in Indonesia (mostly Jakarta and Surakarta, about 1980) who does inquiries about the real events of 30 September 1965 and its aftermath. She discovers that the generals and the young Captain Tendean were not victims of sexual plays, no penises cut off, as was the story that was spread about 3-5 days after the terrible murders. The stories about the young 'communist' women performing dirty dancing in front of the prisoners at Lubang Buaya and playing with the penises, was invented by 'a pastor and a dancing priest'. The pastor is identified as Father Bron who shows much resemblance to Father Joop Beek, while Subchan is mentioned as his partner in inventing the story, but also as someone 'who was often seen in nightclubs, where he danced with women and loved to drink a good glass' (136).
'Father Bron/Beek and Subchan played the role of God himself. They were convinced that the Supreme Being had made a mistake by allowing the communists in their playground. But one cannot send the devil to finish God's job. No!' (169)
Subchan and more even Bron/Beek were the advisors to the demonstrations of the students and they invented the slogan: 'Crush the Communist Party and hang the whores of the women movement!' (199)
Passages about Bron/Beek and Subchan are found on pages 136-7; 169-174 and 197-205. The cover of the book has the section on the Monumen Kesaktian Pancasila in Jakarta with the reference to the dirty role of these women. 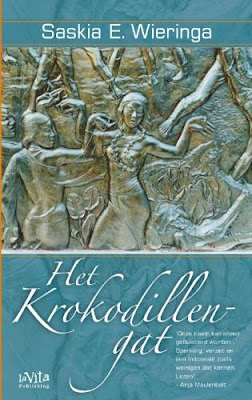 As a novel the book has quite nice descriptions in an 'orientalist' style: how does a Dutch researcher make contacts in Indonesia, his or her network, what is mostly interesting. In Wierenga's book of 2002 Father Beek is mentioned by his own name on p. 302 as 'involved in the virulently anti-communist group Catholic Action'. In the note on p. 332 the magazine Indonesia (Cornell? Leiden?) is quoted for Beek's role in orchestrating the massacre of the communists and in forming the New Order state. Still no concrete facts, although strong statements from people who could really know.
Gepost door Karel Steenbrink op 21:59 Geen opmerkingen: