2. The myth of the Islamic State versus the illusion of the whole world for Christ

During the visit to Indonesia of August-September 2009, I gave five lectures: to the Catholic seminary of Pineleng and the Protestant University of Tomohon (both Minahasa). In Ambon I gave a talk to the interfaith group headed by Abdurrahman Wakano (Interfidei) and another at the secular mixed Pattimura State University. In Papua I gave a talk to the Franciscan Seminarians of Sentani/Abepura. I had prepared a powerpoint presentation about the religious and social changes in the Netherlands since 1960, from a homogeneous Christian society towards pluralism. 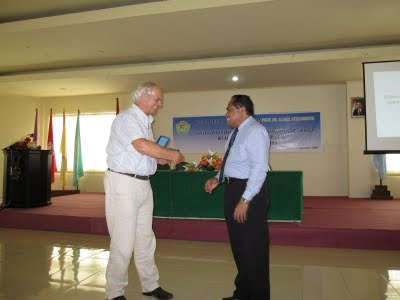 The usual end of a formal lecture: the rector of Pattimura University gives a present to Prof. Steenbrink

In the lecture and more even in the debates the discussion was often about the cause of pluralism: pendatang or migrants are a hot topic. In Ambon and Papua they are now mostly seen as the cause of all problems. In minahasa they feel that they only had a narrow escape from the same problem as the other regions.
Christians are very much afraid for the introduction of sharia law or an Islamic State. But what is the fear with the Muslims? In fact, there is now mutual fear between Muslims and Christians, according to the title of the dissertation by Mujiburrahman (Utrecht 2006): Feeling threatened. Muslim-Christian Relations in Indonesia's New Order. Muslims fear the aggressive preaching and proselytising by Christians and their (impossible but threatening) dream of the whole world for Christ, the whole world accepting Jesus Christ as its saviour. We had quite long debates about this theme, that is usually not seen as aggressive or threatening by Christians. Virtually all agreed that it is not realistic. In fact the words of Qur'an 5:48 are also seen by Christians as more realistic: 'If God so had willed, He could surely have made you all in one single community. But He willed it otherwise, in order to test you by means of what He has vouchsafed unto you. Vie then with one another in doing good works! Unto God you all return.

Mujiburrahman, author of Feeling Threatened. Lecture at the IAIN of Banjarmasin
But for this moment both the myth of the Islamic State and the Impossible Dream of a Whole World for Christ, still are firmly rooted in the minds and common discourse of Christians and Muslims. 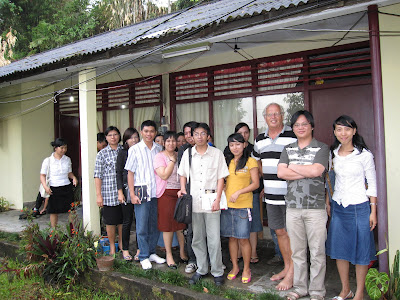 At UKIT, the Protestant University of Tomohon, some 25 students asked for an extra discussion in the afternoon. These were the graduate students. They had some plan in this second meeting: they requested the possibility of some credits after twice listening to my stories and theories. They have to write an essay of 2500 words about 'The danger of outrageous dreams of religious expansion' and send it to karel@steenbrink.nu.
Gepost door Karel Steenbrink op 08:24