The conversion of Sergeant Nicholas Brody

At home Paule and I are watching the TV series Homeland. It is quite an undertaking: we have the 4 series, 12 hour each. In total it is 48 hours or  even more. Watching two shows on one evening it still will take us about a month to see the whole series. It is wonderful to see how many people have commented on the series on the Internet. It seems to be the favorite series of President Barack Obama.
From the first show it was striking to me how sergeant Brody (convert to Islam during his 8 years of prison in Irak; the Stockholm syndrome) performed his prayers in his garage during the night. Taking ablutions first, then a simple prayer rug, the Fatiha spoken in a quite hesitant way of a mu'allaf, a recent convert (one would expect him saying it in the usual fast way Muslims do after years of experience. I can recite al-Fatiha in one breath only: Catholics pray the rosary in the same fast way as Muslims recite their prayers). The prayer of Brody is a solemn, quiet and somewhat mysterious element in the series. 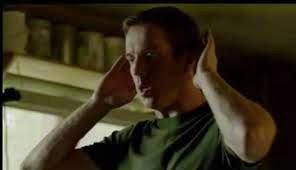 In Caracas Brody is taken as a prisoner/important asset to receive a fortune, in Tower of David, we hear the sound of the azan, the call to prayer (quite illogical: so loud and dominating this big city, but there is so much irrational in the series) he flees to to the imam of the mosque and says a few short sentences, hesitant in fusha the formal Arabic speech not the colloquial he could hear from the people who guarded him in the eight years in prison. 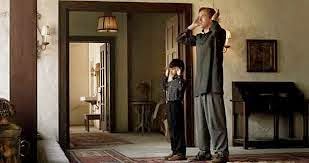 Brody here praying with Issa, the little boy who later was killed by a drone and the vice-president is blamed for this action. Therefore Brody hates this man and consents/is happy with his being killed.
Also Dana, the daughter of Brody incidentally imitates the prayer of her father, although she does not know much about it: it seems to be quite impressive to see the Muslim prayer. It is more or less a quiet dance, where gestures are more important than words. And even the words are quite few.
Some comments talk about Islamophobia in the series, a negative image of Muslims just as terrorists. But definitely the prayer sections have a mystical and peaceful character. On the whole the series shows a very multi-ethnic and multicultural America. One special character is the veiled young women who is a specialist in bank affairs.

Last month I received volume six of the series Christian-Muslim Relations. A Bibliographical History, edited by David Thomas and John Chesworth. A new section editor for the Netherlands, I attended the yearly conference in Birmingham, September 2014. Volume 6, 890 pages, is the first volume about the 16th century. It has many different approaches. I wrote myself about Erasmus (should European countries start war against Turkish agression: 1529 in Vienna)? and Michael Servet (quoting the Qur'an as part of his attack on Trinity; became a martyr in Geneva, condemned by John Calvin). There are many other entries: British drama by Chrstiopher Marlowe about Timurlang or Tamburlaine the Great, pictured as a liberal freethinker,criticising allmajor religions. One is about Afonso de Albuquerque (pp. 318-327), the architect of the Portuguese settlements in Asia, especially in India. 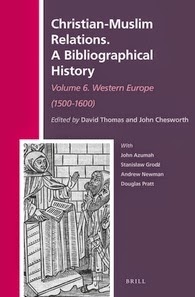 In 1909 Douwe Rinkes defended his doctoral dissertation in Leiden (under supervision of Snouck Hurgronje). One of the short statements, traditionally added to this dissertation, is as follows: It has to be regretted, with a view on the permanent global domination of the Caucasian race, that d'Alboquerque could not execute his plan to conquer Mecca. (My translation from the Dutch. In 1513 D'Albuquerque attacked Aden and so wanted to start an Arabian campaign, but he was not even successful in the attack on Aden. He died in 1515.
This brought to my mind again the debate about the difference between Dutch and Portuguese/Spanish colonialism. Were the Dutch traders and the Iberians hardline conquerers? Is this the difference between Sinbad the trader and the cowboy (as once contrasted by Fatima Mernissi, where the cowboy was George Bush)? Gerrit Knaap held his inaugural lecture on 10 October 2014 as Professor of Overseas and Colonial History in Utrecht.

Knaap makes a strong argument against those who label the Dutch East India Company or VOC as a simple trading company. His title was: The Core Business of the VOC: Market, power and inspiration from an overseas perspective. In the Netherlands the VOC behaves as a trading company, but when anaylyzing its tactics, the number of its personnel (on an expedition of 400 personnel, only few were traders, the majority soldiers) then there was a strong military basis for the trading factories. The 'trading posts' looked more like military base than as a market. The mindset of a VOC leader overseas was more that of a statesman and military than that of a trader. The VOC mindset therefore can be better defined as an imperialis attitude. 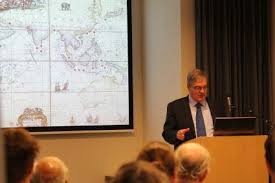 There is a possibility to contrast the 16th century Iberians as continuing the Reconquista, while Dutch (and British, French, Danish) colonialism at least began as a trading business. In fact, writing about the two brothers Houtman for volume 10 or so in this CMR series, it proved that there was a contrast: Cornelis de Houtman was a brute sailor, ready to use arms and take the stuff (pepper, nutmeg, any spices), while his brother was the diplomat who showed much more respect and interest for the people he visited. But the overall result was in fact that the Dutch were not only building an empire after 1800, after the 'trading period' of the VOC: their style of doing overseas business did in fact not so much differ from that of the Iberians. There were soft and hardline Iberians, and so it was among the Dutch.
Azyumardi Azra wrote in our History of Christianity in Indonesia a very lucid chapter II about the Race between Islam and Christianity in the Malay Archipelago, 1530-1670? He depicts the Iberians as fostering great hopes for massive conversion, which did not materialise. The Dutch were less outspoken in their religious concerns. But both parties had priorities for strong fortified settlements and political power. They did not just come as visitors for trade, but considered some permanent power basis as necessary.
In my own description (Dutch Colonialism and Indonesian Islam) I make the distinction between the first explorations (people who wrote positive descriptions of pious Muslims and quiet mosques) and later colonial officials who did not really trust Muslims. This may be corrected in this way that from the beginning there were the doves, the diplomats versus the warriors, those who sought power and domination.
Gepost door Karel Steenbrink op 00:11 Geen opmerkingen: