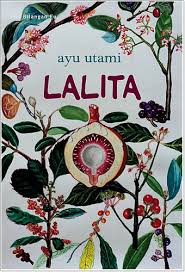 In preparation for the Euroseas Conference in Lisbon, 4-6 July 2013, I read the 2d novel in the Bilangan Fu series by Ayu Utami. It is a composition of three very different sections. The first section with the colour Indigo as title (between the light blue of jeans and violet). It has as its centre the Jakarta student and mountain climber Sandi Yuda (friend of Marja who only appears for sexual pleasures, further in the background). Yuda is preparing a climbing trip for photographers and so he arrives in a photo galery, owned by a sterile, extremely beutiful lady Lalita, rich, multi-talented (art, writes telenovelas, penulis sinetron), with heavy make-up. She seduces Yuda who experiences a very special sexual sensation called axis mundi, the 'pivot of the world'.  At the presentation of photographs (of good old Kassian Cephas) also one Jisheng is present, a Chinese from Singapore.
Lalita is interpreted as Lilith, the femme fatale of nasty old boy Iblis. But also as Lalita Vistara, the classical text that was the story of the Buddha from his birth until the first sermon. But Lalita is also a chain ina circle of reincarnations that is told in four major stages on p. 49:  1. during the 5th century living in Sriwijaya (=Sumatra) and Nepal; 2. in the later 9th century in Central Java; 3. in the 15th century in Transsylvania where she was Dracula, sucking blood in order to continue life (Yuda experiences her sexual aggression also as sucking life and energy from him); 4. now again in Indonesia.
Lalita has a twin brother Janaka (or Jataka: an earlier incarnation of the Buddha; maybe also Arjuna). Both have grandparents who were Austrian Jews, living in Indonesia and members of the Theosophy. The grandfather, Anshel  Eibenschütz has written a special book: Buku Indigo and this is a special treasury for Lalita. She shows the book to Yuda and Jinseng. In the of this section she is in danger, taken hostage. 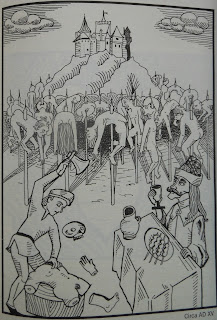 The second section is calles Hitam, Black. It is about Anshel Eibenschütz, growing up in Austria. He visits the brandnew Eiffel Tower in 1889. The family moves from Vienna to Transsylvania page 116: Vlad III, Dracula had two sons, the good one is a nice one and become a good Muslim, while the bad one is a warrior, fighting against Islam. (See the drawing above). He studies in 1907 in Vienna psychoanalysis with Simon Freud. He reads a paper on vampires as a crisis of identity. Freud is angry about his theory: the rational aspects must the irrational and not the inverse! But Carl Gustav Jung accepts this theory, that myth, the mysterious, archetypes and religious symbols can explain much of the human psyche.
Anshel comes to Java with his wife. They have children and grandchildren. He discovers the beauty of Borodbudur, as a mandala, an image of the human soul and writes or composes his Buku Indigo, with as the major theme:
Psikoanalisa Freud hanya mengajarkan manusia untuk menyadari alam nirsadarnya sendiri. Spiritualisme Buddhis mengadjarkan manusia untuk mencapai kesadaran diri dan semesta. Ya, tingkat 'kesadaran' Diri yang mempersatukan manusia dengan makrokosmos (p. 138)
The psychoanalysis of Freud only teaches that we must know that we have an unconscious level in our soul. Buddhist spirituality teaches people how to reach consciousness of oneself and of the whole world. Yes, the level of consciousness of one's Self (with a capital!) unites humans with the macrocosmos.
Page 152 has some remarks on the late Freud who started to understand this idea, through his work on Moses and monotheism, but then he died without really coming to the fulness ofthis idea. 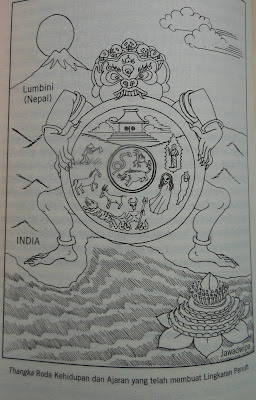 In the third section we return to the world of section one: Parang Jati (with 2x6 fingers, son of the mystical leader of Central Java) is asked to bring back the stolen Buku Indigo, so also Yuda and others. Finally Jiseng has the book: he is a Chinese secret agent and the Chinese are interested in the history of Buddism in Sumatra and Java and want not have the book. He return the Buku Indigo, although he had already taken pictures to be sent to the government in China. There are many narrative complications about the main figures and some ideas, about Hinduism (can be understood, p. 184) and Buddhism (p. 191: we will never fully understand the truth of Buddhism. There is a theory of shadows, the negative part of the real world, but only in the complementarity (also in the image of the mirror) the truth can be found.
This section is called merah or red: in 2009 the Red Book (Das rote Buch) by Carl-Gustav Jung has been published, 38 years after he died. Also Yuda will one day publish the Buku Indigo: that is the last sentence on page 243.
This is an quite complicated book with many themes that are not really elaborated. But the general symbolism in this book with elements of a detective, horror and the world of related events (à la Dan Brown) makes it fascinating reading. 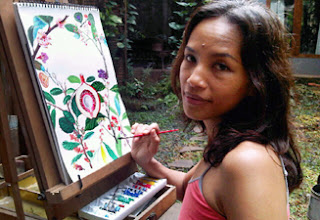 After two 'Catholic novels' (Saman, Larung), Ayu has now written two anti-monotheist novels, Bilangan Fu and Lalita. Islam is only menioned in passing with the two sons of Vlad III who had to be given to the Ottoman Sultan. While reading the passage on bayangan or shadow I wondered why the Islamic images of Hamzah Fansuri are not mentioned: just one quote from Muntahi no 10, in the translation of Syed Muhammad Naguid al-Attas (The Mysticism of Hamzah Fansuri, 1970 p. 454);
Shaykh 'Aynu'l Qudat, worshipping a dog, says: Hadha rabbi! This is my Lord!, for he does not see the dog, it is only his Lord that he sees. It is just as a person looking into a mirror; only the face reflected therein is seen by him, the mirros vanishes from his sight, for the world to his sight is like a reflection, it possesses form, but has no reality. The attribute related of the Turh Most Exalted is not the attribute related of ourselves because we see him with a veiled seeing..
Catholic theologians usually do not read Qur'an, do not read Islamic mysticism. Even ultra-orthodox or Wahhabi Muslims will not accept this kind of reasoning. But these ideas are not only found in Hinduism and Buddhism, also among the best of the Islamic tradition in Indonesia as well.


In January this year we met the Yampolskis. They just returned from the end of the world: utmost northeast Timor Leste, where Philip (together with Tinuk) carried out research on traditional music/dance/festivities. Philip is now preparing his PhD: musicologist do not really write books, they do research, make recording, like the twenty CDs made about traditional or folklore music from Indonesia.
I had nice discussion through email with Philip about Pusat Musik Liturgi, PML, in Yogyakarta, where inculturation is the slogan with Karl Prier and the choir Vocalista Sonora, conducted by Paul Widyawan. They use element from traditional music, but it is put in 4-voices harmony and so 'tamed' or at least taken out of context and made useful for the Catholic liturgy. 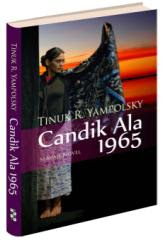 But now I want also write about his wife Tinuk. She is an artist in her own style: a teacher of Indonesian but also a writer and she wrote a very fine, quite complicated novel, Candik Ala 1965. The title is explained as red light in the air, while the earth is already darkening. (p. 14) Something like a nice sunset. It is a book about the major events of 1965: the coup in Jakarta, the counter-coup by Soeharto and the killings that were ordered by the army. This is a book with the stories seen from the viewpoint of a little girl, only six years old at the time of this event. She has four older brothers. She is the little swan at home. Her parents are teachers, Catholic. That seems to help her from being accused of being a Communist.
Tinuk told me that her father was (one of the) first to use the wayang stories and symbols for expressing the Catholoc faith. P. 28 has such ´Catholic´ stories:  there are four boys and the parents hope that at least one will become a priest, dan berharap paling tidak seorang anaknya akan menerima panggilan menjadi seorang pastor. The parents are, ´of course´ members of the Partai Katolik, at that time very strong against PKI.
P. 38 the army is a tentara semangka green outside, but red inside.
P. 58 the book is not overtly Catholic, and often the call from the minaret is heard for prayers, but the mother prays the rosary.
People disappear, come back only ten years later; at once the mother of the girl who is the center of the story comes back home from work at school and brings a boy who will stay for a long time in the house. Only later it is suggested that his family was 'removed' or 'taken away' apparently by the anti-PKI coalition of army and those who were compelled to join them.

133: quite suddenly the style of writing changes. It is now early 1980s, the girls of six now writes from the I-viewpoint and style; grown up, has become more a personality?

There are some subtle jokes: Lennon= Lenin, Marxis= Markisa. 166: Pemuka Agama or religious leaders do not have any idea of art.

Page 140-1 has a quite difficult poem about Gethsemane:

A love affair in the garden of Getsemane

I plough all the mud of my life
to the fulness of Thy body
I search the troubles of dreams
in the chaos of Thy dreams.
I plant the unrest of Thy soul
Oh,
involved in Thy doubt
the vibration of my misery.

From young age Tinuk must have been suffering with the uncertainty and the rumour, sometimes also clear information about the disaster that struck Central and East Java. The book is evoking this in a very sensitive way. Next month we will see the new movie: The Act of Killing.
Gepost door Karel Steenbrink op 10:55 Geen opmerkingen: