Friday 18 May 2012, death of Hans Teeuw, architect of modern Indonesia Studies in the Netherlands

Hans Teeuw was born as Andries Teeuw on 12 August 1921 in Gorinchem, NL. The name Andries was used for official use only and become unknown in daily use. In 1938 he became student of Indology in Leiden the common education for future colonial officials. In 1941 the war made formal study impossible. Teeuw, barely further than a brilliant BA student addressed prof. Jan Gonda and, while in hiding in different places, managed to write the draft of a Ph D Dissertation that was in 1946 accepted as his first proof of excellency: the edition and translation of the story and death of the criminal Bhoma. In 2005 an English of this work was published by Teeuw, in cooperation with Stuart Robson. In 2011 a more poetic Dutch rendering was finished by Hans Teeuw. It was his last work: now he had to prepare himself for death, not the preliminary death, of 'those who died but did not reach Death' (Bhomantaka, Canto 11:9) preceding a new and better life in this earthly regions, but the fulfillment of all duties and the act of becoming unchained.  That is Death written with a capital, also in Teeuw's translation. His wife Joosje had preceded him in late May 2009, now Hans decided to opt for starvation and reached his goal in five days. In peace and harmony. 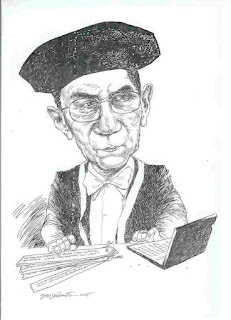 
In the uncertain period of the aftermass of the Nazi and the Pacific War, Teeuw received a government position as language researcher especially among Sasak people in Lombok. This was a hard time for him: his wife Joosje (already his fiancee in 1935 at the grammar school), had to go to Switzerland for a cure from the disease of tuberculosis, then still common in the Netherlands as well. He arrived in Jakarta, 18 September 1947 and stayed for the first time in Indonesia until October 1951. Most of this first period was spent in Jakarta, but he did also fieldwork in Lombok during one year: September 1949-15 October 1950, as if there was no drastic political change in the country!
In late 1951 Teeuw was nominated professor of comparative linguistics in Utrecht until he moved to Leiden in 1955, where he became professor of Malay and Indonesian Language and Literature. This was the start of a harsh period: colonialism had ended and there was no longer a secure position for students of 'Indology': therefore there was a minimal number of students. Willem van der Molen told me an anecdote that at the yearly session for information about studies he sought information about something absolutely different, but found Hans Teeuw sitting lonely in a room, started to talk with him and so became one of the few students of Indonesian languages and culture in the period 1955-1965. But Teeuw was active in many fields: he published his study about Lombon, more on old Javanese, but also on classical Malay (in 1966 the publication of the lovely Syair Kem Tambuhan) and started his two-volume work on Modern Indonesian Literature.
In the late 1960s the political relations between the Netherlands and Indonesia improved. Cricital and leftist students in Leiden published a booklet with the challenging title: How the Leiden Academy found again its way to Indonesia, following the return of capital investment. Teeuw was a true post-colonial scholar. He had no direct links with colonialism, loved Indonesian culture and  had also experienced hard times in Europe during a terrible war. He wanted a true cooperation between Dutch and Indonesian scholars for the best of the two countries, but first for the enrichment of both cultures. He was not only the scholar of manuscripts and linguistic research, but could handle the bureaucracy on both sides with respect and in an effective way. Sometimes he was surprised that so many funds at once were available, but he tried to do the best with it. He started BIS, Bureau Indonesische Studiën for project in the field of anthropology, linguistic and religious studies. In this way I was myself invited in 1978 to start a one year training for nine IAIN staff who came to the Netherlands. He accompanied these projects from a distance, but when necessary he intervened with the higher levels of the bureaucracy to find the practical solutions.
Indonesian students in the Netherlands were always surprised to see how Hans Teeuw could give interest also to their practical problems, welcomed them in his house. In his speeches he liked to start with giving thanks to the cleaners, the administrative staff, the drivers and other people who made academic life possible.

A special position in the last two decades was given to Pramoedya Ananta Toer. Teeuw wrote himself two books about this greatest novel writer of modern Indonesia and hoped that Toer would receive the Nobel prize for literature. Teeuw supported the translation of Toer's books and promoted him wherever he could.

If we look back at the formidable list of publications we can only be astonished about the quantity of his work: a dictionary Indonesian-Dutch with 5 editions and until five year ago, at the age of 87 Pak Teeuw was still reading TEMPO to see whether again new words had founds its way to modern Indonesian. But language was most of all communication for him: he has set the new standards for relations between the Dutch and Indonesians in the post-colonial period. Terima kasih, thank you very much, Pak Teeuw!
Gepost door Karel Steenbrink op 08:40 Geen opmerkingen: