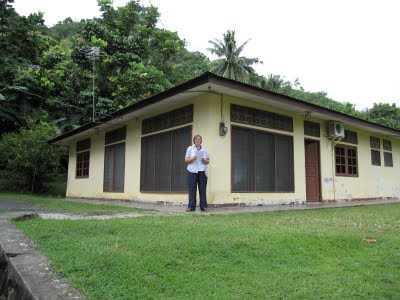 After arrival in Sentani, 3 september 2009, we stayed four days in ht Guesthous of the Cenderawasih University. The the west side of this academic institution is another one, The Protestant Theological School S. Kijne, followed the Catholic Fajar Timur Theological School. So, our lodging was quite conveneient. It was very warm in Abepura and we were happy that we had a bedroom with airconditioning (low ceiling, not much possibility for airing, because it was built for AC). However, there was a shortage of fuel in Papua (from rice to gas, drinking water in bottles, meat and vegetables: nearly everything must be imported from other regions of Indonesia) and so, we had not much profit of the airconditioning.

Because of the heat we did not walk very much here, even not short distances. There is only one major road from Sentani to Abepura and then to Jayapura. Every few seconds there is another 'taxi' small buses for public transport. Below I just insert three pictures of the bus, to give an image of the Papua people we met here. Many migrants, pendatang prefer more luxurious means of transpost. 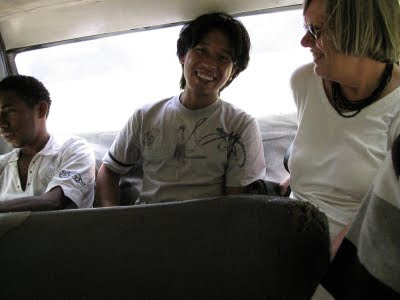 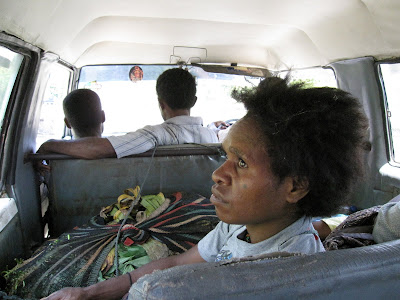 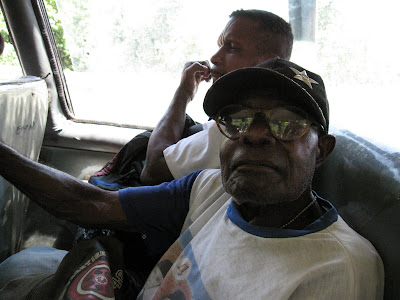 Of the three academic institutions, our main interest was of course with Fajar Timur. We had contacted before (in the Netherlands) Professor Nico Dister, who had just published a handbook of Systematic Theology in Indonesian. It was not yet available in Papua and we hope to see and discuss it later, because a truly handbook of Systematic Theology is quite exceptional for Indonesia. In Ambon we had received the name and telephone number of MSC priest Izak Resubun, a social scientist with much experience of fieldwork in Papua and the Southeastern Island like Aru and Kei. Resubun is also lecturer in church history and interested in our theme.
Emtering the compound of Fajar Timur is a peculiar experience. The entrance has the great sign of Bukit Doa or Mountain of Prayer. The New Jerusalem in Papua. 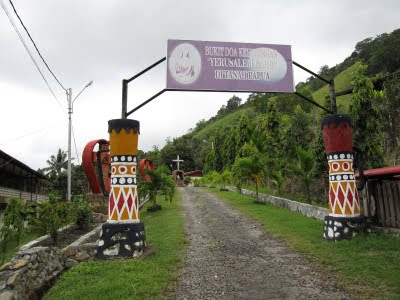 Amidst the stations of the cross the visitor walks uphill to a Marian Grotto, a lovely small chapel, but then also to the buildings of the classrooms and the well kept library with a special room for the Papua collection: many books on Papua, majority in Dutch. They are now put page by page on a scanner to make PDF files of these work. Through a partner organization in the Netherlands they will be made available for free on the Internet. (Another project is translation into Indonesia of basic texts on Papua, a private project by Franciscan priest Floor Hoogenboom in Timika/Jayapura. There are numerous programs, projects, organizations in the Netherlands that want to help Papua). The Catholics bought a big piece of land in Abepura for the theological college. There are boarding houses for male and female students at the university. There are special houses for Franciscan, Augustine, OSC students and a major one for diocesan candidates. Diocesan candidates also have to follow a Tahun Rohani in fact more or less a noviciate of diocesan priests. There is a strong movement amongst the diocesan clergy to create a lifestyle that is very close to that of the religious orders. They are calling this lifestyl and its organization Unio. It was established in 1983 and has given much self-confidence to diocesan priests. 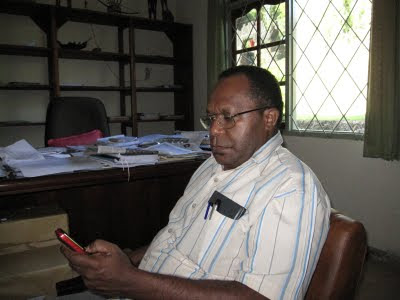 The most prominent diocesan priest in the Jayapura region definitely is Dr. Neles Tebay, born in Moanemani, Wissel/Paniai Lakes 13 February 1964. As a young boy he was in the boarding house of the High School under direction of Franciscan Friar Jan Serps. He studied at Fajar Timur in Jayapura, and, after his ordination in 1992, obtained a Masters Degree in Manilla and a Ph.D. at the Urbania University of Rome. He worked at the Diocesan Office of Jayapura for the Justitia et Pax issues and has here published a large number of statements, brochures and the impressive series Memoria Passionis di Papua, a year by year account of all kind of violations of human rights in Papua. Neles Tebay has a very lucid style of writing and is a regular author for articles in the Englis-language newspaper The Jakarta Post. Articles between 2000-2008 are published in a book Papua, its problems and possibilities for a peaceful solution. In march 2009 he has published a booklet of 50 pages on the proposal the have a dialogue between Papua and the Central Government in Jakarta, following the example of the peace talks in Aceh between GAM and the Central Government in Jakarta. Tebay has put several conditions for this talk: 1. The OTSUS, or special autonomy as granted to Papua in 2000 has not been respected by the Central Government, it is unilaterally interpreted and also violated by the Jakarta Government. It must be a to;pic of discussion how the idea trule can be implemented; 2. Papua people should be united in the idea that independence is not a good ideal for this community. They also should reject the idea that some foreign power should mediate here (also the Dutch should not be seen as possible rescuers by rejection of the 1969 act of free choice as the valid basis of the incorporation of West Papua into Indonesia). 3. Papua people must learn discipline. In the March 2009 event at the occasion of the launching of the book it was clear that Papua people like hot debates, often disagree among themselves and have no clear and realistic strategy for the fulfillment of their goals.
Among the social and political leaders in modern Papua the Catholics have given quite prominent leaders. Tebay's predecessor as rector of the Fajar Timur school, Lay theologian Agus A. Alua is now chairperson of the Majlis Rakyat Papua (some kind of 'Senate' besides the provincial council of Papua; it is a body instituted under the special autonomy law for Papua).
In his fight for Papua rights, Tebay also asks for a balanced judgment about the role and place of recent migrants in Papua: 'we cannot live here without their help'. For some time Neled Tebay was also the Vicar of the bishop, LLL or Leo Laba Ladjar who has less outspoken political messages but wants to give a more pure religious viewpoint about the present sytruggle of the Papua people.

Fajar Timur as a theological was established for candidates for the priesthood and for lay people alike, in the late 1960s and early 1970s. This is now seen as a measure taken out of the condition of the time. In the early 1970s there were not yet five candidates for the priesthood, now they have more than hundred (even a number of 160 was mentioned). Therefore the bishop has decided in 2008 to restrict access to the classes in Fajar Timur for candidates for priesthood only and in the boarding house of the school only diocesan candidates are accepted. This is done partly because the Vatican urges the promotion of diocesan clergy and Saint Peter's Funds only provide money for diocan clergy, while the religious order have their own houses close to Fajar Timur. There is still one female student and few male students at Fajar Timur, but lay people are now sent to the Catechetical College, that is established in another location in Abepura as STPK, Sekolah Tinggi Pendidikan Katolik, following the model of the catechical college, established in Malang by Father Paul Janssen CM
However, Neles Tebay wants to develop Fajar Timur in a more general way and hopes to open next yar besides the theological faculty an new department of antrology with culture studies as it most important object. Fajar Timur has always specialised in cultural studies, much more than other major seminaries and theological schools.
Gepost door Karel Steenbrink op 00:29