This is the one of 18 short impressions of the trip of Karel and Pauline Steenbrink to East Indonesia in preparation for the 3d volume of the book "Catholics in Indonesia"
The MM Sisters are a local congregation, established by the MSC priests and PBHK sisters. Different from the brothers who could not survive, they had enough vocations.
There are some striking differences between the two congregations. The PBHK (Puteri Bunda Hati Kudus, Daughters of the Methor of the Sacred Heart) have their headquarters on the prestigious Jalan Pattimura in a solid and beautiful building. The MM sisters have a very modest centre in the outskirts of Ambon, Benteng, in a compound together with a parish church and presbitery. It looked now even more shabby because the parish church of Mary, Star of the Sea (Bintang Laut) was under reconstruction.
Sister Francesco had a colleague with her, a Toraja PBHK sister who had studied law in Yogyakarta and was nominated to become her successor in the management of the charity enterprise. THe MM sisters ran several schools, but were not so expanding in other projects. When we visited them the General Suiperior with two other sisters were in Europe, to collect money. But they asked the sisters in Ambon to pray novena after novena, because their tour was not yet successful. They speak very little English or German and have not a good record of book keeping± they do not alwats respect the intentio donoris, and spend the money they receive often for other purposes than the way the promoised to the donors. The sisters for the noviciate had to stay with five in one room with very sobre furniture. Below one of the sisters in front of their Kindergarten )they had a full series of schools from Kindergarten to Senior High School. 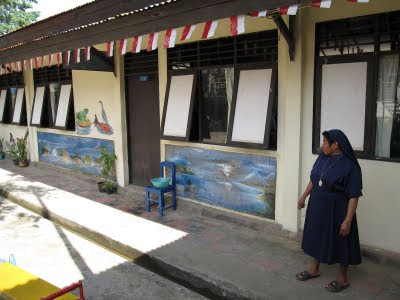 Biship Sol told as proudly about the 4 ha he had bought in Benteng for the Parish and the compound of the MM Sisters. One fine moment was the procession when the statue of Mary, Star of the Sea was taken from the harbous to this church± they came along the major mosque and also along the Silo Church where the brassband of the Protestant Church was playing hymns, to honour the new statue in this Catholic parish. This has happened already some time ago± before the religious strife. 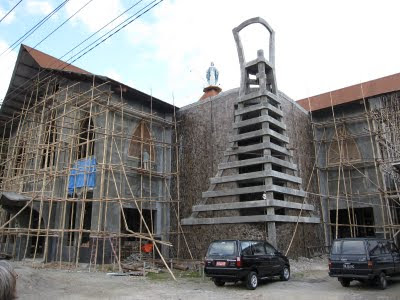