In Mid-August we enjoyed a visit from Mr Yudi Syamsudin Suyuti, his wife and daughter. Suyuti is the son (one out of seven children) of Zarkowi Soejoeti, active in the Ministry of Religion(s) of Indonesia, at several institutes of higher education, but in 1997-9 as Indonesian representative in Riyad and from 1999-2001 in Syria. In 1997 Paule and I stayed in his house in Yogyakarta, Jalan Wulung 29 (just opposite our former house on no 26), waiting for the conference in Hotel Horison, Jakarta and before and after our trip to Flores and Timor (Kupang, Atambua, up to East Timor, Dili)
The main purpose of Mr and Mrs Suyuti to NL was the enrollment of their daughter Shirley Yulianti to the University of Applies Sciences, INHolland in The Hague. 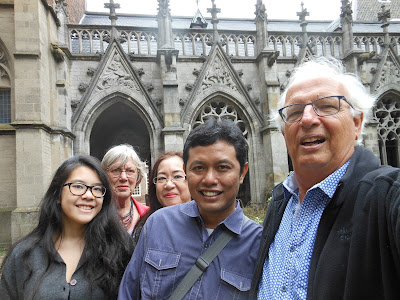 The photo is a selfie taken in the church yard of the great Saint Martin's Cathedral in Utrecht (usually called Dom). My wife Paule is standing behind with Yudi's wife Nelly. Daughter Shirley will study communication in The Hague, like her father did in Indonesia (and for three years was teaching at the UIN in Pekan Baru).
Yudi is active in UNPO, Unrepresented Nations and Peoples Organization. His business card proudly gives him the title of President for the Negara Rakyat Nusantara ... The People's State of Nusantara: 'Freedom, Solidarity, Cooperation under GOD ALMIGHTY'.
The Suyuti family is inter-religious. Although father Zarkowi was one of the authors of the Marriage Law of 1974, the couple had to evade the cruel ruling about the impossibility of a mixed Muslim-Christian marriage in present Indonesia. They went to Singapore, had their marriage blessed by a Protestant minister and returned to Jakarta to have this registered as a valid marriage. 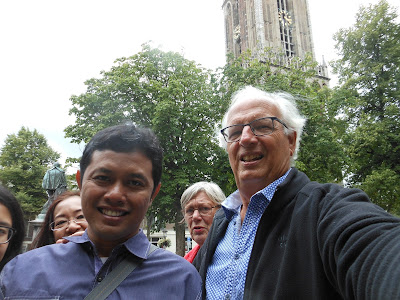 This second selfie is taken in front of the giant tower of Dom church, in fact a combination of a fortress of the Raja-Pandita, the Bishop Ruler of Mediaeval Utrecht.
We have discussion about Aceh, Lampung, Dayak and Moluccan desire for independence, until Papua. I think that Yudi is a peaceful man, and he did not like the violent action of the RMS Moluccans in the Netherlands. Also for Papua he really hopes for peace. But how democratic are these organizations God Almighty is called as a support, but it is difficult to estimate the democratic wish for a turn towards (more) independence. He is definitely an idealist and I wish him some success in making his country more democratic, more prosperous and peaceful, whether is will be within the framework of the present administration or through other, still quite insecure ways.

Big, Bigger, from Ambarawa to Manado

Next week I will be in Manado for AICIS, the Annual International Conference of Islamic Studies. I knew already that the very Protestant town of Manado has the world's largest Menoreh. But now I saw that that is also one of the largest statues of Jesus: Jesus gives his blessing to Manado. It look fancy and it is in line with the more recent development in Indonesian Christianity: withdrawing from political and social action and concentration on more devotional practice. 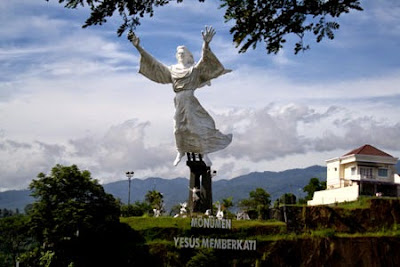 There is a nice website with the title Patung-patung agama tertinggi di Indonesia. It looks as if the largest will become the Vishnu in Bali, but it is still under construction. Last 15 August 2015 the largest statue of Mary in Indonesia and perhaps in the world, the 42 metres high Ascension of Mary in Ambarawa was with great ceremony inaugurated. There was a statue of Mary, 32 metres in Bulgaria, but now Ambarawa, Goa Kerep, is the winner! 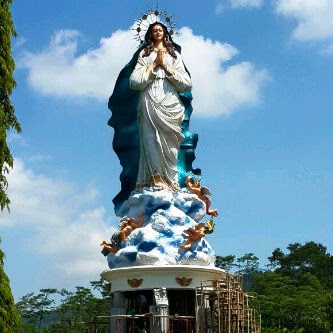 The Jesuits of Indonesia were happy and proud: on 13 August President Jokowi had a list of 46 persons who received the award of Bintang Mahaputera (Great Personality) and two of them were Jesuits: the late Piet Zoetmulder, great scholar of Old Javanese (died 1995) and Franz (von) Magnis-Suseno, born 1936 in Silesia, one of the great thinkers, analysis of Indonesian society and politics (and sometimes truly a severe critic of Soeharto, President Susilo Bambang Yudhoyono and also of Jokowo now). 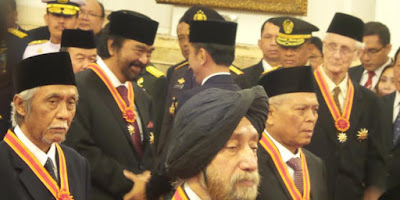 There were more interesting nominations. My late rector in Jakarta, Prof. Harun Nasution also received the nomination with the qualification of pengembang budaya moderat as a supporter of a 'moderate culture' surely for promoting Islamic independent philosophical thinking and not promoting in any style the application of the full and complete package of shari'a law, whatever it may be. Also the poet and mystical Muslim teacher Gus Mus, Nahdlatul Ulama leader Mustafo Bisri, as well as former Muhammadiyah leader Syafii Maarif received the award.
Magnis Susesno has the 'traditional' modern Turkish looking fez in black, sign of nationalism, standing utmost right here. I do not know has is the person with the sikh dress on his head.
Gepost door Karel Steenbrink op 00:39 Geen opmerkingen:

KITLV Library has now been replaced in the great University Library of Leiden. Less personnel, but still excellent facilities. One of the last books by Ayu Utami is already available here, Simple Miracles, doa dan arwah. Published in October 2014. According to texts in the book it is a sequence to the personal trilogy of living as a bachelor (Si Parasit Lajang), falling in love (Cerita Cinta Enrico) and her apology why she wanted to marry in a Catholic chapel with prayers, the official Catholic ceremony and small number of friends (Pengakuan eks Parasit Lajang). 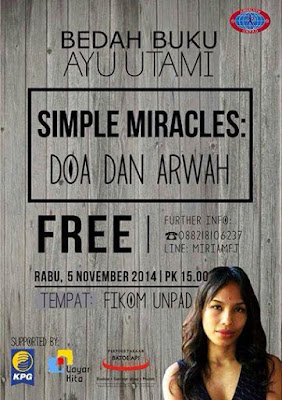 At the presentation of the Miracles book, 5 November 2014

The  book has many stories about the growing up of Utami, relations with father (often absent), mother and two aunts (always there), two sisters, Agnes and Cecilia and a brother Bonifacius, who can see spirits. It is about little things in the family, among other thing about belief in special days. The mother would like to fast on Jumat Kliwon and no go to bed before midnight on such a sacred day. Only very short it is told that between the age of 20-35 years Ayu experienced a negative period towards religion, perhaps even to be labelled atheist. But this idea is not elaborated. Also no arguments against religion and in favour of atheism are given.
The next step which she wants to present in this book is Spiritualisme Kritis. Much of the book is about the possibility of ruh, spirits of living and dead people (death and burial of her father and mother are given, Saint Carolus hospital in Jakarta). She has a general plea for a critical spirituality and talks about post-secularism that should always have a critical style. There is not much church, no nuns or priests, but easy acceptance of miracles in Lourdes, much devotion for Mary. Praying the rosary is a good fifteen minutes for personal meditation (138-140). Taboo or sacred (keramat) days and nights may become a could encounter between this rough material world and a refined universe (jagad halus). 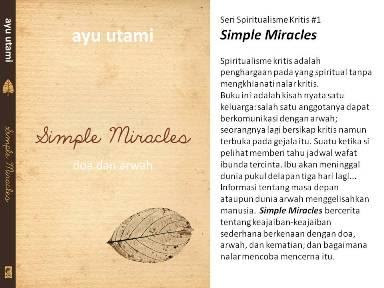 This book should be the first of (again) a series of books, on Critical Spirituality. Perhaps I was not in the right mood when I read it, but I found it not really exciting, refreshing or convincing. Bilangan Fu and related books were much more interesting for me, like also the Saman, Larung books. Or should I not be among the public she writes for?
I noticed that the spirits of ancestors are important for Ayu. Also the virgin Mary, mother of Jesus is given much sympathy and attention. But Jesus is virtually absent from her writings. Perhaps she must write a Life of Jesus, like was done by Endo Shusaku.
Gepost door Karel Steenbrink op 05:46 Geen opmerkingen:

Gerret Rouffaer (1860-1928) was born too late: he had some money, enough to live in a modest way without problems of the necessity to find a job. He had extremely many interests and could follow his personal emotions. He first started a study of science in Delft, but after two years began the great journey to see the art of France, Spain and foremost Italy. After an illness of some five years. He developed a crazy admiration for Eduard Douwes Dekker, who had written under his penn-name Multatuli the novel Max Havelaar. He also gave a big amount of his money to the great writer. Therefore Rouffaer also made his first trip to the Dutch East Indies, 1885-1890. He learned Malay, some Javanese, worked on archaeology, on adat law (organization of farmers, studies about land ownership). Again he fell ill, and recovered only in the later 1890s when he became active in the small research institute for colonial affairs, KITLV, at that time in The Hague. His first big work was the catalogue of KITLV, nicely printed as a fat book and the basis for the immense collection which has since then been the heart of this research centre, 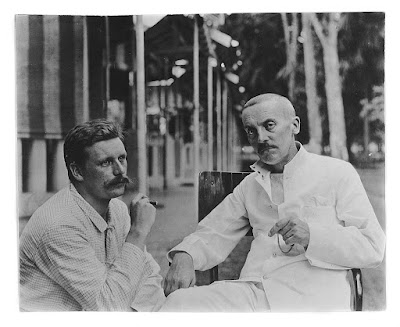 Rouffaer wrote some articles, a book on batik (published in 1914) and left again for the Dutch colony, 1908-1911. This time, after again trips in Java, he concentrated on the southeastern islands, Floresw, Timor, fell ill again in Batavgia, but made a trip to the Philippines.
Frank Okker wrote a book on this important universal scholar who also was one of the initators of the Linschoten-vereniging, the Dutch equivalent of the Haklyut Society, a series of publications of the travels of the Dutch explorers, mostly in the VOC period.

Rouffaer was a universalist: wanted to know everything, collected biology, archaeology, linguistics, history. Both in his writings and in the biography by Frank Okker, he is more a collector than a writer, more enthusiast about all kind of material that could be found than someone who could build an image of the past. Also his  enthusiasm for the social programme of Douwes Dekker, as well as his philosophy, is not elaborated in the book. So, he remains the great organising genius, without a product that can stand the time, besides the vitality of KITLV as a research centre. 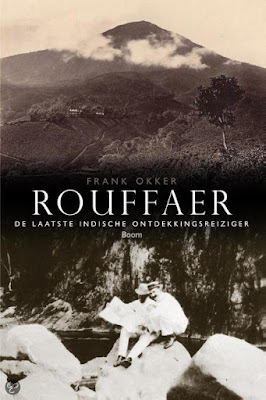 In the Netherlands we have few champions, or even excellent sportsmen and women for running, jumping and other sports/. We now have Daphne Schippers, the top or running the one hundred meter. One we have Sifan Hassan for longer distances, speciality 800 and 1500 meter. She is one of the many migrants who arrived during the last decades. She was born in 1993, 15 years when she fled from Ethiopia (2008), received her Dutch passport in 2013 and is now a famous Dutch personality.

She gave an interview to daily newspaper De Volkskrant and  did not tell much about her background, nothing about her parents. She only has some contact with her grandmother. She must have had some special reasons, because she received asylum in the Netherlands. She prays and has a somewhat longer shirt than many female athletes, but does not wear the veil. The journalist said to her: If you win a run you make a prosternation and it looks as if you thanks God. She said: 'Indeed, but I cannot really pray with shorts and my ass so high (laughing)'. The journalist: 'What ismore important: to wear the veil or being a good person for your fellow people?' Hassan: 'It does not work like that, you must be a good person as well as wear the veil.' Is this the idea of kaffah: the rules must be fulfilled without discretion between important and not?
This week I also saw a nice YouTube movie about the new church built in Calais by Ethiopian Christian refugees. They say their prayers standing, with prosternations, quite similar to the Muslims. The church is an empty place, no chairs.
Gepost door Karel Steenbrink op 02:42 Geen opmerkingen: