Since about two years I am involved in the publication of a series of books CMR, Christian-Muslim Relations, a Bibliographical History. Recently I finished an entry on Johannes Coccejus, a brilliant boy and later an inventive and mature theologian. Below I copy my description of him and his work. 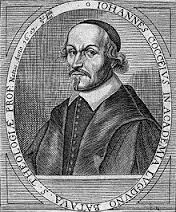 Coccejus was born in Bremen as Johann Cock (from the German town of Coch or Goch). He studied languages, philosophy and theology in Bremen and after 1626 in Franeker. He became in 1630 professor at the Gymnasium Illustre in Bremen where he taught ‘sacred philology’ concentrating on Greek and Hebrew. In 1650 he moved to Leiden. As an orthodox Reformed or Calvinist theologian he also wanted to stay in touch with humanist trends in church and society. He showed often more interest in biblical studies than in strict Calvinist orthodoxy. He is best known for his divergent opinion in the observation of the Sabbath. According to him the rest of Sabbath was a strict command for the adherents of the Jewish religion, but in the New Covenant of Jesus Christ the observation of Sabbath was no longer so important. His interpretation of Scripture is sometimes characterised as ‘baroque, inconsistent’. Besides the puritan Voetius, the dominant professor in Utrecht University, he became the most outstanding theologian of Leiden University in the 17th century. 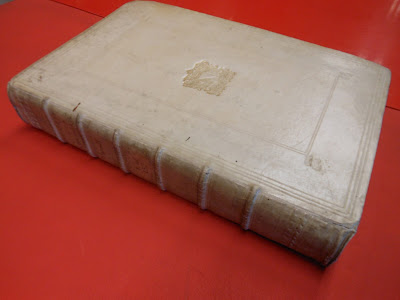 In Utrecht University Library I went to the section Special Collections and I found the most important text Coccejus wrote about Islam. Below my findings.


As a student  of 22 years in Bremen, Coccejus held a lecture on the religion of the Turcs in Greek, partly as a linguistic exercise. This text (in print 11 pages) is written as an admonition for the reformation of church and state of his time. The origin and enormous progress of Islam in his time was a great challenge for the Christian peoples. From secondary sources a life of Muhammad and the content of the Qur’an is given. Coccejus considered Islam as a mutatio religionis, a radical transformation of the true religion. Muhammad knew the real truth of God’s revelation but he has been seduced by the Satan (‘the clear enemy of the whole human race as he is rightly called in the Qur’an’). So Muhammad and his followers have become renegades (apostatae). Muslims must be counted among the heretics. The divinity of Christ was the great issue in the debate with the Jews, and later with the followers of Paul of Samosata, the Arians, the Sabellians and later again the Muslims. He considers Islam as the great outer enemy of Christianity, where the Roman Catholic church is the great inner enemy. In his later theology Coccejus developed an interpretation of the history of Christianity in seven periods. The last is that of the conversion of the Turcs to Christianity (already predicted in the Scripture). The Roman Catholic Church, an instrument of the Anti-Christ will be destroyed with the  help of the Turcs. As a sign of the soon return of Christ, Jews and Muslims will together celebrate the feast of Soekot/Tabernacles in Jerusalem. In this way Coccejus gave Islam a clear place in his eschatological vision. In the earlier Oratio this is not so outspoken. Especially in later exegetical treatises Coccejus applied texts of the Hebrew Bible to contemporary Islam. Isaias 45:14 about ‘the tall Sabeans .. will bow down before you’ refers to the great power of the Ottoman empire, but also predicts their coming conversion. The four wings of the beast of Daniel 7:6 refer to the four realms of the Roman Empire which were conquered by the Muslims: Syria, Africa, Asia and Greece. The ‘kings from the East’ of Rev. 16:12 were by him seen as the preparation for the end of time, when the ‘Turcs will come to the West again and all efforts will be made to preach the Gospel to them, so that they may convert.’ The peace of Westphalia (1648) was a beginning for this process and so the end of the world was expected in 1667 with the final triumph of the Reformed Church in a common service to God. 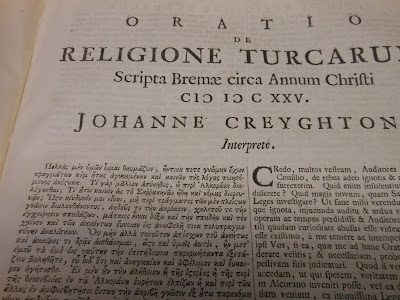 Dr. Chaider Bamualim and his interpretation of Religion in West-Java

9 September 2015 Chaidar S. Bamualim defended his dissertation in the ceremonial room of Leiden University. It was early in the morning: 10.00, but nice conditions. 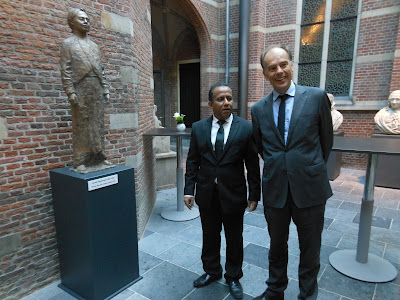 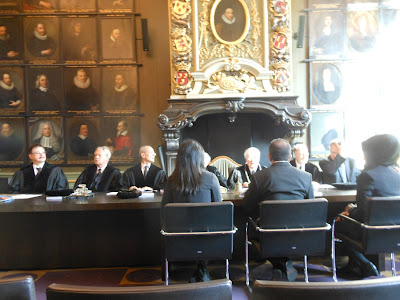 The first picture shows Chaidar together with Carel Stolker, Rector of Leiden University, in front of the statue of the first Indonesian  doctor of this university, Dr. Hoesein Djajadiningrat. Leiden University is fond of old and new traditions (mos or the equivalent of adat). One of these is that there must be a picture of the first and all later Indonesian Doctores.
The second picture is during the examination of 45 minutes with the living professors sitting in front of a great wall with pictures of their ancestors.

Chaidar was during a long period an assistant to Merle Ricklefs who wrote his trilogy on the history of Islam in Java. Especially for the recent period (1930-2010) Chaidar worked on the period when the contrast santri-abangan was very important and then declined after the 1980s. Chaidar pays much attention to two kebatinan or aliran kepercayaan, new Javanese religions. First is the Madrais of the Kuningan-Cigugur region. Second is the AKP, Aliran Kebatinan Perjalanan, risen in 1927 (about the same time as the official recognition of Madrais), developed in the 1950s, banned in 1967. Against a move towards more orthodox Islam (as represented by PERSIS, but also by dakwah at the ITB Campus), there was also a side move towards Christianity. Christianity (not mentioned at all in the famous book by Clifford Geertz, Religion of Java) even turned into Islam's Greatest Opponent (263). Up to recent clashes between (FPI) Muslims and Christians like the HKBP Church in Bekasi, are discussed. Bamualim's book is more a weighed analysis of the developments than a detailed description. Readers will need good background information to understand the many aspects that are touched upon in this rich book. 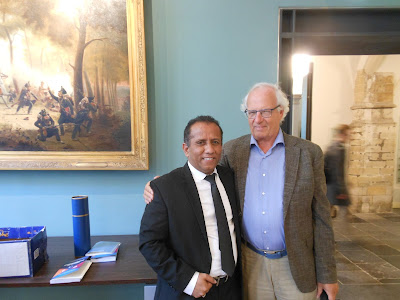 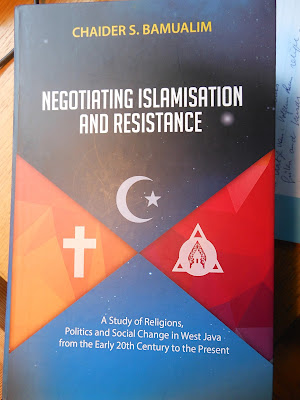 Above a picture of the fresh doctor with myself. Below the cover of the book with three symbols: cross for Christianity, rising moon and start for Islam and the gunungan or symbol of the wayang shadow play for the 'traditional' or even 'new' Javanese spiritualities. Representing the new pluralism in West Java. Thank you Chaidar for this often surprising and balanced book: from PERSIS and Darul Islam up to FPI and Dakwah at ITB. About the astonishing high number of Protestant Churches: 232 in Bogor and 196 in Bandung: sign of the immense spread and fragmentation of Protestant Christianity!
Gepost door Karel Steenbrink op 01:23 Geen opmerkingen:

Corrections for "Catholics in Independent Indonesia"

For the new book, Catholics in Independent Indonesia, 1945-2010, I received a full page review by Azyumardi Azra in Kompas, 9 August 2015. There were also private messages with nice comments.
Adolf Heuken sent a supporting letter from Jakarta: most of this period was for him a personal memory and he liked the book very much.
Some small comments:
page 13: People of Flores, who in 1950 wanted to join the Indonesian United Republic, later felt mistreated because promises about regional autonomy were not kept, according to Pak Riberu.
Page 21: Father Daniels never was a friend of Father Joop Beek, because Beek took the best stuidents from the Catholuc Students' Union PMKRI for Kasebul.
Pages 36/49: the fights in Ambon were planned by the military, as well as the Ketapang riots in Jakarta. Later this was continued against Gus Dur as president. Laskar Jihad was supported by the military.
Page 90: Karl Prier is not Belgium but German! - On the same page, note 23, the translation for Cipta Loka Caraka given by Jan Bakker was 'a place (loka) from where a herald (caraka) spreads good ideas (cipta).' It is all Sanskrit words.
Page 473: Secretary Leo Zwaans was not allowed to leave the premises of the Jakarta Cathedral during the Japanese administration.
Page 488 Bishop Leo Soekoto was not the son of a goat shepherd but of the village chief, lurah. But still from a mountain village.
Page 488: The church in Taosebio was built as a mansion in the beginning of the 16th century (this is: in the old centre of Jakatra; about one century before Coen founded Batavia). But the Chinese temple or klenteng Jin de Yuan, behind the church (burnt down in 2015), was built about 1650.

So far some remarks by this learned Jesuit who calls the book a wertvolles Buch. Darin zu lesen macht viel Freude. 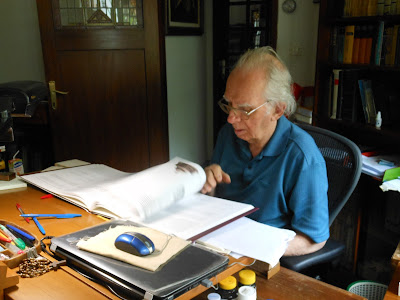 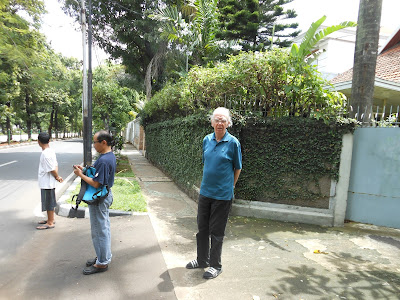 Adolf Heuken in December 2013 (before I went to Kupang for the first meeting of ASAKKIA). Above in his working room, below in front of the walled house in Mentang, Jalan Muhammad Yamin 37, where he stayed for some time after 1968 with Joop Beek SJ, then alone with staff of CLC. In front of him another Jesuit, Greg Soetomo.
Gepost door Karel Steenbrink op 00:33 Geen opmerkingen: