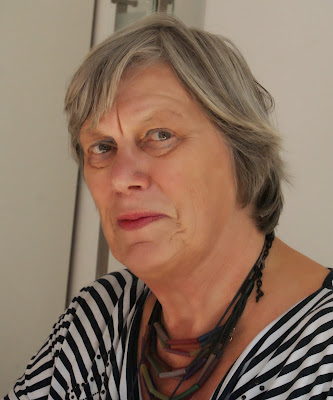 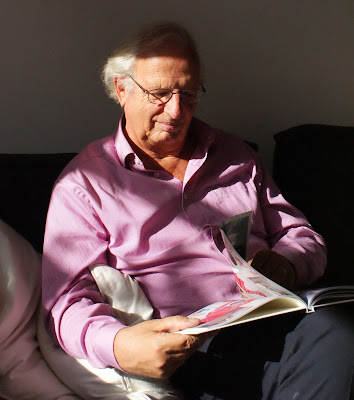 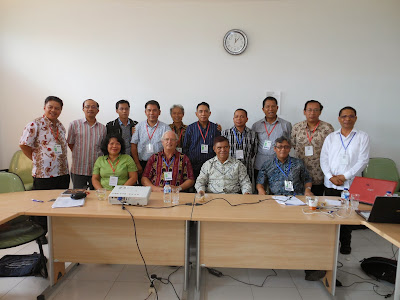 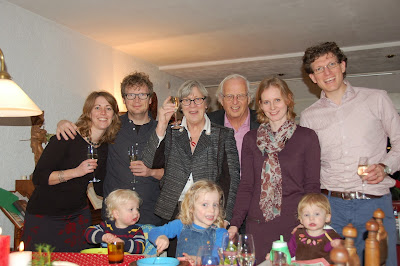 ASSAKIA C: others members and discussion about strategies

ASSAKIA stand for the Association of Christian Islamologists in Indonesia, constituted for at a meeting in Kupang, 9-10 December 2013. In my previous blogs I have given some details about the preparation and the procedures, more still about some of the major members.
Here I will add some more about two members and then about the important topics of the discussion. 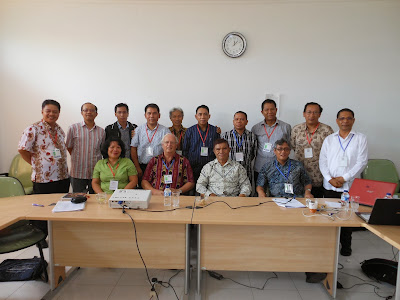 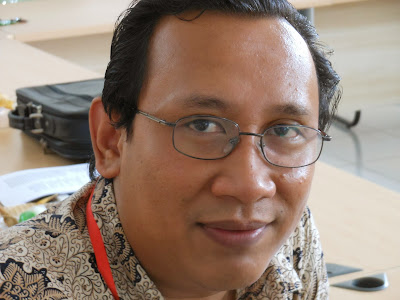 Above here the core members at its start of ASAKKIA, with on the first row, second from right, the chairman of MUI Kupang. Second row, second from right is the coming man for Islam at UKDW in Yogyakarta, Wahyu Nugroho (to become the successor to the 'old man' from Islamic Studies in Protestant Indonesia, Djoko Soetopo).  Wahyu has finished his dissertation and will defend it in Rostock with Klaus Hock as Doktorvater. He writes on Nashbandiya in Indonesia with a special interest for the Turkish connection. It will be more about the Cyprus-Shaykh Nazim and the Haqqani branch than about the Gülen spirituality which is not really considered as some mystical movement.
Daniel Suyarmo has a very special personal history. He comes from a pious Muslims family and has some experiece of living in a pesantren, at least in a santri community. He was at a Catholic highschool in Ambarawa when he converted to Christianity, the Evangelical rather than the Catholic tradition. He joined the STII theological school in Yogyakarta, UKRIM of Universitas Kristen Emanuel in Kalasan, east of Yogyakarta where Chris Marantika is the great leader. His master degree in theology was at the more liberal- socially engaged UKSW in Salatiga.
is Daniel is now teaching at the Kijne School of theology in Abepura/Papua. He is close to At Ipenburg who also was teaching for quite many years at this school. He has a quote about Neles Tebai: 'Papuas should not be talking about merdeka or independence: do you really like to have a failed state like Timor Leste?' Improving the fate of Papuas is not helped by revolutionary, let alone violent attacks. He came all the way from Sentani: through Makassar and then to Jakarta, following a transit to Kupang. On his way back he will take the same detour, but make a stop in Central Java to see his family.

This ASAKKIA is much different from its approach to Islam than Hendrik Kraemer. They have no hope that Muslims in Indonesia will convert to become Christians. They are happy when there are good relations and in the texts for the conference it has become very clear that inter-religious harmony, peace, understanding, are the main, even the only goals for their association. They see Evangelical and Pentecostal Christian often as a disturbance for the real goal of Christian Churches: that they may live in peace and harmony. The positive goal is often proclaimed, but the negative one: to abstain from strategies of conversion, of propagatioon the Christian faith, is not well-funded and not openly stated. One of the goals of the association has to be that there should be a clear policy, also made clear without any doubt to people outside Christianity that there must be freedom of religion (personal choice for change), but no aggressive or even wel planned stratege to obtain more adherents. The 1966 consultation (after the Makassar riots of October 1966) failed in this sense and there should be a renewed effort to formulate such a policy.

Do Christian theologians have the obligation to know (much) about Islam? Perhaps this is too much as to formal doctrine, but individual meetings, personal contacts must be sought. Although I am very glad with the larger number of specialists in the field of Islamic Studies than in the period 1970-2000, I was then happy to see that many theological schools hired well educated liberal scholars of Islam like Djohan Effendi and Kautsar Azhar at Driyarkara in Jakarta. It can be better to have a Muslim teaching this subject at a Christian theological school. The first issue of discussion and sharing about the members in Kupang was exactly this: how to teach Islam to Christian students of theology?
I hope that ASSAKIA may become an enlightening factor in this whole process in Indonesia.
Gepost door Karel Steenbrink op 06:27 Geen opmerkingen: