The debate about religion was rather calm in the first decades of Soeharto's Orde Baru, but became hotter in the 1990s and has continued since then. The expectation that the second presidency of Yudhoyono would be a calmer period has not been fulfilled. In April the Constitutional Court has accepted the wordings of the anti-blasphemny law (Undang-undang penodaan agama. This law not only wants to regulate blasphemy of God and recognised religions, but also gives the state the authority to ban heresies. So, some kind of state inquisition? Some fear that freedom of religion will be restricted further. This law has been the legal ground for the ban on Ahmadiyyah in Indonesia.

Azyumardi Azra was not happy with the verdict but said to Jakarta Post on 21 April, “Now that the court has decided to uphold the law, what we can do is to ensure fair trials for them.” Judges, he added, had to be given guidance on what constitutes a blasphemous or heretical act. “This is even more important considering many of our judges are conservative [in their ways of thinking],” he added. Azra said he believed there were legislators at the House who share concerns for religious tolerance and maintaining the country’s pluralism. “We should start with them,” he said, adding the Religious Affairs Ministry could not be relied on to initiate the expected revision.

A new case is now the fatwa against the South African cartoon, portraying the prophet Muhammad on a sofa at a psychiater, complaining that he has a congregation that has 'no sense of humour'. Azyumardi again gave a comment to the Jakarta Post: Muslim scholar Azyumardi Azra dismissed the notion that the recurrent collision of values between the liberals and the Muslim world underlined the failure of the many interfaith dialogues held by the two sides to ease conflict. “This only shows that we need more dialogue.”

Is there indeed a lack of sense of humour with Muslims? In the Netherlands the convert Abdulwahid van Bommel has written a book on this subject: Valt er nog wat te lachen met die moslims? (Amsterdam: Bulaaq 2007: "Can we still laugh together with Muslims?") Van Bommel shows cartoons and tells stories about Hoja Nasruddin, the famous Turkish joker with his aphorisms and practical jokes full of wisdom. 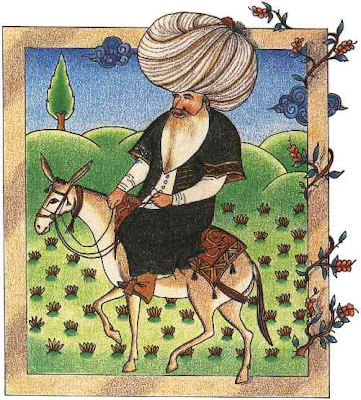 Just one story: Nobody paid attention to Hoja Nasruddin at the feast where he was invited and he attended in his casual clothings. So Hoja ran home and put on his fur and came back to the house where the feast took place. They invited him to the seat of honour and treated him with much respect. When the table was set, they offered the best place to Nasruddin. The Hoja, by plunging the collar of his fur into the soup bowl, started saying: 'Here, Eat, my fur, eat!'' Upon the questioning of surprised people, he answered: 'The hospitality is to the fur, so it deserves the meal.'

Van Bommel is now busy, translating the Masnawi by Jalaluddin Rumi into Dutch. Also here many lighthearted verses are mixed with wise and more serious admonitions. 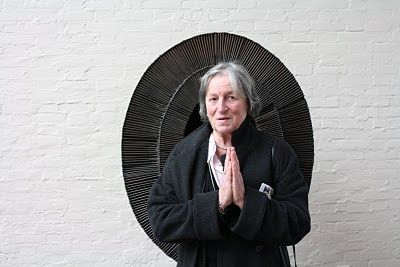 Quite recently we visited the Kröller-Muller Museum for Modern in the nature reserve, Hoge Veluwe. There I took a picture of my sister in law, standing for a piece of art. Isn't she pretty? Now she looks like a saint, or even the host in a monstrans, as was used during the evening adoration in our Catholic churches. Is this humour or cynism? Truly believing people always know that religious symbolism is just the material, earthly style of religion and we should not exaggerate our veneration for these earthly expressions. The Wahhabi rulers, after conquering the city of Medina in 1925 or somewhat later. They started even to demolish the grave of the Prophet Muhammad, for fear that people should venerate him too much. The action took the life of one of the workers when a big stone fell of the building in a first attempt to destroy this great mosque. And now? Even a clumsy cartoon causes much trouble!
Gepost door Karel Steenbrink op 01:30 Geen opmerkingen:

Recently four books were published about Franciscan Friars in Indonesia.
The first published was Eddy Kristiyanto, Khresna mencari raga. Mengenang Kehadiran Fransiskan (di) Indonesia (Yogyakarta: Lamalera, 2009. The 756 pages of the book present 70 documents in Indonesian, but also Latin, Dutch or English (part 3). A first part discusses the older history intil 1929. The central second part is about Franciscan Friars between 1929-2009 (but not the Capuchin Friars, nor the many sisters with a Franciscan spirituality. Because the Saint Michael Custody does not include the great Papua section, only short references to that history are made (some stories about Leo Laba Ladjar, now bishop of Jayapura). This quite loosely written book with nice anecdotes, much institutional history, concentrates on the internal history of the Franciscans. The title can be read as: the divine Krishna seeks a concrete body. In Sndanese (and Javanese) popular stories the great text of Mahabharata is retold and here Krishna is a vir dei, a 'man of God' like Sant Francis (introduction:liv-lvi). 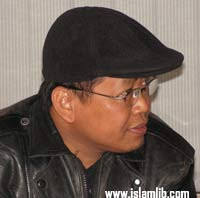 While reading in this book a see Romo Eddy as a joyful, selfconfident, and well educated successor to Saint Francis, able to speak to the academic world and to common people as well.
In this period I received through the kind help of Bishop Jan de Kok, the Dutch text of the history of the Javanese Franciscans by Anton Baan. It was written in Dutch as Nederlandse Minderbroeders in Indonesië, 1929-1983 in 1998 and was translated into Indonesian in 2004. Kristiyanto quotes Baan only 13 times (against Steenbrink's Orang-orasng Katolik di indonesia 10 times, while the last book only presents the history until 1942. He has the much looser style. A nice word is on page 165: kaplingisasi as a criticism of dividing the Indonesian territory into districts for different religious orders. 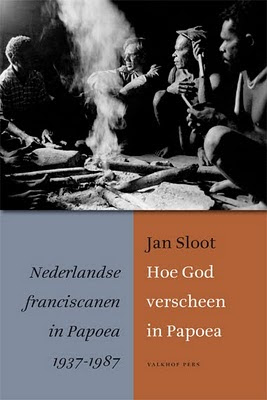 The third book is by Jan Sloot, Hoe God verscheen in Papoea. Nederlandse franciscanen in Papoea, 1937-1987 (Nijmegen:Valkhof Pers, 2010, 416). It was presented in a festive meeting in Alverna, close to Nijmegen, on 29 April 2010. Jan Sloot was three decades (1954 tot 1985) a member of the Franciscan order, worked between 1961-7 in Japan. He was asked to write this book. After thorough research in the very rich archives and a trip to the region with its great contrasts (coast, Paniai Lakes, Balim Valley, southern region of Agats). It has to be regretted that the book (like all publications discussed here) do not present the last decades: it halts in the 1980s.

The last book is by Frans Lieshout, born in 1935 and since 1964 a missionary in Indonesian Papua. His book about the small but quite densely populated Balim Valley is written for the local population: with many small details of villages, families, extended versions of local myths, quite a few words in Balim language like honai for a recemonial place, kain for a chief. There is a long story about teacher Agustinus Kabes (from Fak-Fak), killed by someone from Balim and now seen as the first martyr of the mission (131-150).
While reading this local history I wonder how much I still have to read before I will start writing a much more distant and shorter history of this part of Catholics in Indonesia, 1945-2010?
Gepost door Karel Steenbrink op 01:59 Geen opmerkingen: