In 2013 the Gülen sympathizers organized a first big national event under the name of SANAT, Stichting Aanmoediging Nederlands Art Talent, Foundation for Promoting Dutch Art Talent. It is more or less concentrated around local networks of Gülen people, probably close to the Cosmicus Schools. It can be seen as a preparation for the annual 'Olympic Musical Performance' which brings together Gülen friends for a musical festival, promoting peace, religious understanding and harmony in Istanbul. Some of it is shown in the movie Selam (2013, see the book Gülen-Inspired Hizmet in Europe, page 42).
This year there will be two sessions in the Netherlands: the smaller one for about 400 people was in the new audience hall of the Peace Palace in the Hague 21 April. Another event will be in the great theatre Doelen of Rotterdam, mid May. 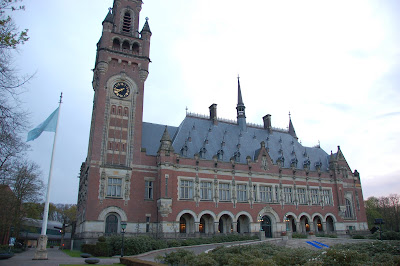 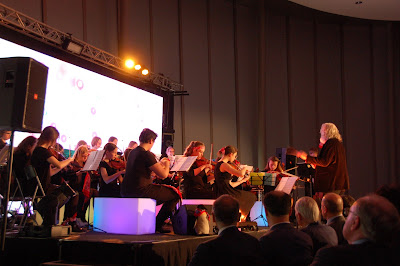 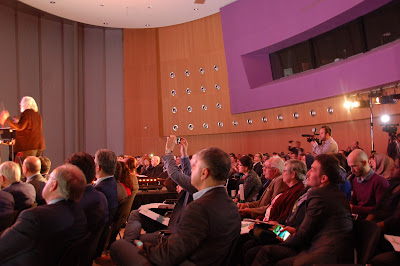 The main building was paid by American philanthropist Carnegie and opened in 1913. A few years ago a smaller extension in modern style was added. The event opened with music by a youth orchestra from Utrecht. Some 20 small singers and dancers followed, most with modern songs, love songs, romantic ideas. Very special was a Syrian boy who had left Aleppo some 18 months ago and thanked the Dutch society for receiving his family. He spoke fairly fluent asnd beautiful Dutch.
Quite many people from the Gülen family were known to me, like politician Alaatin Erdal, Dialogue centre leader Alper Alasag, leader of the Dutch edition of Zaman, Mehmet Cerit. HOGIAF Business leader Adem Kuncu had come from Brussels.
A few members of the national parliament give a talk (two from the socialist party, one from the Christian Democrats). Vecih Er, president of the SANAT organisation spoke a word of welcome. He praised the sponsors and emphasized that this was meant as an intercultural Dutch event, promoting harmony. This is true, although I saw it also as the yearly warm meeting of the Gülen family. Some outsiders also were seated in prominent places. One of these was Muhammad Sini, a big name in Dutch-Moroccan organizations. He was twelve years the director of a great vocational school in Utrecht. Now he is working with the ministry of Justice for the national police. He was some 15 years ago also involved in the planning of the academic training of imams. At that moment I was defending an initiative of cooperation between Utrecht University and the Islamic University of Rotterdam. It had no chance due to political decisions, to give the money for this academic training and education to Leiden University and to the Free University of Amsterdam. In fact, both initiatives are now closed and the Islamic University of Rotterdam is still flourishing with quite many students. Also in Utrecht academic study of Islam continues, but the cooperation that was not wanted by Sini (and the minister of education) never developed further. 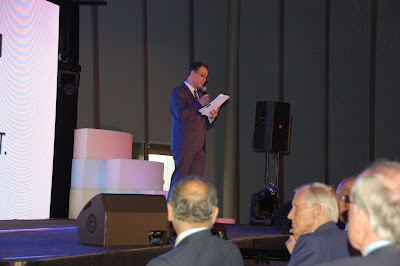 Above we see Vecih Er speaking. Sitting is stil the major speaker of the evening, second from left, former Dutch Minister of Foreign Affairs Ben Bot, also now the chair of the foundation of the Peace Palace. He sketched that negotiations are always better than fighting and the peace palace is made for negotiations, for problems that must be solved through talking between parties.
There was a song on a text by Yunus Emre. Four boys and three girls gave a very lively dance performance. There was also one Indonesian singer, Wulan, a small girl of 12 years, still finishing now her primary school. She sang a lyric by Adele about love:Rolling in the deep ... There's a fire starting in my heart ... you had my heart inside of your hands.. Notwithstanding her youth she was one of the best singers and probably therefore played neary last (only a Turkish comic, singing in Dutch, coming after her). 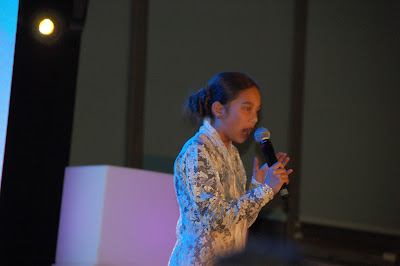 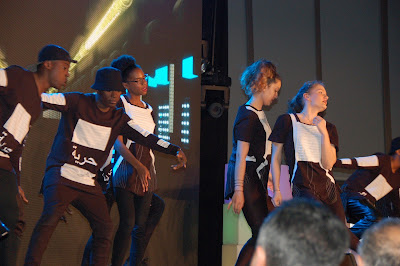 In a fast rhythm one group after another gave a performance. The whole session was introduced and accompanied by a very well speaker and there was indeed a great variety of Dutch muticultural society shown on the podium. In the hall itself only some 10-15% were not Turkish. The name of Fethullah Gülen was never mentioned and only insiders would know that this is also (besides the school, the dialogue centre, the business community, the publications) part of this dynamic movement.
I heard that the major sponsor of this evening, a Supermarket and restaurant owner in Rotterdam, now faces much difficulties because Erdogan supporters in the Netherlands no longer want to buy in his shops because he is known more or less as  'siding with Gülen'.  Also the Dutch edition of Zaman has since a few months less income through advertising because Turkish business people hesitate to be connected to him.
Thank you, Vecih Er for organising this already during four years!
Gepost door Karel Steenbrink op 07:16 Geen opmerkingen:

The magic flight of Heri Dono

Volker Kuester was a colleague in Utrecht, 20 years ago. Since then he has moved to Kampen and since some six myears to Mainz, where he teaches intercultural theology. He has always had much interest for religious art and is preparing a new book on Christian art of Indonesia. The terminology of' 'Christian' is sometimes rather confused, because the artist often like to take traditional motives and just call it 'inculturated in Christianity'. We correspond about some aspects of art. Last questions were twofold: some about names for churches, which are quite secular in Indonesia: Gereja Manahan or Manahan Church is just called after a district of Solo which is best known for its football-stadium.
He sent me also a painting by Heri Dono. 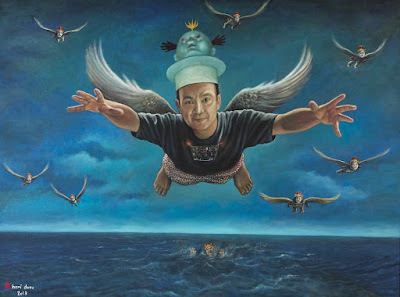 This is a magic/mysterious painting. I found a discussion of it on a blog in Indonesian by Yustina Probowati dated May 30, 2013. I give a free translation and some comments.
The title Kakang Kawah Adik Ari-ari  means: the older brother (kakang, not kagang as Volker wrote!) is the water breaking at the end of pregnancy and preceding delivery of a child (amniotic fluid; literally kawah means crater, here the volcanic eruption is identified as the delivery); the younger brother/sister (﻿adik) is the placenta or afterbirth (﻿ari-ari). It seems to be a Javanese proverb, indicating two mighty protecting spirits: the amniotic water and the afterbirth. I think that the man fleeing here is the afterbirth, flying over the amniotic water, accompanied by many similar protecting spirits. They are called the Army of the Lord, protecting and also giving active help to the embryo while still in the process of growing before birth. The two powers are very important in this period of development and will remain it afterwards. All Javanese Ancestors believed that their 'spirits' always followed human beings after birth and they remain loyal friend for the persons. They become the 'army' which accompanies man in his/her life.
The meaning of this painting is that God is always with us in our life and nobody is a lonely being. This tells us something about the goodness of God. Do you agree? What do you think about this?  There were no further comments by Yustina Probowati. I found here a rather easy transition from the world with many spirits to monotheism. In fluid harmony without critical, sophisticated but also proud, even swollen orthodoxy. This is lovely and festive like the birth of a baby always should be.
Gepost door Karel Steenbrink op 02:12 Geen opmerkingen:

The magic of the real thing: Diponegoro in Amsterdam

I wrote already about the presentation of the book by Harm Stevens on the history of Indonesia and the Netherlands as stored in the Rijksmuseum of Amsterdam. Now I have read the book by Harm Stevens and I want to highlight some of its major issues.
Like everything connected with the colonial period, it is sensitive, and even modern Dutch people feel obliged to write in a very politically correct way and to apologise for thing the ancestors did. I do not think this is necessary. We can together with Indonesians look at what cannot be changed, what has happened and what is our common past: a colonial period. 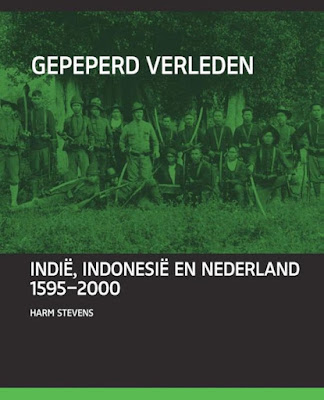 There are two items in this book that are important for the religious sentiments related to this past. First are the banners, shield and sword, related to colonial fighting in Aceh. One banner, conquered onthe Acehnese in Barus, 1840, was taken by a soldier who died in the attack. It is a blood-banner and so the real thing. It is not a piece of art, selected for its beauty but for its story and the memory of the soldier, Carel Heinrich Bischoff, born in Germany like so many Europeans in the colonial army.

The second subject is Diponegoro. In the Rijksmuseum it is depicted twice. The first is a drawing describing the 'surrender of the terrorist' as the Dutch called him. It was made by Jan Bik, a colonial official who had te make drawings, but also functioned as the one who had to guard Diponegoro in prison. his drawing was not an official document and so  was used to make a lithography in 1835 to glorify the Dutch victory. It was later again used to be printed on the banknote of one hundred rupiah. 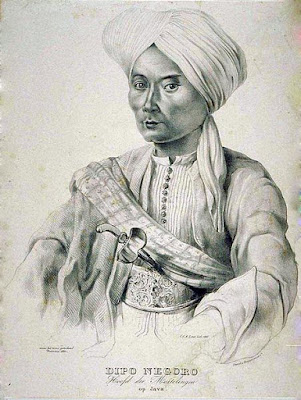 A second image of Diponegoro in the Rijksmuseum is called 'The surrender of Diponegoro', although others considers this as the moment of  the 'treason of the Dutch negotiators' who took Diponegoro by violence while he thought that he had come just to negotiate. The hero on this painting of Nicolaas Pieneman (in Amsterdam) probably based on a sketch by Francois de Stuers, son-in-law  of the Dutch General De Kock.It is not Diponegoro who is in the centre, but De Kock in whose honour this was made, but it still has the title of 'The surrender of the terrorist'. (However, in my second view it has something like the classical Ecce Homo painting, where Pilate shows Jesus to the Jews and asks whether he shall free Jesus or not!) 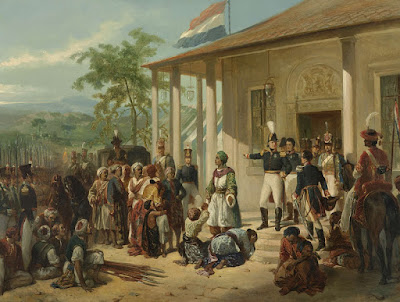 There is a third image of the event: at a later stage painted by Raden Saleh. Here Diponegoro stands slightly higher and at least more prominent in the centre than general De Kock and he is the most important person in the painting. Also the persons in front of him are not bowing so deep as in the Dutch painting by Pieneman. Although Raden Saleh stayed for a long time in Europe he seems here to depict somehwhat more the Indonesian feeling than those of the European colonisers.
If the museums are the new churches, their content is open for all kind of new interpretatyions, new emotions and feelings as well. 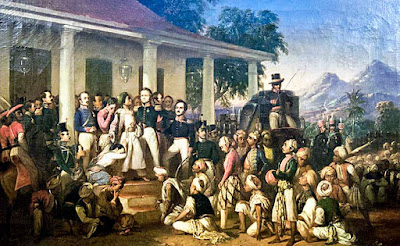