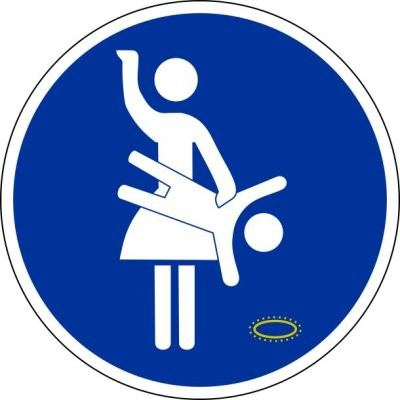 This is our more or less traditional end-of-the-year letter with a short report of our present condition and best wishes for all our friends. As to the first theme: there are so many blogs written here that we feel it not necessary to give more information. Paule and Karel are happy to stay in good mental and physical health (the only major inconvenience this year was the broken arm of Paule due to the heavy snow early this year). We were very happy with the same condition for our children with one more serious exception: Irene Vink, wife of Stijn, had a very serious injury in her left knee in a bicycle incident in The Hague, where here bicycle entered the rail of the local tram. She fell in an unlucky way and had to stay at home for nearly three months, still working through electronic means and only few times visiting the office of her company. Our granddaughter Sophie is a happy and eager small girl, thoughtful and quiet. She gives us and her parents Irene and Stijn much joy.
Floris and Inge are doing very well too in Amsterdam. They finished the renovation of their house and cared for the spacious garden, stayed in good physical condition with running, cycling and skating.
Karel was quite busy with work in Kampen (until August, replacement for a colleague with a sabbatical) and for courses for adult people. The last candidate for a doctoral dissertation, Fredrik Doeka, stayed in our house for two months (September-October) and all this work prevented Karel from writing seriously for the 3d volume of Catholics in Indonesia. But two books will be published soon: the English translation of The Jesus verses in the Qur'an and a commentary on the 2d Sura of the Qur'an.

In our Dutch weblog I wrote a meditation on the discussion we had in our Church of St John, related to the inauguration speech of Jesus in Luke 4,14-21: where he announces a man who receives the Spirit of the Lord, anointment and will bring good news to the poor, prisoners and the blind. The people of Nazareth are not convinced and remain quite sceptical. The Prince of Peace he is called and also the angels, according to the story of Christmas, sing about peace on earth. But what has become reality after this declaration of a new programme? Not everything of these promise has been realized, even quite little. Therefore no traditional sweet image of Mary and Jesus, but an angry Mary who punished this little Lord Jesus! 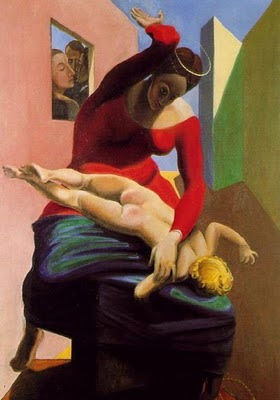 This is a painting by Max Ernst from 1926. Maria has a red underdress(indicating the divine character of Jesus) and then a blue robe (for the full human nature of Jesus). Jesus´ crown has fallen and so he becomes a common child. There are three witnesses± friends of Max Ernst. Not all Big Words of Jesus and his biographers have been realized. We must be happy with the small things, the rays of light that we see in this world. We are more than satisfied with that and we wish all our readers a reasonable portion of this light and happiness.
With best wishes for 2011!! Karel and Pauline Steenbrink
Gepost door Karel Steenbrink op 02:59 Geen opmerkingen: 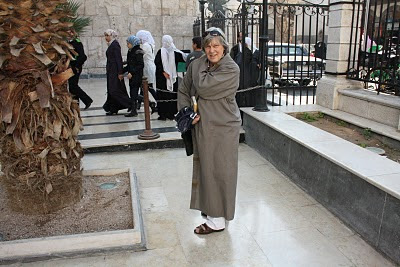 This contribution to the weblog has been written as a report at the end of the year 2010 on personal and family matters. We are happy to communicate that we had a rather quiet year. There were some physical inconveniences: Paule broke her right arm during the heavy snow of January-February but it is now Ok again. Irene, wife of Stijn, fell in September in The Hague, while getting into a tram rail. This was a very serious injury because the knee was broken at several weak points. She was operated and bound to her house and her bed for nearly two months and is now recovering slowly. With the baby Sophie in the house this was quite difficult sometimes and we went more often than before The Hague. It brought us also closer to the first granddaughter.
Our activities were as before: Karel taught frequently for the Senior Academy of Eindhoven en Doetinchem, sometimes for his former faculty and for various occasions. Fredrik Doeka was in our house for two months between 24 August August and late October. We do hope that his thesis on Moses in Indonesian Muslim and Christian Discourse can be defended in 2011.
We made shorter and two longer trips. One longer trip was to the United States in June. From 26 November-5 December 2010 we travelled for ten days in Syria. Here we show you the two of us against a Syrian background. We first stayed two nights in Damascus and then drove a small Hyundai to Palmyra, Aleppo, Hama to return for three more days in Damascus, a twon of 7 million people )ten times as much as in 1970!'
Damascus and Aleppo have been cities for more than 3000 years. This is most visible in the great Ummayad Mosque of Damascus: once it was a temple for the Fenician deity Haddad, for the Roman Jupiter, the Greek Zeus, for Jesus and Mary as a Byzantine Cathedral of Saint John the Baptist and now a mosque that still has the grave of Yahya ibn Zakarya or John the Baptist in its major prayer hall. Above we see Pauline in this mosque, neatly dressed up with facilities for tourists, that also must be used for Syrian female visitors who wear trausors. Below we see her in the Straight Street (Shara' Mustaqim in a French-style restaurant. 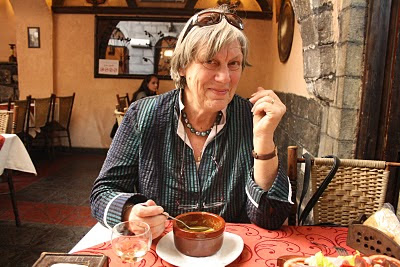 On day 3 we wenht to Palmyra, entering the Syrian Desert. We took some rest at Baghdad Café. This is also the road between the Mediterranean and Irak. 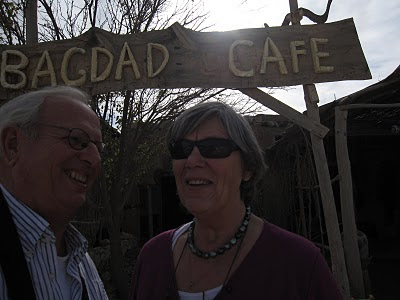 Day 4 we continued the trip to the world of Crusaders and their mediaeval opponents. In the most beautiful hall in the Krak des Chevaliers Paule was illuminated by fina rays of light. 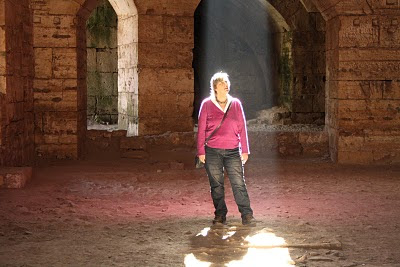 Day 5 was for Aleppo. We visited first a large number of Christian churches, all somewhat different: Marronites from libanon, Greek-Orthodox, Syrian Orthodox, Armenian, Evangelical, Chaldaean. We will not elaborate about these differences, but found it quite spectacular to find so many large communities in the major cities of Syria, as well as in some small towns in the Anti-Libanon mountains where the monasteries are built high in the mountains. 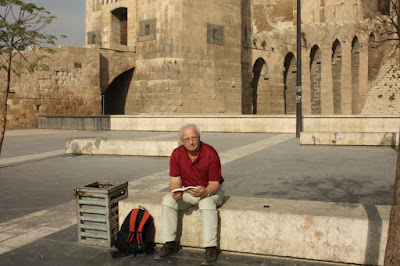 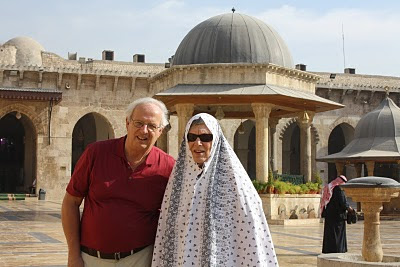 On day 6 we visited the site of the pillar of the Saint Simeon who managed to live there for some 40 years. It was surrounded by 4 cathedrals, now nice ruins. The second part of the day was for Maraat Nu'man where we enjoyed a kebab and the street scenery before we visited the wonderful museum of Roman and Christian mosaics. Paule loved the company of the high school youth of Idlib, a town nearby. 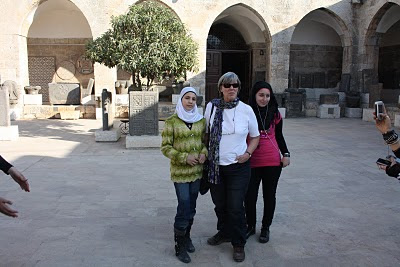 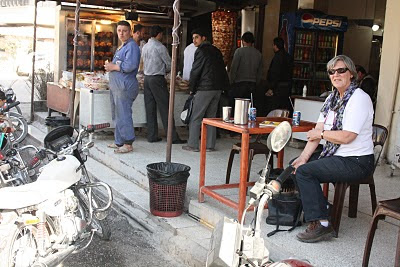 That night we stayed in Hama, Bait al Mashriq or Orient House, a nice hotel in traditional style, full with ornaments. It was not as beautiful as the nbice hotel Bayt Zamaria of Aleppo, but both were in that nice yellow ´Jerusalem stone´. Day 7 was first for Seydnaya, at 1700 metre high a small town with 23 churches, one mosque and a great monastery devoted to saint Thecla. According to the legend she was a virgin in the year 250 or so, attacked by a Roman officer. But then the mountain above the place showed a rift where Thecla could hide and save her virginity and faith. Now it is a place of pilgrimage for Christians and Muslims alike. We see here Paule amongst the pilgrims and Karel in the rift, imitating the old Roman officer. 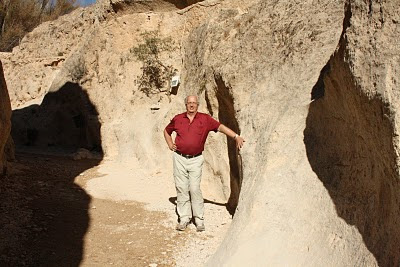 Day 8 was again in Damascus, where we visited the National Museum but also the Qasr al Azemi, the palace of the Ottoman governor. 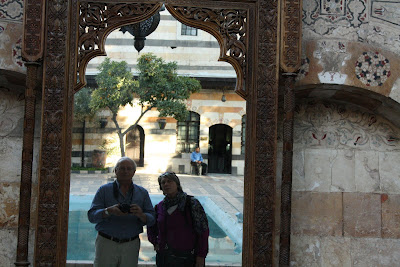 On day 9, extra time in Damascus we first made the pilgrimage to the tomb of Ibn al Arabi, the great mystic who lived at the same time as Meister Eckhart. It is a modest but lovely place, uphill Damascus.
Much more spectacular even was the tomb of Saida Zaynab, a huge Shi'ite sanctuary in the southern suburbs of Damascus, full with emotions, gold, blue tiles and crying people. Like in the Ummayad mosque (with the head of Hussayn) and at Ruqaya's tomb, and seeing Shi'ite people moving, walking, singing and hurting themselves in Damascus, here we realized how emotional and democratic Shi'ite devotion is. 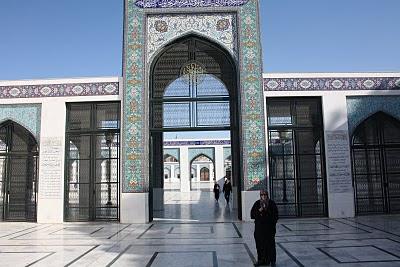 Day 10 was devoted to a short visit to the great University (quite disappointing), the Sinan mosque (used to be the Army Museum, but quite nice) and the return back to Holland.
Gepost door Karel Steenbrink op 00:07 Geen opmerkingen: