On 13 October 2011 a meeting was organised in Brussels by the Polish Presidency of the European Community, COMECE (the office of the European Bishops at the EU) and the Indonesian Embassy. Major guests was a small delegation of three guests from Indonesia: Prof. Atho Mudzhar, between 2002-2010 Head of the Research and Development Section of the Ministry of Religion, now teaching the UIN, Universitas Islam Negeri Syarif Hidyataullah of Jakarta (where he shares a room with our old friend Husni Rahim). Second was Prof. Margaretha Hendriks, former president of the Synod of the Moluccan Protestant Church and now Dean of Theology at the Christian University in Ambon. Third was Dr. Toni Wanggai, Nahdlatul Ulama head in Papua and also rector of the Papua Branch of the UIN Jakarta. 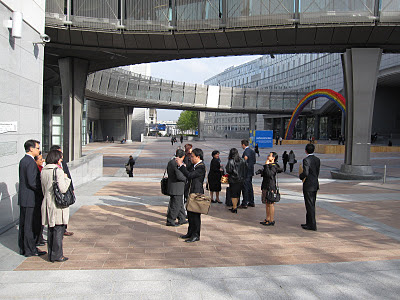 Topic of the discussion was the Freedom of Religion as enshrined in the Indonesian Constitution. I was invited to give a first talk of some 30 minutes. I stressed that religion or belief in God is mentioned twice in the 1945 Constitution. First it is mentioned in the preamble where (belief in) the Unique Supreme Deity (Ketuhanan yang Maha Esa is mentioned as one of the five pillar or Pancasila of the Indonesian nation. We must understand this formula as a rejection of Islam or sharia: no Islamic State but also no secular state. Instead, Indonesia considers religion/spirituality, personal belief in God as a positive aspect of society, without binding this to one concrete religion. Further, in article 29 individual freedom of religion and faith is firmly guaranteed. In its implementation these principles were still quite broad in the Soekarno period (1945-65) when Pancasila was even considered as compatible with Communism. But after 1965 religions, especially the 'big five' have gained more status and it has become more or less necessary for Indonesians to formally become member of one of these five religions. No marriage is possible without this and even no identity card can be obtained in practice. Various implementations of freedom of religion can be discussed as recent issues. I mentioned the 2003 Law of Education where it is stipulated that children must receive religious education according to their (and their parents') religion. The Catholics have finally accepted this rule as in line with the religious tolerance as [preached by Vatican II and here I quote Prof. Magnis Suseno who publicly defended this position. More problems are related to the two decrees of 2006 where at the level of provinces and districts Committees for Religious Harmony or FKUB (Forum Kerukunan Ummat Beragama) are instituted which have authority in permits for religious buildings. The definition of religious buildings is quite complicated. I quote my text: The FKUB must issue permits for the construction of new places of worship with the condition that at least 60 adherents in a village or district of a city must support this house of worship. The village head must warrant this number of 60 adherents. Also a recommendation of FKUB at district level must be issued for each new place of worship. In the subsequent debate it was emphasised that Protestants with their large number of different denominations were in a difficult position as well as other minority religions, because a majority could obstruct the opening of new places of worship. Besides, the definition of houses of worship is not clear. Many Catholics come together in small groups in private houses to pray the rosary, to have meetings of Basic Ecclesial Communities, for choir rehearsals or just to prepare for Sunday Mass: are such meetings to be considered as worship and so the garage of a private house to be seen as an illegal house of worship? Militant Muslim groups, especially FPI, Forum Pembela Islam or the Muslim Defence Front, have set private houses on fire in Jakarta and West Java with these accusations. 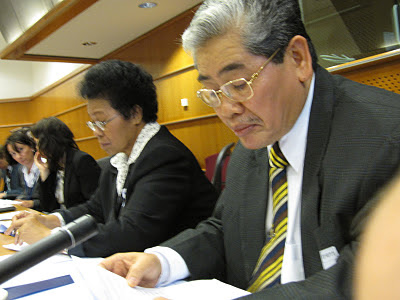 In her reaction Mrs. Hendriks emphasized the problem of the many Protestant denominations that she finds `annoying` also in her region because so many different churches are now under construction. Atho Mudzhar explained that there are two terminologies: rumah ibadah of Houses of Worship for the larger buildings that need officials permits (mosques, churches), while the smaller ones tempat ibadah or places of worship (musalla, kapela) do not need special permits, because they are only used by one family or just a small neighbourhood. Two suggestions for control of interreligious conflicts were suggested: the most important is a clean and effective police force, free from corruption and really intended to protect citizens. This was discussed related to the attacks on members of the Ahmadiyya movement who until 2008 could live quite peacefully during more than seven decades in West-Java but then were attacked by 'Muslim' gangs. Another suggestion was a decrease in the importance of religion in general: The public role of religion increased dramatically in the New Order period after 1965. Here also the possibility of inter-religious conflicts arose, especially in the turbulent era preceding the fall of President Suharto continuing during the first decade after his resignation. Dr. Mujiburrahman, a lecturer at the State Academy of Islamic Studies in Banjarmasin, wrote a doctoral dissertation on this process at Utrecht University under the title Feeling Threatened. He analyzed the fear of Muslims towards Kristenisasi, loosing Muslim dominated territories to growing numbers of Christians, while the Christian minority fears that they will lose freedom to express their religion in regular churches, and that they will have to dress and live in an Muslim way as in a quasi Muslim state. 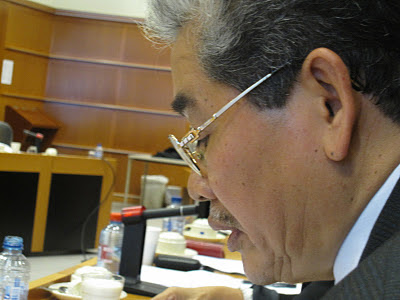 In 1996 the Catholic priest, architect, novelist and social activist Y.B. Mangunwijaya made an odd statement about the condition of his country. In his opinion there is ‘too much religion in Indonesia’. Beginning with his own Catholic Church, he complained that it is much too concentrated on its internal affairs, on its own community and also on its position in society. Here we may think about the slogan of Ignatius Kasimo, founder of the Catholic Party who always stressed that the Catholic Party was not founded to support and strengthen the condition of the Catholics alone, but for the bonum commune, the common prosperity of the whole nation. Many observers, both Muslims like members of the Liberal Network, Jaringan Islam Liberal as well as non-Muslims feel that during the last decade sometimes a narrower interpretation of the broad and inspiring formula of the 1945 Constitution has gain political backing. I am struck how the view of JIL is parallel to that of Soekarno. These Muslim liberals state that creed and cult belong to the private sphere, the concern of individuals only where the State must not interfere, while religion's ethical and civilising role belongs to the public sphere in open debate. Soekarno wrote letters from exile in Ende, Flores, back in the 1930s stating precisely this. Sure, Sukarno was "instrumentalising" Islam; but his "theology" is interesting too. And We should consider Soekarno as the main interpreter of Pancasila and the 1945 Constitution. In the 1980s, while I was teaching at the State Institute of Islamic Studies Syarif Hidayatullah in Jakarta, my rector, Prof. Harun Nasution wrote a quite challenging small book on ‘Reason and Revelation in Islam’. He analysed the question ‘Are all aspects of life and all knowledge to be found in the Qur’an?’ Nasution stated bluntly that the Qur’an does not provide us with a clear system for political and economic life. Again and again the Qur’an repeats sentences like ‘there is in nature a sign for people who reflect’ (la ayat li kaumin yatafakkarūn, Q. 16:69; also 42:12-13). There is a modest role for religion in worship, in ethics, but in many fields human beings have to find their own way. We should respect but not exaggerate the role of religions. Even more: we should not be blind to the negative side that is also included in the practice of religion. 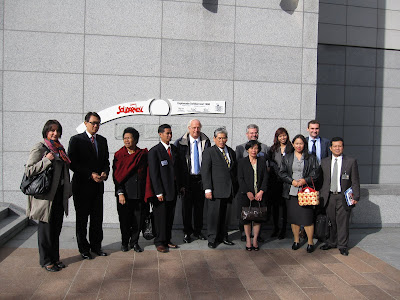 At the end of the formal exchange of ideas (which lasted from 9/11.30AM) the issue of Blasphemy Laws was discussed. Apparently there had been some debate about the Law of 1965 again last summer, but we did not really go deep into this issue under this label. After the formal session there was a lunch between 12.30-14.30, in fact a second more informal session where more personal exchange was possible. This is a very nice protocol in the diplomatic life of Brussels. After the meeting I asked myself about the real meaning of such event. The three Indonesians had arrived on Wednesday 12, but left one day before. They were planning to return on the 15th. Just for a meeting of some 5-6 hours. The ambassador stressed that Europe is important for Indonesia: to have bigger export quota, to remove Indonesia from a black list as an attachment to the Schengen agreement. In the discussions it became clear that Freedom of Rewligion is only part of a large social process an d that it should not be discussed too isolated. Anyhow, for me it was a special experience, not talking with academics, but in a political environment; not about the processes of the past that created the present, but to talk with politicians about what is good for the next future.
Gepost door Karel Steenbrink op 04:45 1 opmerking:

From Fragmenta Islamic to a true History of Indonesian Islam?

According to my memory Ben Boland once wrote that there is no big theory, even not e true general history of Islam in Indonesia, written by a Dutch scholar. Commenting on a book by G.F. Pijper he once wrote that the only result we have to present the scholarly community is Fragmenta Islamic. I could not find the original place of the quote, but I several though about this remark when reading a very important new book by Michael Laffan, The Makings of Indonesian Islam: Orientalism and the Narration of a Sufi Past (Princeton University Press, 2011, 301 pages).

The book wants to give two broad histories: 1) a history of Indonesian Islam according to the many written sources consulted by Laffan; 2) a history and critique of Western studies of Indonesian Islam. the book is not about independent Indonesia and not about Indonesian scholars (no Taufiq Abdullah, Deliar Noet, Alfian). It ends with the Dutch scholars of the 1930s, G.F. Pijper and Schrieke. It only has a few remarks about Clifford Geertz, not much about Anthony Johns and Merle Ricklefs who both in a very different way supported the thesis of a mystic character of the Islamic past of Indonesia. It is not a book for the beginning student of Islam in Indonesia. It is a long essay on many scholars, officials, missionaries who wrote about Islam and, of course, writes at length about the towering figure of Snouck Hurgronje. I have to admit that I found it very difficult to read: it is a very ideological or abstract theoretical discussion of rather down to earth and sober writing Dutch scholars who did not like too much theoretical discourse. Therefore it seems quite often very generalizing. From time to time, however, he has keen information about concrete facts as well. On p. 69 he criticizes a passage in my Dutch Colonialism and Indonesian Islam, p. 33/34 where I suggest that the Malay text of Book of Thousand Questions was not directly known to Van Eck and his informants in the archipelago.
Gepost door Karel Steenbrink op 03:02 Geen opmerkingen: