We stayed from 20-26 August 2009 in Minahasa and then moved to Ambon, until 2 September. It is quite a change between Minahasa and Ambon. Minahasa survived the economic crisis of 1997 quite well (thanks to agricultural export products, mostly coffe and cloves). It remained free from the inter-religious strife of 1999-2004. Moreover, although in both areas Catholics are small in number, about 5%, in Minahasa it is mostly original Minahasa people, while in Ambon most Catholics are from Kei, Tanimbar or Java and Flores. Another important difference is the strong Muslim presence in Ambon (about 50%) and the remnants of the civil war between 1999-2004 that left a strong impact on Ambon society.
Our arrival at Ambon airport was quite symbolic. We were welcomed by Prof. Dr. Saleh Putuhena, a retired professor at the UIN, the State Islamic University of Makassar. Saleh Putuhena had written a dissertation on the haj by Indonesians in the colonial period under my (and Taufiq Abdullah's) supervision. Nowadays Putuhena is quite active in interfaith relations in Ambon, because he is original from Ambon. Later on our trip we met Putuhena again in Makassar, where we had to wait for our connecting flight to Papua and where he took us to the beach to see sunset and wait for the breaking of fasting that day (see picture below). 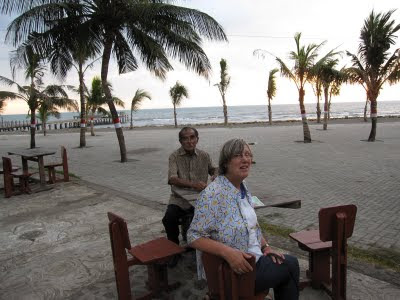 Putuhena brought us to the MSC house in Batu Gantung, until 1999 a mixed Muslim-Christian district of Ambon, but now 'cleansed' and turned into a fully Christian district, like all districts of Ambon now are either Christian or Muslim. The civil war has ended, but reconciliation is still a long way to go and relations have become more difficult that they were before the war.
We were welcomed in the MSC house by 93 year old bishop Andreas Sol, by the parish priest Wim Zomer (who came much later) and by MSC regional superior Arkadius Setitit. In the main room, as well as in our bedroom there was a welcome text that I show below. 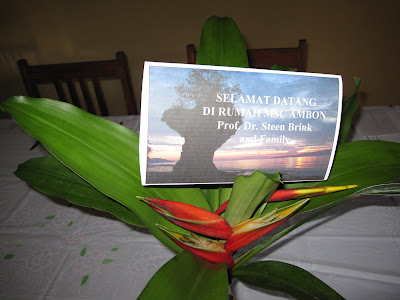 Bishop Andreas Sol always has been much interested in the history of mission. This was not always without missionary goals. In the 1990s he dreamed of proofs that could testify that already in 600 an establishment of Nestorian Christian had a church in Baros, West-Sumatra. He planned already a celebration of 1400 years of Christianity in Indonesia for the year 2000. This was important, because in this case the Christians would have arrived before the birth of Islam and were then longer in Indonesia than Islam. Unfortunately for Sol, the evidence given in the 1973-4 edition of the great History of the Catholic Church in Indonesia was not solid and the idea had to be dropped. 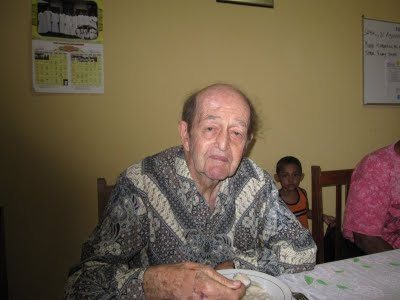 Although Catholics are only a small part of the population of Ambon, and although they know that further growth is not really possible, also this group has not really given up the idea that it is necessary to strive for bigger and more: not only an impossible, but also a threatening dream as I have exposed below. This is as threatening as the illusion of an Islamic State. Both dreams are not innocent, but from time to time really dangerous.
Ambon is an island for fish: seldom we have eaten so much and delicious fresh fish as in Ambon. We had it already in the first evening, when we took dinner after breaking the fast together with Putuhena and Abidin Wakano, director of the Interfidei office of Ambon. Later he would invite me for a talk preceding the breaking of the fast and where some 80 young people, both Christian and Muslim, were present. On the photograph below (not taken by myself, but from the Internet) Abidin Wakano is sitting left. 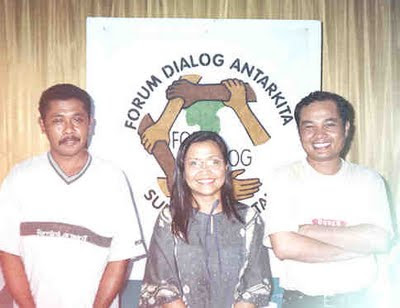 The next morning we had a long meeting with staff of the theological faculty of the Protestant UKIM university. Their campus was twice burned down during the Moluccan Wars, the first time when Dr. Mesakh Tapilatu was in Utrecht for the conference preparing the 'thick book', A History of Christianity in Indonesia, published by Brill, Leiden in 2008. They are now working in hired buildings, while the campus is being rebuilt again. Mesakh Tapilatu showed as the old campus, under reconstruction, but where the remnants of his former house still can be seen. 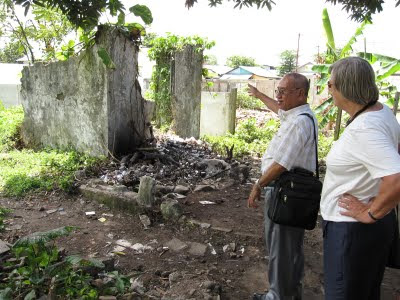