Only a small percentage of the ca 2% Indonesian citizens of Chinese offspring opted for Islam as a religious identity. Some say that it is only 1% of this considerable minority: from 240 million some 2% or 5 million are more or less Chinese. And so some 50.000-100.000 are Muslim.
They have a long history: some prominent Muslims of the 1930s until 1980s are Abdulkarim Oey (for whom Hamka wrote his Tasauf Moderen in 1937. The richest was definitely Haji Masagung who received so many orders from the Ministry of Religion, but besides confessing Islam also practised aspects of Javanese folk religion. He had a wonderful collection of daggers (keris) and used to clean these themselves and gave the water of the cleansing as medicine. The most active preacher was Yunus Yahya, long time leader of PITI, Persatuan Islam Tionghoa Indonesia. 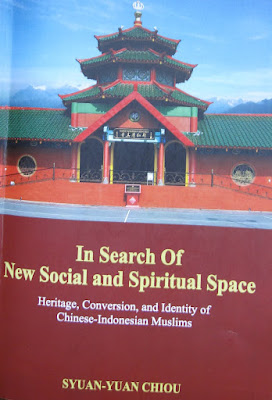 On Friday 23 February Syuan-Yuan Chiou from Taiwan defended his dissertation in Utrecht in this topic. Like so many modern dissertations it was written as a series of articles and this was relevantg in this case, because the growing self-confidence of Chinese converts to Islam is not one great movements, but can be seen in many different aspects. There are some (five are described) mosques in Chinese style. The most spectacular is the new Zeng-He mosque of Surabaya. On the cover we see this recent building with a background of mountains, clouds or even snow. When we look to the black and white picture of p. 115 we see that this cover is the result of photo-shopping or alterations! 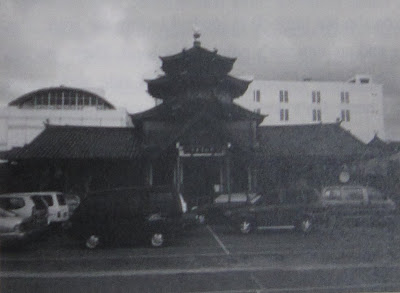 The black and white photograph belowe shows the real condition of the modest mosque (10x20 m) that is a quite impressive manifestations of the combination of Chineseness and Islam in Surabaya. There is no similar mosque in Jakarta, but some others are in Palembang, Bogor, Salatiga and Pandaan (East Java).
Chiou start his dissertation with the debate on Zeng He as Muslim admiral who travelled to the region in the period 1400-1430. The follows the practice of Salat Imlek, a short ritual prayer at Chinese New Year. It was allowed by a fatwa of the MUI, Majelis Ulama Indonesia of Yogyakarta in 2002. He has analysis of some 79 interviews and 56 conversion stories: not surprising most opt for Islam because of marriage/love affairs. He elaborates on some famous preachers who are popular among non-Chinese population. One group even sings nasheed in a Lampion (Chinese lanterns) style.

Most Chinese Muslims are from trading families and they are not religious specialists, but still earn money through trade. This could have been a good occasion to develop the theory of relation of Indoensian Islam and trade versus religious specialists: were it the Brahmans or ksatriya or rather the vaisya who brought Hinduism to Indonesia? What about the internal developments here? The theoretical sections now like to quote Pierre Bourdieu or theories about the rise of Islam in Western Europe: there must be theoretical analysis in a dissertation (or any academic book), but I like the theory to be close to the reality and not taken from absolutely different background!
You may download the dissertation soon through the programme http://igitur-archive.library.uu.nl/dissertations/2012..  Here Utrecht University makes available all its dissertations. 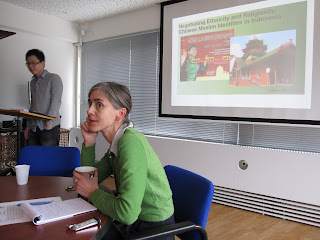 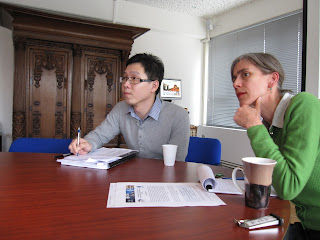 Just a few days before this Utrecht dissertation there was a lecture in Leiden by Wai-Weng Hew from Malaysia. He studied a similar subject and defended his thesis at ANU in Canberra in 2011. In Leiden he presented some of his results: about the mosques, the preachers and the Imlek Prayers. His work has not yet been published. I have some photographs of him, as shown above, besides Marieke Bloemberg who was the chair at the Leiden event. 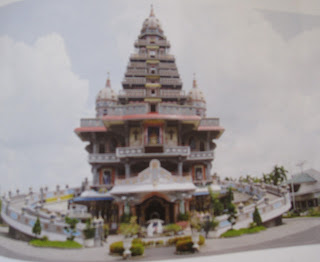 In our European country of the Netherlands it is uite suspect to talk about miracles. People easily use terminology like charlatanism and suggest that we use healthy science or go to well educated medical doctors instead of believing supernatural theories. But in modern Indonesia miracles are nearly affairs. In my present research on the history of Catholics in Indonesia,  I meet them nearly every day. One of these is a Dutch born lay brother of the SSCC order, Jan Heuts, a qualified carpenter. He orked since the 1970s in the island of Bangka and developed paranormal gifts, searching for water and providing alternative health care. No he is called Yanuarius Husada (after the Sanskrit word for medicine or Husada and is still practising his medical service for many people in Indonesia.
Another member of the SSCC order was the priest Rolf Reichenbach, of German origin, who worked in the diocese of Pangkalpinang for a long time and became a charismatic preacher and healer.
One of the best known Catholic healers is the diocesan priest from Tanimbar, Yosep Somar. He is described by anthropologist Paskalis Laksono in his book on Kei culture from a meeting in 1989. I wrote about him to John Prior and received this answer:
I met Somar many years ago. He was employed (among so many others) by Ibu Tien at the Presidential palace. I jokingly said that he has sinned against the Holy Spirit by restoring her health and not putting a knife into her husband! Yes, he was well known as a para-normal healer (using photos etc.). 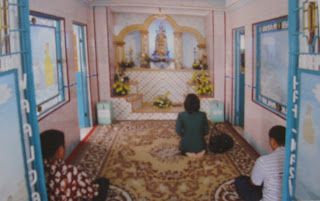 But one of the most astonishing stories is about a Jesuit priests from India, James Bharataputra. Born in 1937 he came to Medan in 1972 to serve the small community of Tamil Catholics in this region (already mentioned in vol. I:30, 59, 64-5; also vol II, 333). He started to build a grandiose church in 2000. He had Tamil and Chinese sponsors in various places of Indonesia and abroad. One day he had Rp 10 million  in his room, hile staying in a friend's house (about € 1000). He had to go to Jakarta and hile travelling the room was set in fire. Everything was lost, but only the mopney was found intact among the rubble. This became known and people asked for this miraculous money and gave him more until he received much money from all kind of donators and in 2004 his Indonesian replica of the Indian place of pilgrimage Graha Maria Annai Velangkanni was finished.
The photographs here are taken from an interesting article in the academic journal Archipel (no 82, 2011) by Daniel Perret. I could not make the quality better, but in the original journal they are perfect! 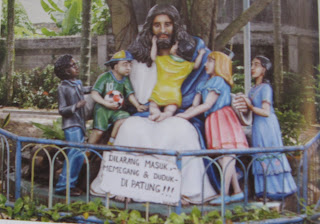 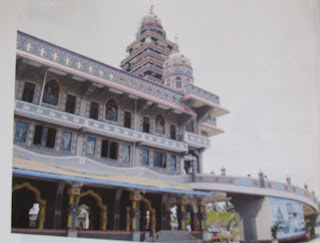 So, what about miracles? In Indonesia quite a few people are still fond of spectacular stories and events, while we dream sometimes also of similar stories.