HAMKA, the Japanese occupation and fight against the Dutch in Qur'an 2:243 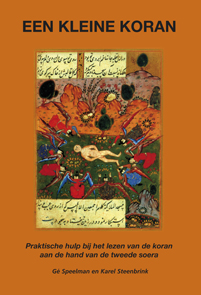 In June this year I published a book together with Gé Speelman, a colleague at the Kampen School of Theology. In the academic year 209-2010 I gave a course on intercultural theology in Kampen (replacement for Volker Kuester). Speelman suggested that we write a book on reasfing the Qur'an. She wrote the introduction, while I contributed a commentary on sura 2, Al Baqara, under the titel Een Kleine Koran (a Little Qur'an). I had given courses for HOVO, lectures for retired or 'senior' people. This autumn I resumed these courses in Tilburg and Doetinchem.
While working on the last section I read different interpretation of Qur'an 2:243:
Are you not aware of those who forsook their homeland in their thousands for fear of death, whereupon God said to them: 'Die' and later brought them back to life?
Who are these people? Paret here follows the 'Jewish' interpretation of Speyer and sees a reference to Ezechiel 37 in reference to the Jews who went in exile around 550 BCE.
Muhammad Asad follows here Abduh who rejects any effort to identify the historicity of the people: 'the commentators are most contradictory'.  Sayyid Qutb referes to his earlier references of the Children of Israel and has a vague indication that 'some Muslim generations will be going through situations similar to those experienced by the Israelites'. Was he referring to the Meccans who he to flee to Medina? There is no outspoken reference to Palestians here, although I expected this to find here.

A quite different interpretation is given by HAMKA in his Tafsir al Azhar.
My translation follows here:
We have experienced the time of change, especially the trabsition of the fall of the government of the Dutch-Indies and the arrival of the Japanese army can be read here in this verse. We have seen ourselves, at the time of the fall of Singapore, that the spirit of the Dutch army collapsed and the Dutch who were always so arrogant in our country of Indonesia and who considered themselves as the owners of the land and who hated to true owners of this cuntry, lost their confidence and they delivered their arms without defending themselves. At the moment thousands of people fled their houses and villages and in rows they fled for fear of death. First of all it were the Dutch citizens and the army of the Dutch Indies, but also the original population followed for fear of death. They came out of their houses, not to fight and defend themselves, but fled to save their lives. At that time we heard for the first time the word evacuation, a word that we write as epakuasi in the meaning of flee or run away! [...] The Japanese army entered and the Dutch flag was no longer hoisted, because their power had gone, and instead the Japanese flag was hoisted. The Dutch Governor General was no longer in his palace bu in prison. No power was given to Saiko Sikikan, the highest Japanese authority .. We introduce here this comparison, because many of our readers experienced this period and are themselves witness of it. So, they can easier understand out interpretation of this verse.
The Dutch government collapsed after it was allowed to live by God during 350 years. After the death of the governments of the Indonesian tribes there was the rise of the Dutch power.
In this style HAMKA continues his interpretationfrom page 338 until343! During a long period the Indonesian kingdoms or sultanates were dead, only living somewhat in the memory of the people (namun mereka terus hidup dalam kenangan). After the fall of the Japanese, the Dutch tried to return, but then there was a Holy War, Sabilillah and it was a personal duty for all Indonesians to join fughting the Dutch , Maka sepakat ahli Fiqhi menyatakan bahwa apabila musuh telah masuk kedalam negeri orang Islam, menjadi fardhu-'ain-lah berperang pada waktu itu.
Gepost door Karel Steenbrink op 01:16 Geen opmerkingen:

Pilgrimage and the political/economic aspects of religion

Snouck Hurgronje wrote in 1880 a dissertation on the Muslim pilgrimage of Mecca, the hajj. He constructed the theory that the hajj is one of the main four signs of the compromise between the Meccan Prophet and the Medina Politician. In Medina Muhammad could really see his community grow, but in order to win over the elite of Mecca 'the prophet had to make some compromises with the politician'. The major one for Snouck is the greater and modified role of Abraham as the first Muslim and the first Meccan prophet. Additional there was the change in direction of prayer (instead of the Jewish-Christian direction of Jerusalem), the qiblah, the move towards Ramadan as the month of fasting (instead of the Jewish 10th of Shura?) and finally the inclusion of the Meccan pilgrimage into the new religion of Islam. So, it were political reason, besides a reformed religious motivation, that put the hajj in Islam.
The hajj has been always of great political and economic importance in Islam. The Dutch Three Sisters (steamer companies) earned much money with this religious devotion. In 2006 Said Agil Munawar (minister of religion of Indonesia between 2001-4) was sent to jail because of embezzlement, among others with the money involved in the organization of the Meccan pilgrimage.
Recently also among Christians in Indonesia pilgrimage has become popular and important. It started with the Catholics and their tours to Europe: Rome, Lourdes, Fatima, Medjugorje, besides Paris and Amsterdam are popular destinations. Protestants prefer Palestine and the modern territory of Israel to visit 'their' holy land.
Fredrik Doeka, in September 2011 doctor in Utrecht on a dissertation about the man who never came to Israel, Moses, wrote a typical protestant article, doubting whether there is real 'holy land': no places of pilgrimage are without debate and the trip itself is often subject of corruption, entertainment rather than devotion. Read his spicy article in Sinar Harapan: 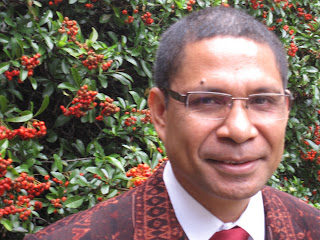 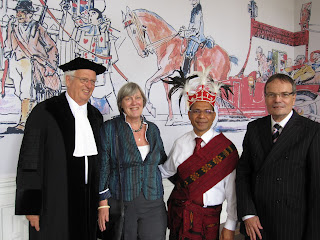 I was born in a Catholic family with a mother who loved all kind of pilgrimage: she did not like crowded services in big churches with complicated liturgies, but rather wanted to visit small places with statues of Mary, Joseph, Saint Anthony or other popular saints. She did not bother so much about all the business surrounding the pilgrimage: she like the souvernir shops of Lourdes with their booklets, statues and images. Also these people have to earn their money and pilgrimage may be a mixture of religion and business. This is not the style of our austern and serious young doctor from Kupang. Doeka reasd the Qur'an and Jewish scripture and concludes that it is not all praise for Jerusalem, but also strict defamations. Therefore Israel in general or Jerusalem more specifically is not per se a sacred place or holy land. Doeka also blames the modern business among Protestants: apparently the new president of the Synod of GMIT, the Timorese Evangelical Protestant Church, is quite active in the business of religious travelling. He initiated short after his election to his function, a trip of quite a few Protestant minister of Timor to the Holy Land. The journey is partly supported by one of the candidates to become mayor of Kupang: in order to secure his election this candidate has paid the ticket for a nice number of minister and their partners. In this way the pilgrimage has become business as usual again. Is this old or new tradition in Timor? For me, it is definitely an old mixture of religion and politics, of the serious and some entertainment. I wish all travellers a nice, profitable and pious trip!
Gepost door Karel Steenbrink op 01:41 Geen opmerkingen: