Ronald Korompis is a very successful business man, born and active in Manado, although now living in Jakarta. He is also a very active an devout Catholic. One of his enterprises is the project Bukit Doa or Mountain of Prayer, an area of 50 hectare, close to Tomohon and only at some 15 km distance from the capital Manado. On this mountain a monumental Way of the Cross with fourteen stations, magnificent bronze statues, a prayer hall, Marian grotto in Lourdes style, a retreat centre for some 150 guests, an amphitheatre for religious performances (but also for grand marriages: Minahasa people like great festivities!) are built. It is fully financed and very well kept by this benevolent devotee. I heard also quite a few Protestants express their admiration for this new religious facility in Minahasa. Especially the grave of Jesus is built in a very suggestive style. Devotees enter a very dark construction and after several curbings they turn towards the light and see the resurrected Christ with his mother in a grotto, after crossing a bridge over a small pond. 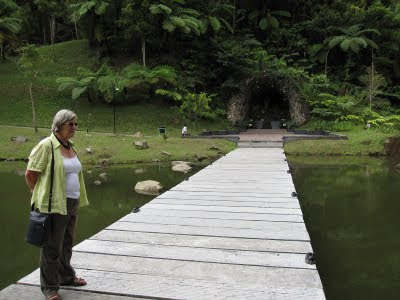 Another and even much larger establishment is SMU Santo Nikolaus, also called Lokon College, a boarding school, built close to Tomohon on a large piece of land at a height of 900 m, so quite cool in the mountainous region southwest of Manado. Some 450 pupils receive their education in this place, girls and boys, Christians and Muslims. In accordance to the small number of Catholics in Minahasa the majority of the Christians are Protestant and therefore Catholics are a minority in this school. The pupils are not only accepted from Minahasa, but from all East Indonesia. The first pictures I took here were from two Papua girls, originating from Timika. 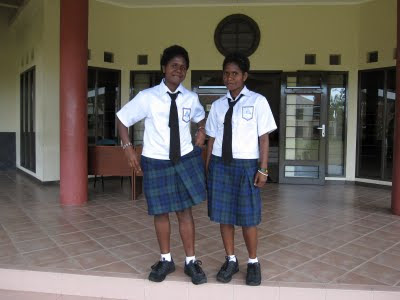 The name Nikolaus has been taken from bishop Nico Verhoeven MSC. The school has all facilities: many computers, excellent teachers, full boarding. Quality of the buildings is quite different from the usual boarding schools, seminaries and convents that we saw on this trip. This is really a new standard. Only about 40% of the parents are ably to pay the school fee. The others are receiving subsidies from the foundation. Dr. Yong Ohoitimur, a very energetic MSC priest, professor at the Major Seminary of Pineleng, also teaching at the Salesian University and the Protestant University, works here one day per week as secretary of the foundation that takes care for the daily management. His major assistant is a retired Chinese-Indonesian businessman from Jakarta (not Mr Korompis), who controls the financial administration. Because of the quality of the school and to honour this charity in the field of education, President Susilo Bambang Yudhoyono opened the institution in 2006. It is not a formal Catholic institution and definitely not under the diocesan responsibility, but there are many crosses and statues of Mary in this compound where many students walk around with their laptop, a picture that looks like the common scene at Utrecht University. I did not take enough pictures here and therefore only two images: of the SBY signature and the energetic Dr. Yong Ohoitimur MSC in front of one of the buildings. 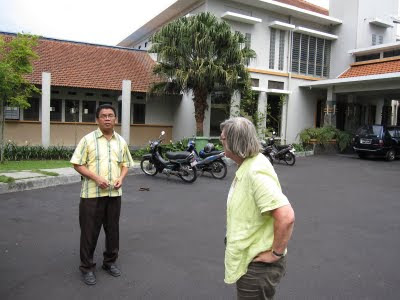 Just two concluding remarks for this section: the impressive network of primary and secondary schools, that was set up by the Catholics since the beginning of the 20th century is now still maintained, but the number of schools is in many regions reduced because of the availability of government schools all over the country. As to new educational initiatives, the academic level is more attractive for bishops and Catholic organisations in general. Also in Manado the Salesian University is one of the more prestigious initiatives by the Manado diocese. However, in East Indonesia with its many underpopulated regions, where secondary education is often not easily available at short distance and boarding schools are important (especially in the Moluccas and Papua) this initiative seems to be quite important, especially because the high quality in the Lokon Nikolaus College.
Religion always or at least in most circumstances needs a vehicle: politics, social action, or just simple possibilities for social interaction, education and medical care, beautiful architecture or music: they make good combinations with religion, intensify its effect and impact on humanity.
Gepost door Karel Steenbrink op 01:01