On 11 February 2018 a 'lonely wolf', a young man, born in Banyuwangi, attacked the church of Saint Lidwina in Bedog, near Yogyakarta. He had a sword and cut the heads of statues of Jesus and Mary. He hit also several people. His best know victim was the 80 years old musician and Jesuit priest, Dr. Karl-Edmund Prier who directed a choir or celebrated Mass on the early Sunday morning. Prier had severe wounds on his back and head, but was not deadly wounded. Tiny parts of his skull fell on the grounds, but nothing of his brains was hurt. He published a letter with some comments about the aftermath: not only the Catholic community but also the Muslims of this neighbourhood helped to clean things, to paint the church again white. The first to come with a new statue for Mary and Jesus was a Muslim haji who had bought it at his own initiative, without a panitia or committee. On Monday 19 February the church was 're-consecrated' by Bishop Robertus Rubiyatmoko of Semarang. 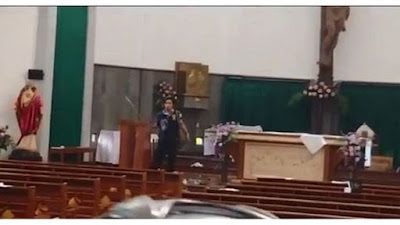 From President Jokowi of Indonesia also a comment came in the style of a 'Negative Confession'. In fact, it was a statement Jokowi gave already before he became President in 2014. It is in Indonesian also on the internet:

http://m.kompasiana.com/opajappy/merenungkan-ulang-islamnya-presiden-jokowi_592c04fbd57a61e7598b2d32
In the tradition of Muslim theology the confession of God is often formulated in a negative way: how God not should be seen: not changing, without begin and end, hearing but not as a human being or as any creature. The Arab expression is bi la kayf (without its how) and often summarized as balkafiyah. It is a modest way of speaking about God. I give here a translation of this formulation of Jokowi's personal confession:
Everybody has the right to doubt my religion.
But I, for myself , do not doubt my belief and my spiritual leaders.
And I never doubt Islam as my religion.
I am not a member of a group which adheres Islam with the purpose to create an Islamic state.
I am not an associate of those who accept Islam, but also like to spread hatred, envy and fear.
I am not an associate of those Muslim groups who are convinced that they must consider family members and other fellow citizens as unbelievers.
I am not a member of that small Muslim sect who disguise in Arab dress with a turban and who rob property of other people and use a sword full of blood.
I am not an associate of the Islam which abuses the verses of the Qur'an to cheat the people.
I am not a member of those political parties that abuse Islam for corruption in order to live a luxurious life.
I am not a meber of the Islam which causes war against Muslim fellow people.
I am not a member of the Islam  which oppresses other religions.
I am not an associate of Islam which is arrogant, with a sword in the hand and words in the mouth.
I am not a member of Islam in order to seek dirty tricks.
I am Jokowi, part of Islam as Rahmatan lil Alamin, God's Grace for the whole world.
The Islam which is lived from generation to generation and plays its role in the Indonesian Republic as a State which keeps to the Constitution of 1945 and the Bhinneka Tunggal Ika, a Unified Variety, as God's Grace.
Gepost door Karel Steenbrink op 21:53 Geen opmerkingen:

Mosque-Church of Pec on the cover of CMR vol. 9

In the monumental series, Christian-Muslim relations, a Bibliographical History the 17th century is described in four volumes of about 1000 pages each. Volume 9 is the last one (published after 10 and 11). It is on Western and Southern Europa: Spain and Portugal, France, Italy, Germany and Central Europe (mostly Hungary and Austria).
The cover of the book shows a nice image: it is of a mosque in Pec (Hungary), built in 1543 as a mosque, under the Ottoman administration. It was turned into a church when the Habsburgs took the place in 1686 but remained also used as a mosque until 1868 when only Christian worship was allowed.
I visited the place in 1995, when just south of Pec the wars in former Yugoslavia disturbed this region. At that time the history of religious change already was shown inside the church: in the left side, just in front of the altar, there was an Arabic calligraphy where the opening verses of the Qur'an, al-Fatiha were shown, on the right side the Latin text of the Christian creed. 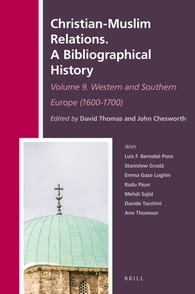 Now I saw also that the cross and the crescent are united on top of the dome of the building. nice choice!
The book as whole has many interesting entries. Jan Slomp  gives the most recent theories about the 'Gospel of Barnabas' which had possibly an Italian version before the better known Spanish. but still, it is seen as a work by a Morisco in polemic with Christianity. André du Ryer, an early translator of the Qur'an (1647)  has found his description, as well as Vincent de Stochove, adventurer, pilgrim to Jerusalem and one of the few people from Belgium in this series of studies. Levinus Warner is here put in the German section. He was born in Lippe, Germany and went to Leiden to study Arabic, Persian and some more eastern languages. He lived in Aleppo and Istanbul to buy manuscripts for Leiden university and died there too, while his collections is still the backbone of the Leiden collection of Arab Manuscripts. the book is a mix of people with admiration for the Muslim World, besides fervent polemicists. This book against proves the strength of the format for the whole project: attractive biographies, summaries of the content of books and finally good bibliographies.
Gepost door Karel Steenbrink op 11:46 Geen opmerkingen:

Genocide: from J.P. Coen to the Turks and the Armenians

During the last months there is quite a hot debate in the Netherlands about Jan Pieterszoon Coen, founder of Batavia/Jakarta in 1619. A primary school in Amsterdam, named after this Dutch-Indonesian 'ancestor' wants to change name, because Coen is also accused of Genocide, because of his order to kill the majority of the population of the island of Banda, some 2000 civilians, in 1621. The only reason was that Coen wanted to have a monoply in the trade of nutmeg, while the population wanted to sell to everybody who gave them a good or better price.
Also in his native town og Hoorn, quite a few civilians want to demolish his statue. 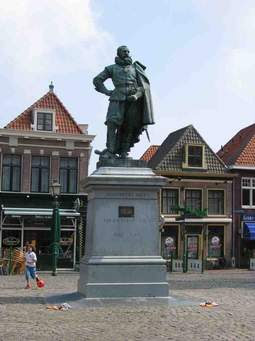 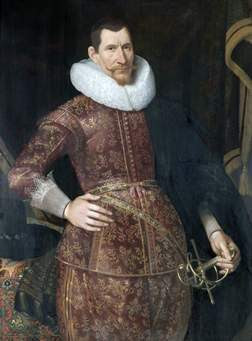 The action against the memory of Coen is part of a large act of confession of the Dutch nation. Most serious are the crimes because of slavery. Professor Piet Emmer, emeritus in colonial history of Leiden University made a claim that slaves in Surinam held by plantation owners got better food, clothes and housing than their family in Africa. True or not? Ewald van Vutg wrote a book Roofstaat or 'Nation of Robbers' accusing Dutch colonialism of all kind of dirty acts. Following this discussion the museum Mauritshuis in The Hague removed the statue of Prince Maurits to the basement.
In a new action of parliament there was a debate about the fate of the Armenians in 1915: they were considered as traitors and enemies by the Turkish government, forced to leave and about 1- million, perhaps many more died in this action to eradicate Armenians from turkey. Dutch parliament accepted the terminology of Genocide for this case, but did not debate the status of Jan Pieterszoon Coen: selective memories and judgments about the past! In fact in Dutch parliament there are now six MPs of Turkish-Dutch offspring. One voted against the label of genocide, five were in favour. In fact it was not only about the past but also about the position towards the present policies of President Recep Tayyib Erdogan.
In my interaction with Indonesians since my first visit to the country, for the pesantren PhD. research in 1970-1 I have often talked about the colonial past, but seldom with judgments about good or bad. We cannot change it any more and strong statements do not remove, remake or soothen the past. It will remain with us.
Gepost door Karel Steenbrink op 08:54 Geen opmerkingen: