The Popularity of M&M among Javanese Catholics 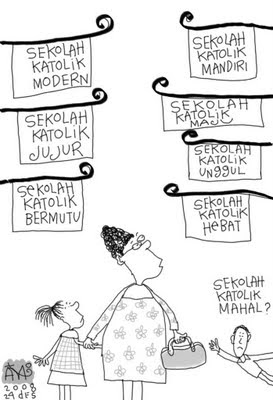 Not less than three new books on the early history of Catholicism in Central Java have appeared recently. Anton Haryono, Awal Mulanya adalah Muntilan. Misi Jesuit di Yogyakarta 1914-1940 (Yogyakarta: Kanisius 2009) stresses that the Catholic mission started from Muntilan around 1904, but also entered the major town of Yogyakarta since 1914. Schools first, then church buildings, the Onder de Bogen hospital, the seminary in Kota Baru, but most of all the huge crowds that came together at several meetings in the 1930s. Haryono wrote this book as a Master's Thesis at Gadjah Mada University in Yogyakarta. The context of the late colonial period has been more or less forgotten here. Not the rivalry with Protestants and Muslims (who also had their hospital and many schools), but only the single denomination of the Catholics has been portrayed here in a very sympathetic story. It has been written very close to the original reports and the style of Claverbond is present on all pages. Nice illustrations from the rich collection of Kanisius!

Dr. Gregorius Budi Subanar, Menari di Terra Incognita (Yogyakarta Kanisius 2009) is a curious book. It is written as a diary of a student who is involved in a research programme as well as his Master's Thesis on the native Jesuits of Central Java, 1915-1962. It has many transcripts of SNS messages to his fiancee and to fellow students, reports about technical details (should he write a paper thesis or rather make a documentary or even an e-report, only available as a weblog?). In fact the major representatives of the early Jesuits figure in this book. Soegijopranoto, but also F.X. Satiman, the shy and pious man who entered the Trappist monastery in 1940, the twin brothers Eugenius and William Csizmasia von Somogy who left the Jesuit order later in the Netherlands, the very gifted and artistic Michael Reksaatmadja who died too early. An internal conflict among the clergy is also depicted here: Petrus Sutopanitro was on duty in Batakland, where he showed much sympathy for the nationalist struggle, but was sent back to Java by Dutch priests and (neo-)colonial officials. This is a lively style of writing history. Of course very interesting for the inner circle of Catholic historians. Outsiders perhaps will feel somewhat estarnged because many small elements are not explained here. After all, it has the same style of self glorification, talking big and somewhat exaggerating the qualities of the own community. The last sentence of the book is (p. 282): Yes!!! We are the perfect generation. It is not explained, but may be understood in a false way.

The third book is by Iswanti, Jalan Emansipasi. Perempuan Katolik Pionir dari Mendut, 1908-1943, (Yogyakarta: Kanisius 2008). It is a thorough study of the boarding school for girls in Mendut, established by the Franciscan Sisters ´of Heythuizen´. This book can be seen as the even more outspoken feminist and more precise documented counterpart of the more lighthearted Dara/dara Mendut by the late Mangunwijaya.
The body of the book are 20 (self-)portraits by fermer pupils and students in the school (163-393). Besides, a survey of the rise of Catholicism in Central Java is given from the feminist perspective. The quite docile and humble Franciscan Sisters would have been very surprised to read that their activities in retrospect are seen as liberating and emancipating for women. But Iswanti gives strong arguments and illustratios for her thesis. The book has many nice photographs and also numerous illustrations by MSF (Holy Family) priest Romo Koko (if that is his true name!)
I include to other cartoons by this illustrator. 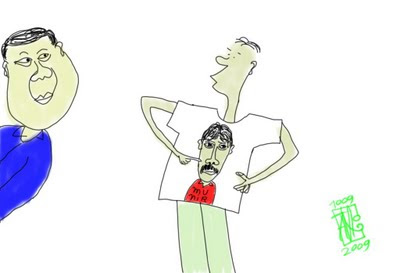 Muntilan and Mendut are popular places in the history of Javanese Catholicism. We now may forget that the glorious Father Van Lith was not on speaking term with his colleague in Mendut, Petrus Hoevenaars. Van Lith is praised as a friend of Lavanese culture, but what about his school that ended as a full Dutch-language school? The present perspective can be used in a way that puts history not always in its 'true' context. I is this writer too obsessed with the colonial heritage? The authors in this respect may learn from the attitude of Romokoko as a critical observer.
Gepost door Karel Steenbrink op 01:18 1 opmerking: