The Act of Killing: the Indonesian version of Hannah Ahrendt and the banality of evil.

Last week we saw the movie The Act of Killing in a theater in Utrecht. It was announced in newspapers, in the TH magazine as an exceptional piece of art, comic and serious at the same time. So it was. The movie plays in the Medan area, close to Lake Toba, among Batak people.  The background is sometimes a playground close to the waterfall where the river pours out of Lake Toba. So is the advertisament for the movie as below. 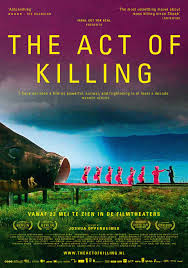 In this region Muslims and Christians count about the same number: there is no religious element in the movie and from many names it is also not clear whether the people are of either religion.
The movie concentrate on two people who are proud that they were among the killers of those terrible Communists. They like to illustrate the effective way of killing, so that not too many blood comes out of the bodies and the cleaning of the balcony on top of their shop (the place where the killings took place) is so difficult.
They were just the two small people: the victims were indicated by the army, but they had to do the dirty work.With some proud and pleasure they show again and again (somewhat too often!) how with simple instruments, a piece of wood and an iron thread, the killings could be executed. The imitate the fear of the victims, but then all of a sudden they change from laughter to anguish themselves and acknowledge that it is very difficult sometimes too sleep, because they cannot chase the images from their minds. 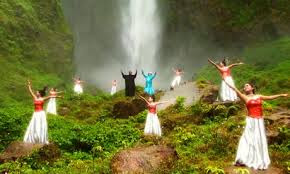 There is no running story and sometimes I wondered whether the movie was already at its end, because there were some repetitions. There were several shots of great demonstrations of the Pemuda Pancasila where also the killing of 1965-6 were praised and all enemies of Indonesian unity and integrity were declared as the big enemies (without identifying anyhow the Muslims as a threat for the unity of Indonesia).
One specific comin episode is the song, with the dance as shown above, where some of the victims of the killings praise and thank their killers, because they are now living as martyrs in heaven. 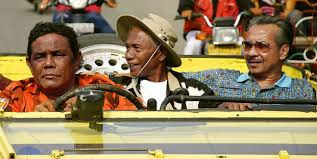 An American filmmaker, Joshua Oppenheimer did the interviews and people talk to him. It is quite astonishing to see how a prominent man as former Vice-President Yusuf Kalla and some generals, a former governor and other politicians defend the atrocities of Pemuda Pancasila and stimulate these people to start brutal acts, in this fact shown against Chinese shop keepers. It is a sad image also of modern Indonesia, ruled by corrupt military, that is shown here.

Recently I read several novels by Ayu Utami that mention the killings: in Larung it is first the Communists who start to act in a furious way, but then followed by the military and others. A military man is one of the key figures of the novel Manjali and Cakrabirawa and he was a severe accomplice in the killings. I also read a novel by Ahmad Tohari, Ronggeng Dukuh Paruk, (The Dancing Lady from my Village), in fact a trilogy published in the 1980s but re-written in a more open style after the abdication of Suharto as a description of the cruelty of the Communists but also of the killings after 30 September 1965. And, of coure the book by Tinuk Yampolski, Candik Ala, already mentioned in this blog earlier this year.

We are now also seeing the movia on Hannah Ahrendt who described the German killer Eichmann as a loser, a small bureaucrat, not as the ultimate evil, but somehow a mixture of naivity, simple-mindedness, the banality of evil.
Gepost door Karel Steenbrink op 04:00 Geen opmerkingen: