13. Sister Birgitta Renyaan, a smiling but stubborn ambassador for peace 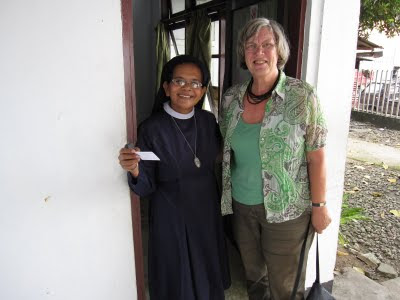 Sister Brigitta (born Brigittine, Langgur 7 October 1953) Renyaan is member of the extended clan of Langgur with many prominent members in the Catholic Church. Philippus Renyaan was a teacher in the period 1942/5 who in fact took over leadership of the Kei community and proved to be a good, devoted and pious manager. During the period of the Moluccan wars Mrs Paula Renyaan was the Vice-Governor.
Brigitta was in 1999-2003 a major figure in the women movement against violence and promoting inter-religious peace. She is one of the founders of Concerned Mothers, Ibu Peduli who started from 6 August 1999 on a whole series of activities against the continuing violence, in cooperation with Rev. Agus Rehewarin (Protestant ministers, from Kei but working in Ambon), the female minister Rev. Ece Tahapari and Catholic lay leader Mr. Sembiring.
Brigitta started the practice of making small pieces of textile with the sloganhentikan kekerasan dan pertikaian (see the picture below). 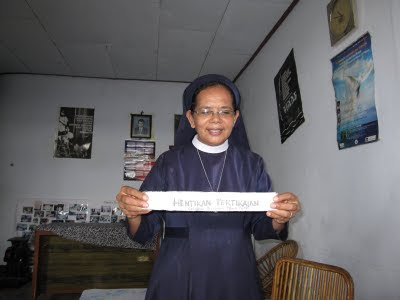 The true chronology of her peace activities will be described in the full book. For this moment it may be enough that she was, with Hendriks, wife of the UKIM Rector, the only women at the Malino peace talks.

In the early 2000s Brigitta worked in Ambon also together with Unesco. Between 2005-2008 she was invited by UNESCO to work for reconciliation and religious harmony in Aceh. Since several months she is now back in Ambon, but her she has established an NGO of her own and lives in a house attached to that place. There are some rumours, that she is not the submissive sister, waiting for command from her superior as is the habit of many other sisters. In this sense she is definitely another style of religious nun.
Gepost door Karel Steenbrink op 04:23