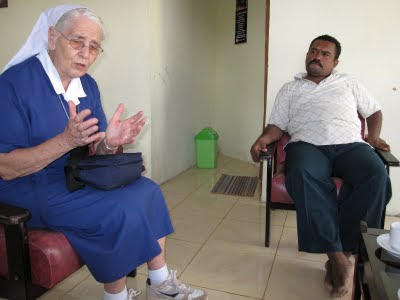 Rev. Abner Latue, born in the island of Seram, is a minister of the Gereja Protestan Maluku, the Moloccan Protestant Church and the major partner of sister Francesco Moens in the establishment of the refugee village Lembah Agro, described below. He likes to elaborate on the Protestant love for Israel. According to him the name Obed is not related to Robert (in the couple Obed-Acang/Hassan, a popular TV play about the conflict) but to the grandfather of David. Old Testament names are very popular in Ambon. The David star is often used in the liturgical dress.

Notwithstanding his staunch Protestant conviction, Abner Latue is also practicing the use of a special plate of offerings, the Piring Natsar in his house. I was allowed to see it and take a picture in his bedroom, where it was placed on a table, together with Bible and hymnbook. 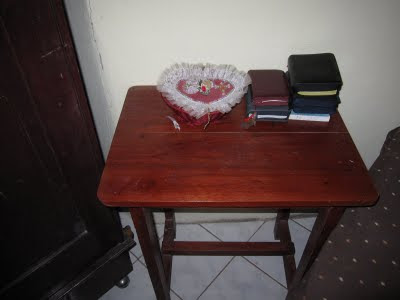 Latue knows that an earlier generation of missionaries held a firm stand against the piring natsar as a remnants of veneration of ancestors, but he saw it as a traditional way of praying and thanking God (the offering is given to the church after the wish is fulfilled).

In his idea of Islam, Latue is very outspoken and negative. Islam is a religion that wants to dominate the world, as is written in Genesis 16:12 about Ismael, the son of Hagar who was driven away together with his mother: He will be a wild donkey of a man; his hand will be against everyone and everyone's hand against him and he will live in hostility toward all his brothers.
In fact, the view of Francesco Moens about Muslims was not much different. They are seen as a permanent thread by Christians (who surely hope that the whole world will bow for Christ). The interreligious harmony is still a far away dream!
Gepost door Karel Steenbrink op 01:48