Pela as a tool for reconciliation in Ambon? About Jesus as a/the Moluccan Ancestor and 36 hours making a difference between Christians and Muslims 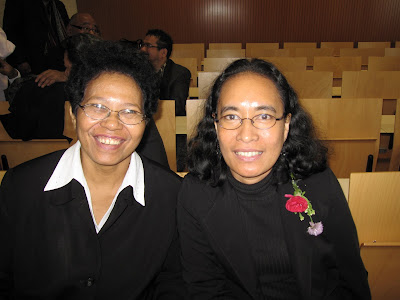 On 8 June there was, after a short seminar on the present state of Muslim-Christian relations in Indonesia, the public defence of the dissertation by Rachel Iwamony on The Reconciliatory Power of Pela in Ambon. Iwamony (here on the right with left Eta Hendriks of the theological faculty of UKIM in Ambon). Iwamony starts with the powerless ideal of pela during the Maluku Wars of 1999-2005. This pre-Islamic and pre-Christian tool for reconciliation did not function any longer for several reasons. Main reasons are the rejection of pela rituals and myth by orthodox Muslims and Christians (who do not like to accept the special authority of ancestors, rejects drinking of sopi and other practies that are considered as pagan. A second reason for the weak position of pela is the fact that it has not grown with Maluku society, especially in Ambon where so many migrants from other regions have arrived since the 1960s. They are not integrated in this system.
Iwamony proposes that Jesus bee considered as Tete Manis as the great ancestor of the Moluccans. I have some questions about the Jewish identity for Jesus and how to combine it with a Moluccan passport? What about John Kennedy who stated in Berlin Ich bin ein Berliner? In Islam Abraham is seen as a Muslim: theological adopted parents?
Besides this theology of the Tete Manis, she discusses the ritual of mixing blood that was done by the ancestors before they drank small quantities of each other's blood as a token of their peace treaty. This should be seen as the token of Jesus as the ancestor, the crucified “who sacrificed himself in order to stop estrangement and enmity in the life of Moluccans.” (p. 138) Iwamony has sometimes very hopeful formulations. p. 168 sounds very unrealistic to me: “The joy the Tete Manis, the Crucified Christ, gives to the Moluccans goes beyond religious boundaries. Therefore, the Christians and Muslims can share their joy at religious events and celebrations.”
In the two theological chapters no Muslims are quoted and there was nowhere a reference to the firm Muslim conviction that Jesus did not die on the cross but was rescued (eventually the body of someone else was replaced instead of Jesus, Judas, Simon of Cyrene and Pontius Pilate as candidates). The Qur'an talks of 'raised', a terminology that we also find in the Gospel of John 7:39 about the glorification and also in Ch 12-17 where the whole process of the final days of Jesus are described as 'The Hour has come for the Son of Man to be glorified.' For Muslims this has been realised directly from the cross acording to Qur'an 4:158 They did not slay him: nay, God exalted (rafa'ahu) him unto himself'. In the common Christian tradition this occurred 36 hours later: after the short stay in the grave.
It was quite disappointing to me to see that in this dissertation, written as a theological effort to bring harmony between Christians and Muslims, no attention was paid to the Muslim ideas about Jesus.
This short reflection is not meant to solve this problem: after 14 centuries the debate will certainly continue. I only hope that both partners take each other serious and I regret that this dissertation did not go into the Muslim ideas in this respect. 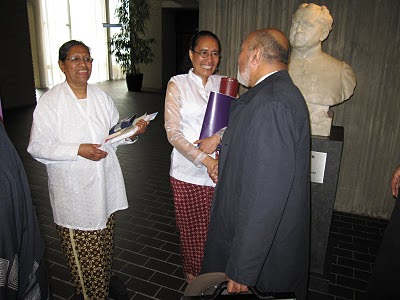 The last decade: some notes from an outsider about Muslim-Christian Relations in Indonesia 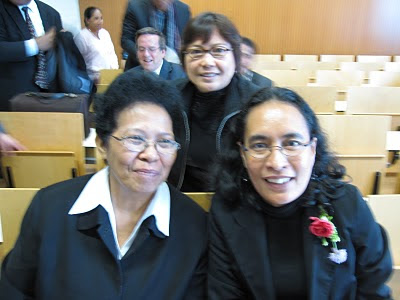 Left Dr. Margeretha Hendriks of the theological faculty of UKIM, right Rachel Iwamony and in the centre Kemerlien Ondang who is starting her own Ph.D. Research about the role of woman in the interreligious discourse in Indonesia.


This is the text of an introduction presented on 8 June 2010, at the occasion of the public defense of the thesis on Pela as a Reconciliatory Power at the Free University of Amsterdam, by Rachel Iwamony.

This short presentation will cover first some national debates, Jakarta-centered. Then I move to Makassar and finally to Manado.

In 2005 the young Indonesian Muslim Noorhaidi defended a doctoral dissertation in Utrecht on Laskar Jihad with a quite surprising conclusion: one of the main reasons for Jafar Umat Thalib to start the jihad as a training in Java and as an active force in the Moluccas was not the hatred towards Christians or fear for Christianization but the rivalry among various orthodox or salafi movements. Jafar Umar Thalib was a rather unimportant figure within the broad Wahhabi movement. He could gain prominence through the organization of the jihad. This is not the full explanation of the Moluccan wars: local troubles between villages and between religious denominations, national politics and also the international movement towards the strengthening of orthodoxy and the role of religion were important too. But this aspect of internal rivalry within Islam cannot be neglected. Gilles Kepel has interpreted the recent worldwide clash of religions as Fitnah, Guerre au Coeur de l’Islam or in the English translation of his book of 2004: The War for Muslim Minds. Not a clash between Islam and the (Christian) West, but basically an internal struggle within Islam with some very unpleasant effects for non-Muslims.

This is also the important trend in the 11 Fatwa issued by the MUI, Majelis Ulama Indonesia on 29 July 2005. There is a somewhat liberal trend in some decisions in this series of ethical decisions. International copyright is recognised and so property rights for computer programmes and international movies of the Western world. Social welfare is defined as a Muslim value too. But pluralism is rejected, as well as inter-religious prayers and inter-religious marriage. The MUI wants some kind of apartheid, separation of the religious communities, perhaps comparable to communalism in modern India.

In 2009 the last book by Abdurrahman Wahid and Syafii Ma’arif was published: Ilusi Negara Islam. This book depicts the idea of an Islamic State as a dangerous illusion, threatening the centuries-old tolerant Islam of Indonesia. The book, partly inspired and financed by a rich American adventurer C. Holland Taylor and his LibForAll Foundation, talks about the aggressive infiltration of agents of intolerant Wahhabi-style Islam in Indonesian mosques and religious schools, financed by foreign funds from the Middle East. However, it describes only a symptom of the internal struggle in the Muslim world itself, where the western and Christian ‘other’ is always present in the definition of the modern Muslim self, whether it is a open or closed personality.

We can see the same development in the modern legal debate in Indonesia. In the last decade there were at least three national cultural debates. In 2003 a new law on national education was introduced that virtually prevented dialogue: all children have to be educated along their own religious tradition. This means separation of children on a religious basis. In 2008 there was the debate about pornography, that had very vague definitions about the subject but threatens the pluriformity and variety of art, culture and local variations. Balinese dances and Papua traditional dress of the koteka or penis sheath are under discussion. In 2010 and so very recently, we have seen the approval of the blasphemy law by the Constitutional Court. The Muslim establishment uses the prohibitions against blasphemy, heresy, and deviance to persecute religious minorities and unorthodox sects. It is another step in the internal debate of the Muslim community to restrict pluralism and promote strict orthodoxy.

And on the Christian side? We see similar developments, but with some distinctive characteristics. Also on the Christian side religion receives much more attention. But here the tendency is towards many different organizations. The vast metropolis of Jakarta alone counts more than 300 different denominations. Some evangelical and charismatic movements are happy with hiring place in hotels or public meeting halls. Others want a church building of their own as an expression of their identity. Mujiburrahman, a lecturer at the Banjarmasin Institute of Islamic Studies wrote a doctoral dissertation under the title Feeling Threatened. Muslims are afraid that they will lose members to Kristenisasi, Christian mission. But Christians are afraid that they will lose individual freedom of religion. Christians and Muslims play a game in the same field, but with different goals and rules.

In the period 1945-50 the Grote Oost or the Great East State was one of the four states of what the Dutch planned as the United States of Indonesia with Makassar as the eastern capital. Besides Sumatra, Java and Borneo, the Great East State should be quite independent. This was strongly promoted by the Christians who dreamed of much influence in this region. The Great East was a failure like the idea of a federal state in general. On 17th August 1950 the United Republic of Indonesia was promulgated.
After the long regimes of Soekarno and Soeharto, the new decentralization of Indonesia started with the independence of East Timor in 1999. Many Muslims saw this separatism of the Catholic Eastern province as a Christian attack on the unitary Indonesian state. Papua separatism, then Ambon or more general Maluku wars followed (also seen as a strategy to clean the Moluccas from Muslims). The disintegration of East Indonesia was seen as a Christian complot against Islam. In the West Aceh was allowed to proclaim implementation of shari’a, while the Christians of Manokwari proclaimed their capital as kota Injil, the city of the gospel.
Makassar in fact was always a majority Muslim city. Former vice-president Jusuf Kalla returned to Makassar in 2009. He is blamed or praised for making Makassar and many small towns in the Toraja region more Islamic. Some hope that he will restore the dream of the Great East as a more or less independent part of Indonesia, but now more Islamic. 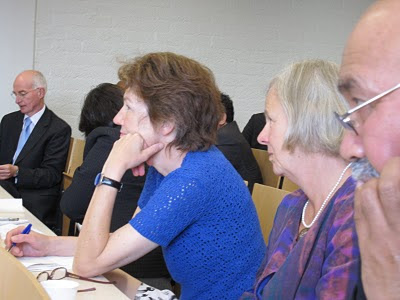 Religion is an important identifier in Indonesia. Besides sex, ethnicity, religion is probably the most important and certainly an inevitable marker of one’s identity. The same is true for Minahasa. A GMIM identity, or being a member of the Reformed Minahasa Church, is to be a member of the majority denomination. Muslims, Catholics, Adventists and Pentecostals are a minority, but all of them growing. Some people are fearing for Menado: it has now only a 60% Christian identity, with increasing Muslim presence. When in 1999 the Ambonese civil war started, many refugees came to Minahasa (also from Ternate and other sections of Halmahera). There were Protestant and also some Catholic militias who wanted to fight back. This did not happen.
In 2002, as an act of gratitude because the inter-religious wars had not disturbed Minahasa, a former governor started the building of an exceptional place of pilgrimage, Gunung Kasih or the Mountain of Love. Amidst a stunning nature reserve, a steep hill with many volcanic outbursts, a way of the cross with fourteen stations was build. On top a plateau was decorated with a common room and a row of five place of worship: from left to right a Catholic Church, a Buddhist and a Hindu shrine, a mosque and a Protestant church. Standing next to each other as a monumental act of grace to God that interreligious harmony was kept in this region and not disturbed through militant groups as elsewhere in the region.
This is the lovely and friendly face of ancient and modern Indonesia: a free place for all religions. The Minahasan people are sometimes criticised for being addicted to ceremonies, festivals, spending so much to celebrate community and harmony. They are blamed for being playful, loving splendid shows and games. From what I experienced of Indonesia during the last decade, this was the most creative and inspiring celebration of religious pluralism. Thank you, Kemerlien Ondang for showing me this, last year! Thank you Minahasa for this grand scenario for our interreligious match. Let it be and remain so! Amin, Alhamdulillah!
References
Ilusi Negera Islam: See http://www.indonesiamatters.com/5453/ilusi-negara-islam/
Feeling Threatened by Mujiburrahman http://igitur-archive.library.uu.nl/dissertations/2006-0915-201013/index.htm
Noorhaidi's dissertation is available at https://openaccess.leidenuniv.nl/bitstream/1887/13369/1/Dissertation+Noorhaidi.pdf.
Gepost door Karel Steenbrink op 01:29 Geen opmerkingen: