A minister of a small Protestant congregation in Florida wants to burn some 200 copies of the Qur'an later this week, Saturday 11 September. There are few supporters, many critics of this insane waste of paper. A symbolic act of protest against some people who live 14 centuries after the revelation of this sacred text?
This action reminded me of my farewell lecture at the Sunan Kalijaga Institute, now the State Islamic University of Yogyakarta, where I taught between 1984-8 after three years teaching at the sister institute in Jakarta. I discussed in this lecture the many writing of the Indian-Indonesian scholar Nuruddin ar-Raniri. He was Shaikhul Islam at the court of the Sultanate of Aceh between 1636-1643. I selected his discussion of Jesus in his many writings. He followed mainline Islamic thought, that sees Jesus as a major prophet, a servant of God, more specifically as Word of God and Messiah. But about Christians this scholar and politician (he was also minister of foreign affairs in the sultanate, thanks to his knowledge of languages) was sometimes very negative. In his book on the basic rules for Muslims, Siratul Mustaqim, still in use in some Acehnese Muslim schools, he puts the question how to do the ritual ablutions before prayer, when there is no water? Sand, textile can be used, but also paper. What about paper that has been used for writing? What to do when the stories of the Hindu Gods Rama and Indra have been put on that paper? What to do when the text of the Torah or the Gospel is on the paper? In these cases it is, according to Raniri, allowed to use the paper for ablutions, because the stories about Hindu Gods are of no use and Jews and Christians have falsified their scriptures. Only when the name Allah has been put on the paper, it cannot be used for ablutions. 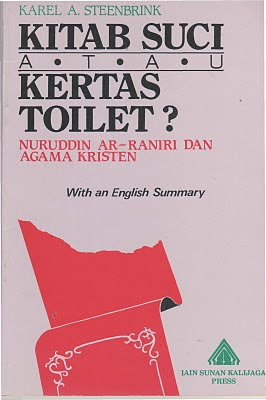 The title of my farewell lecture was announced as Kitab Suci atau Kertas Toilet or "Word of God or Toilet Paper?" The publisher, IAIN Sunan Kalijaga Press printed 3000 copies and these were all sold. A nice image of toilet paper was in put on the cover. It was several times quoted in academic publications and discussed as an example of nuanced debates between Muslims and Christians: sometimes with humour, with satire, with arguments. I thank my old Islamic institute for giving me the opportunity to debate the relations in such a relaxed atmosphere and wish the Indonesian society a continuation of this free exchange of experiences and ideas. I always felt safe, inspired and stimulated while working and living with my family on the Jakarta and later the Yogyakarta campus.
Gepost door Karel Steenbrink op 04:13 Geen opmerkingen: 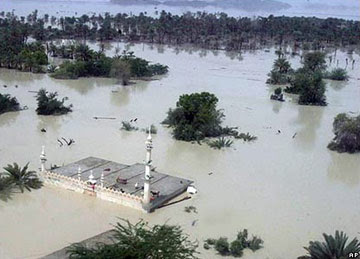 Through this medium I want to congratulate all my readers with the start, observance and end of Ramadan 1431. May this practice help us to cleanse our bodies and mind, improve relations between people and between human beings and their creator.
We remember the compassionate love of Abraham, who was willing to give away anything he had, even to offer his beloved son, but finally was happy to slaughter a goat and to celebrate the festival with his family, friends and many other people, especially the poor. May this sacred period be a blessing for all of us.

While looking for cards for Ramadan on the internet and with friends, I found many images of nice mosques, most often the Haram of Mecca. But I decided to take an image of a mosque in Pakistan, region covered by a disastrous flood these days. 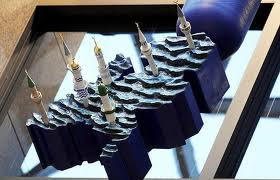 Besides this mosque in Pakistan you find here by contrast the work of the artist Kristof Kintera, designed for the building of the administration of the European Union in Brussels in 2009. He has an image of the Netherlands, also flooded and only mosques are still visible. As if the two enemies of our country: the old enemy of the water and the flood, besides the new one of 'islamization' are combined here.
We experience now the growing power of conservative politicians who use the fear for Islam as a means to attract attention. So, friends all over the world, join us in the fight against islamophobia! Mohon maaf lahir batin, forgive us out trespasses and enjoy Idul Fitr 4031!
Gepost door Karel Steenbrink op 01:30 Geen opmerkingen: