In her series Bilangan Fu now the third additional volume has appeared after the main book. Maya (published in Jakarta: Kepustakaan Populer Gramedia, December 2013, 249 pages, 42 chapters). The novel connects the main figures of the Saman Series (the priest Wisanggeni who has a love affair with the married woman Yasmin, the medical student and journalist Larung) with the central characters of the Bilangan Fu series, especially the spiritual leader Suhubudi and his centre near Yogyakarta. Parang Jati, the mysterious son (12 fingers, parents unclear) plays an important role.
The main story is that Yasmin with her daughter Samantha comes to the compound of Suhubudi with letters from Saman that must be given to Saman's father. She asks the help of Suhubudi to fulfill this mission, but in fact not much is done with these letters (that were sent from Amerika to IND, first understood as India and so they took two years before they arrived in Jakarta, also because JK was interpreted as Jammu-Kashmir, and not Jakarta). An important story line is about the precious  stone that was found by Parang Jati and later given to Saman. Suhubudi gives advice to Yasmin but suddenly has to leave for Jakarta to give a consultation to President, who on 21 May 1998 will resign as president. - A sideline in the book is the theatre group of disabled people who perform a wayang play of the Ramayana story in the compound of Suhubudi. There is another guest in the compound, the Indian Pak Vinod who organizes an international Ramayana festival in Chennai and wants to invite the disabled people (among them Maya who plays Sita).
The micro-level of the story is embedded in the larger history of modern Indonesia, with impressions about the way Soeharto took over the rule of Sukarno, his good start but many cruelties and opression of civil liberties, ending in his abdication in chapter 41.
Another background that plays an important role are aspects of Javanese spiritual and cultural lore: much about Semar (not like Rama and Sita who died, not like the prophets who died, still alive like the Holy Spirit, our inspiration, p. 178). 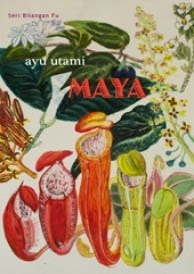 I give here some highlights, in line with my special interest and preparation for (another) article on her work. A first article, to be published in Wacana, journal of Faculty of Humanities, UI Jakarta concentrated on the novels. My second will deal more with  the columns and other writings, but also with the central themes of Modernity, Monotheism and Military: the three evils that are the enemies of all her writings.

Yasmin is not really spiritual: Ia tak begitu tahu apa itu spiritualitas. Baginya cukuplah ia punya agama; semua orang normal fi Indonesia berlangganan agama: she has no good or deep feeling for spiritual things. It is enough for her to be registered in a formal religion, like most Indonesians. (p. 15)

Jesus Christ is mentioned is someone who did not discriminate lepers (and other physically disabled people), p. 64-6. In line with Christ also Yasmin 'decided to love these miserable creatures'. In chapter 22 theology of liberation is discussed as the best approach to both society and spiritual elements of life.

There is not much about sex in this book. Chapter 26 gives a portrait of the psychology of Yasmin and her husband Lukas. He is an academic and a government official. She is a lawyer: they felt guilty having sex before marriage and therefore they married too quick, without proper preparation. Recently Lukas became more critical of the government and this turn to leftist ideas (in 1996, only two years before the fall of Soeharto) he became somewhat leftist: this also improved their relation.
The first chapter gives a dream of Yasmin where she imagines the priest Wisanggeni/Saman first in the ceremony of ordination to priesthood, but later at another place, where he is naked, looks like Jesus on the cross, but also attractive and they have sex. There is further not so much about sex in this novel. In one of the last chapters it is described how Yasmin has more interest in personal psychological contact and not so much in sex anymore.

Chapter 24 concentrates on Wisanggeni as a student of theology: at that time he was 'so busy with ordination for priesthood' terlalu sibuk ditahbiskan), and therefore he had no interest in social and political affairs and did not protest against injustice.

Page 197 presents the early Muslim missionaries in 16th century Java as orang berjubah men with cassocks, white long robes. There is much about traditional Javanese lore, quite often a Catholic milieu, but very little about Islam or Muslims. Chapter 34 is very interesting in the defense of  spirits dwelling in rocks, trees, mountains, rivers. Yasmin regrets that she did not learn to respect the spirits of nature and that she is not able to make an offering, sesajen.

The Academic Diplomacy of Budi Hernawan

3 June 2014 Budi Hernawan was in Leiden. He is an Indonesian Franciscan Friar, an acedemic and peace activist. He is now working in New York as part of an NGO lobbying for peace in Papua. At KITLV, the Leiden academic institute for Indonesian Studies he presented aspects from the first part of his doctoral dissertation: Torture in Papua as a Theatre: reconstructing abject citizenship of Papuans was the title of his lecture. [His dissertation can be found on the internet. The second part is about peace-building] 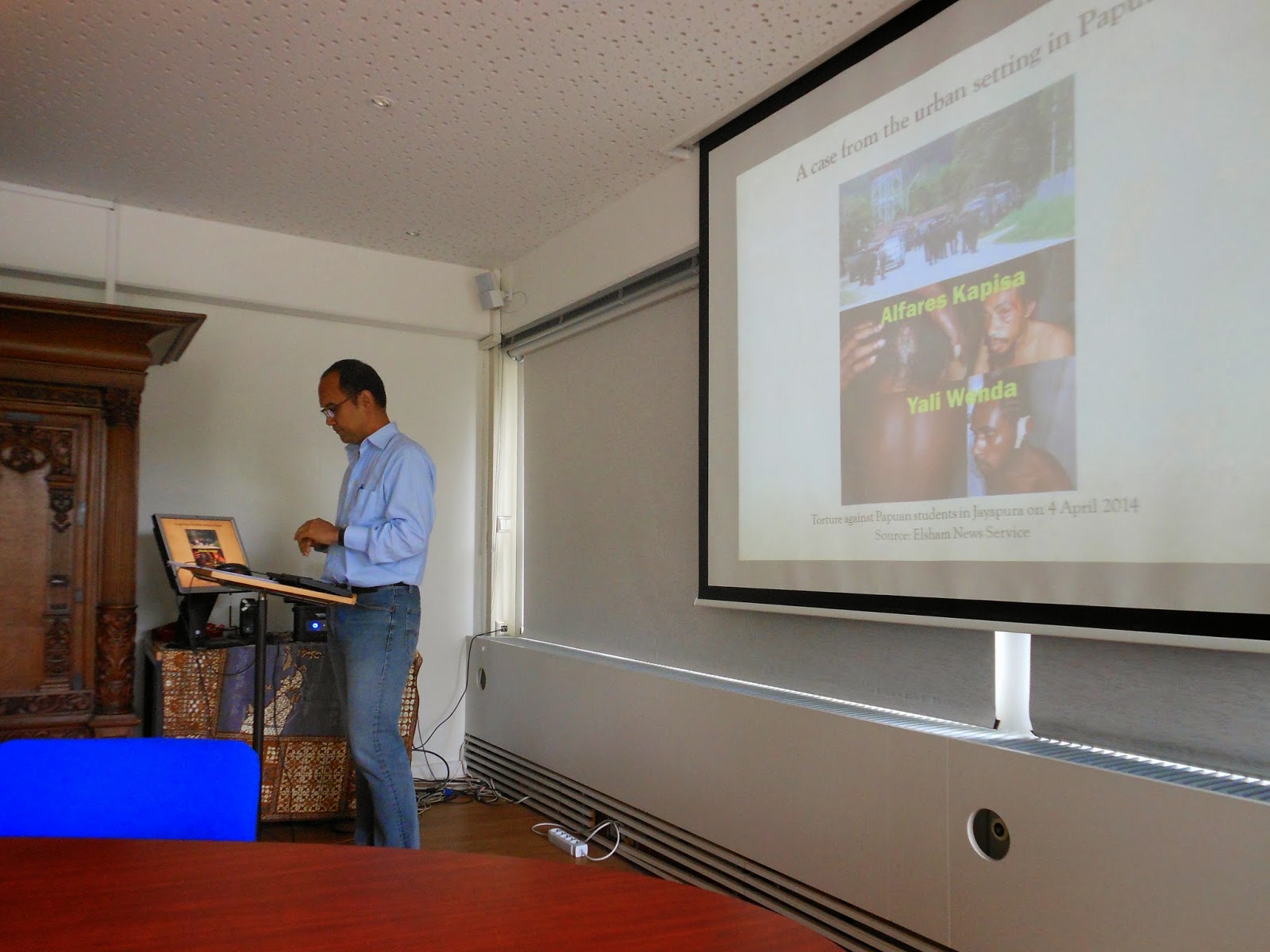 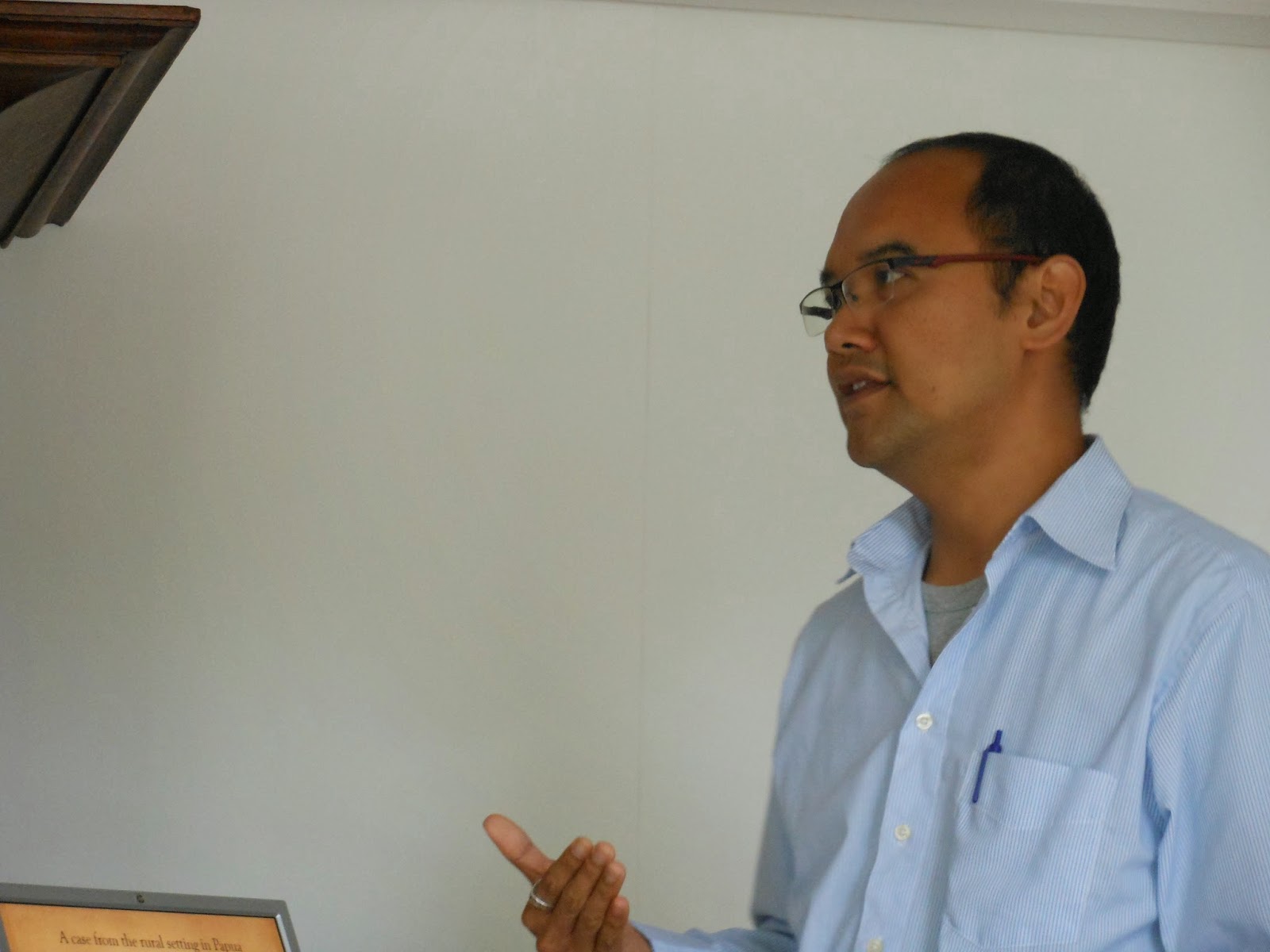 Budi Hernawan gave a quite dry, sober and analytical survey about the processes of torture in Papua. The players: police seeking OPM weapons and suspects. They do not speak a local language, while OPM members very often cannot speak Indonesian.
Budi mentions aspects of torture: it is like a ritual, a theatre, is public, spectacular, painful. He has identified 431 cases of torture. In all these cases only 2 OPM leaders/activists had weapons, all others were unarmed civilians. He analyzes the 'perpetrator factors': they follow orders, especially members of the army; they deny the cruelty or defend their actions ('the suspects defended themselves, attacked'), some like it and do it for fun. In all cases is the victim no longer considered a human being.
There are also various elements to be analysed among the spectators. 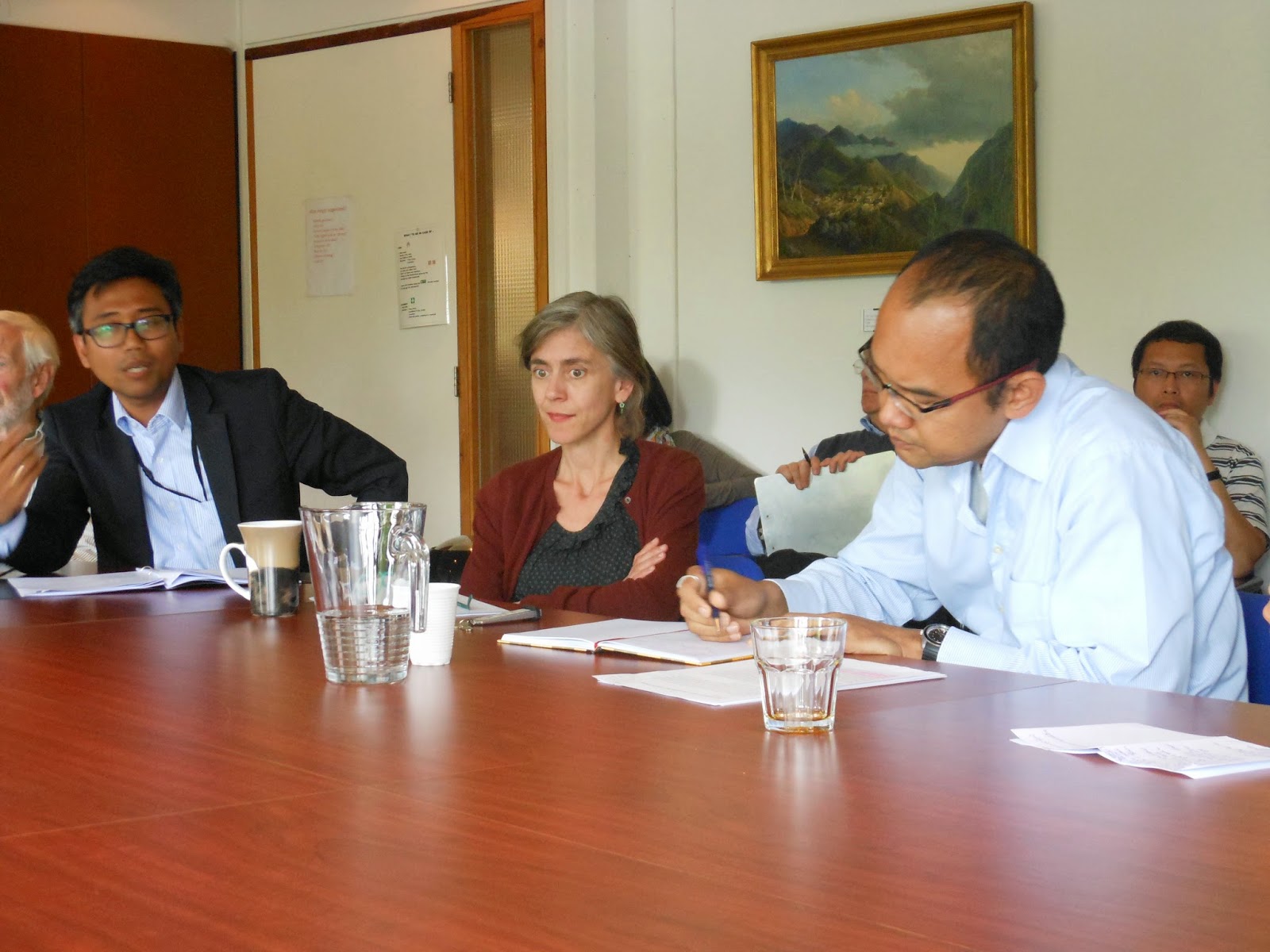 Among the audience (some 25 people, most Dutch academics, some Franciscan Friars) one was a diplomat of the embassy in The Hague. On the picture above he is on the left side.
He asked that he considered it impossible that this was government policy after the Soeharto regime fell in 1998? He was a very eloquent and honest yong man. Nico Schulte Nordholt remarked to me 'that is a good diplomat!'
Budi Munawar answered in a calm way  that there are double instructions: about the goal of the policy and about the mild/restricted use of violence  but the lack of control and the impossibility to bring any government official, let alone the army to court. Only in one of the 431 cases there was a judicial case, but not torture, but inobedience was the 'crime' of the military.
The debate then turned more general to the monopoly of violence of the government and the practice of premanism or the use of criminals for political goals. In the movie The Act of Killing there was Jusuf Kalla as prominent member of Pemuda Pancasila (and Vice-President at the time) who defended the wild and criminal actions of these militia members against any opponents of the government.
Anton van der Ploeg asked why the violence in Papua has been worse than in Aceh of East-Timor: is it racism? Are Papuans the lowest on the scale of Indonesian civiliazation, at least in the eyes of the superior ethnic group? Are they not seen as common Indonesian citizens?
Gepost door Karel Steenbrink op 08:12 Geen opmerkingen:

(De-)Kristenisasi in the Middle East?

12 May 2014 Herman Teule gave his valedictory lecture in Nijmegen as professor of Christianity in the Middle East. His title had as title: Lif and Death (?) of Christians in the Middle East. His title refers to a book of French diplomat Jean Pierre Valognes who wrote recently a book under the same title. In 2008 there was also a quite sensational book by Philip Jenkins, The Lost History of Christianity, where Jenkins describes how a majority of Christians lived once in countries that are now dominated by Muslims.
Herman Teule gave a great summary of diverse relations between various Christian denominations and Islam. Besides dark period (especially the Mamluks were criticized for their lack of tolerance), there were also periods when Christians really participated in the Arab-Muslim society and had great contributions to this civilization. The contribution to the translations of Greek text in Arabic in the Dar al-hikmah was an absolute topper here. 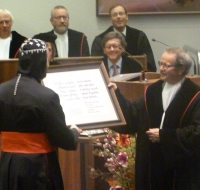 Teule blamed the tendency of Western European countries and churches (included the Vatican) to  claim a cooperation and close identity to these Christians and separate them from Arab Muslims.
From the Syrian Metropolitan of Europe (now living in the Netherlands, migrated from East Turkey and Syria during thelast decades) he received a calligraphy, but it must have been a gift with some negative aspects as well: these Syrian Christians (besides the Coptic Egyptian and Armenians, who now have both churches in my town of Utrecht) are diminishing in the Middle East because many members move towards western countries. 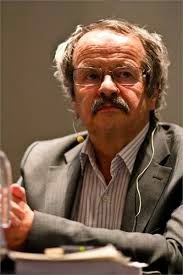 In the history of Islam the word Andalusian syndrome is used for the once powerful and prosperous communies of Muslim in Spain. They disappeared. In India the Muslim influence has declined sharply after the arrival of the British  and the independence in 1947 with the emergence of Pakistan asa Muslim State.
In Indonesia Muslims are afraid of the declining influence, but also Christians feel threatened by hardline Muslims. As to the battlefield in the Middle East for Teule the only solution is that Christians feel really Arabs, but also are accepted as such by the Muslim Arabs.