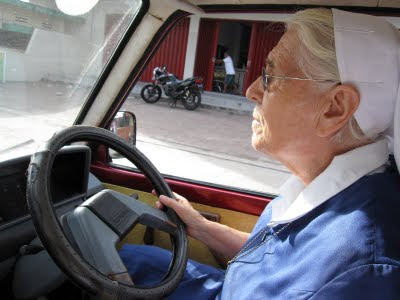 Since the 1920s the Catholic leaders tried to gain a foothold in Ambon (or regain if we consider that Ambon was 'Catholic territory, thanks to the activities of Saint Francis Xavier around 1546-7). A Cathedral was built and on a large piece of land along the prestigious Olifantenstraat, now Jalan Pattimura, the Daughters of the Lady of the Sacred Heart started a primary and a secondary school. After independence the Catholic bishops bought large pieces of land on the island (especially bishop Andreas Sol, 1963-1994). This was done with the idea that Ambon was the main island and the capital of the Moluccas and should have representative Catholic institutions, even though the number of original Ambonese Catholics was virtually zero. Most Catholics in Ambon originate from Kei, Tanimbar or Flores.
Although sister Francesco Moens (born 1938) was educated as a teacher, she was in the late 1960s and following decades one of the most important sisters to give a direction towards the turn away from education towards developmental work (in the large school compound of the Catholic school on the Jalan Pattimura nowadays no longer any PBHK sister is teaching).
Francesco established Rinamakana as a social foundation with many activities, from credit union to housekeeping courses and many other activities. She is a true missionary entrepeneur, keeps contacts with sponsors, is able to manage the programmes in an effective way. Her trusted cooperator over the last 35 years has been Flores (or rather Adonare) born Herman Palang Ama. In 2003 Sister Moens reached the age of 65, withdraw from the Foundation Rinamakane and Herman establied an NGO of his own, Moonsunray (Moon and Sun or Lerewulan is a classical expression for God in Flores).
Since 2003 Sister Francesco started a village in Passo, together with the Protestant minister Rev. Abner Latue. The houses were built at the cost of € 600. Most of the money was collected in the Netherlands and on all houses the name of the sponsor has been mentioned. Vila Lion is a house financed by some Lions Club. Some have the names of villages in the Netherlands like Varssum, Nieuwegein. There are now some 300 houses in the compound, called Lembah Agro, Valley of Agriculture (because the land was owned by an agricultural school).
There is a small section of some 30 houses for Catholics, but the vast majority is for the Protestant refugees from Buru. Initially they were migrant farmers from Java and because they were Christian they had to flee during the 1999-2003 war. Muslim migrants from Java could remain on Buru. Building started in 2002 and refugees were invited from Halong, the basis of the marine that gave place to so many refugees.
On 17 June 2002 also the first results were welcomed for the four water wells (one is called after bishop Sol who provided the finances; two are paid for by the sisters, one by the local government).The governor of the Moluccas paid already four times a visit to the compound. 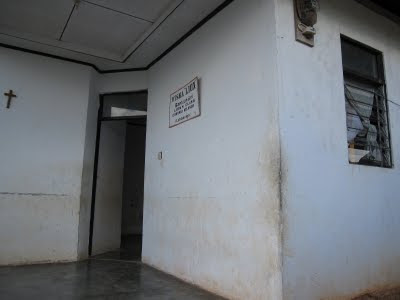 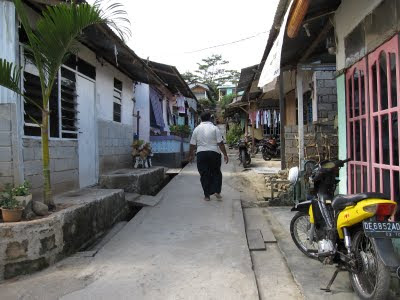 Above: the house dedicated to a Lion Club chapter and then the 'village chief' or in his own words 'the commander', rev. Latue in 'his village'.

Lembah Agro is not the only field of work for sister Francesco. We visited that morning not less than eight locations where she is working. Second was the NGO Moonsurnray of Herman Palang Ama. Third was a Muslim village, high up in the mountains uphill from the Muslim district Batu Merah. Not far from that refugee settlement for Muslims there is Pemukiman Andreas (named after Bishop Andreas Sol), some 100 houses for refugees and migrants from Kei and Tanimbar. There is no 'commander' as in the overwhelming Protestant Lembah Agro, but here in uphill Ahuru (where bishop Sol could buy a very large plot of land, for an orphanage, the noviciate of the sisters, for a place of pilgrimage with the staions of the cross, steep climbing to the top) there was extra land available for hits 'Andreas settlement'. Initially a Tanimbar priest was living here, but now there is no clear leader. It looked quite dirty (no regular management of garbage). 'People of Kei and Tanimbar expect that someway a priest will manage this for them, while the Javanese migrants who came from Buru show more dsicipline..'
We only gave a short look at the renovated stations of the cross, an initiative by the clergy of the cathedral church.
More attention was given to the former noviciate of the PBHK in Lahuru. In 2000 it was destroyed and before this happened the noviciate was already moved to Yogyakarta. Quite recently the buildings were renovated thanks to a government programme for rebuilding Ambon BRR, Bantuan Rehabilitasi dan Rekonstruksi the building looked perfect now. The sisters had not taken a close look at this reconstruction, had not paid for water and electricity and therefore it could not yet be used as a juniorate (some kind of preparation for the proper noviciate). The statue of the Pieta, badly damaged during the civil war, was still in its bad condition. 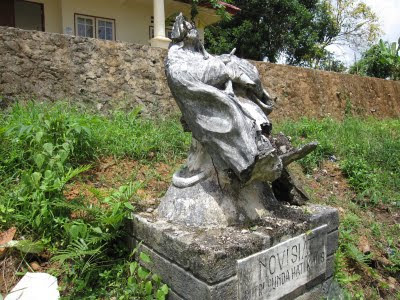 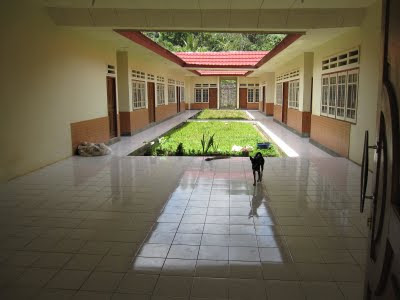 Finally we visited the orphanage, also destroyed and renovated with BRR money. Francesco complained that instead of true wood, the builder had used asbestos in the ceilings. She got really angry when she saw a sister cleaning rice from thousands of small beasts. The inspected the premises and found a large supply of rice and suggested that this contaminated rice should be given as food for pigs and the better rice instead used for the orphans. It was not her business and the modest sister who was doing this job in the full sun, continued her humble work. She wanted to expose the rice to the sun and the small beasts would die by the rays of the sun or at least disappear from the rice. 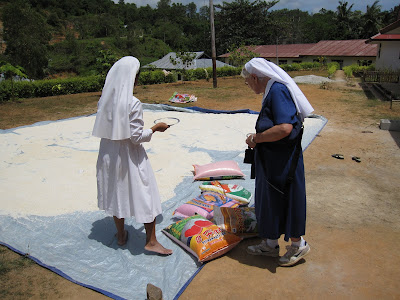 There are also dark sides of a figure full of energy and initiatives. Francesco complained several times about Indonesian sisters, especially superiors who hesitated to make decisions and in this way hampered her work. She was several times accused of doing things before official permission from her superiors was given. She even told some stories about true opposition within the religious order. Someone had used black magic against her cooperator Herman who had a piece of wood in his intestines by this method and had it removed in a hospital in Java. He had received advice from a Dutch-Indonesian Jesuit in Java, who had countered the black magic and gave him the advice for the operation. There is strong drive towards charity and social welfare among the sisters, but the realization sometimes may be difficult.
Gepost door Karel Steenbrink op 08:44