I am now quite busi with CMR, Christian-Muslim Relation, a Bibliographical History. Six volumes have been published an now I am writing for volume 8: the first to be published in the 17th century. One of the great figures is Jacob van Neck who went twice to the East Indies, was the first to make great profit, return quickly and write in a quite modest and peaceful way about Muslim-Christian relations, at least positive observations of what he (and other, because part of his writings is based upon the observation of others) really saw in the East. 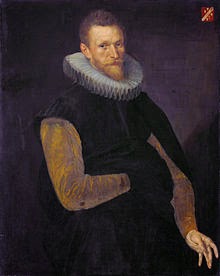 Part of my entry on Van Neck is about the contrast between Muslim doctrines, or the written accounts of Muslim, and the concrete or practical observations. While the written doctrines often are rejected as heresy, nonsensical phantasy or simple false doctrines, the first men who came to the Indies were really surprised to see the simple Muslim ceremonies, people praying, burying their dead people, more or less in the same way as Christians would do it. In the concrete encounters it is honest observation and even sometimes admiration. I write then that 'One may even speculate whether the later theory that these Indonesians were not truly Muslims, has its origin in the factual and somewhat romantic image by the first visitors to these territories' The Indonesians are not Arabs and anything positive in Islam is then qualified as non-Arab and non-Muslim.
People in Amsterdam were happy with the return of the rich fleet of Van Neck. Below a painting celebrating his return.

Rahardi and the Return of Jesus

F. Rahardi has been mentioned earlier in a short reflections about his book on the Catholic priest who wroked in Lembata. He is able to mix religion with some funny, or even absurdist stories. This is even more the case in his book of 2009 Para Calon Presiden (Yogyakarta: Penerbit Lamalera). It begins with a message that Jesus is returning to the earth and, after descending in Jerusalem (on the temple mount),coming to Indonesia with an aircraft of the Jordanian Army, to Ngurah Rai in Bali. It turns out to be different: he comes to Tengger first. After a few days in Tengger, he moves to West Java, where he has meetings with politicans near the top of the mountain Gede and in Cibodas. Together with the trips of Jesus, who meets Susilo Bambang Yudhoyono, Megawati, there is also a description of the elections campaigns of 2009 with important roles for Jusuf Kall, the Sultan of Yogyakarta (hesitating whether he will wanbt to become President, or Vice-President or just Ratu Adil). Jesus does not want to interfere in Indonesian politics, he stays out of the actions of the success teams for the various candidates, but only gives them moral support. 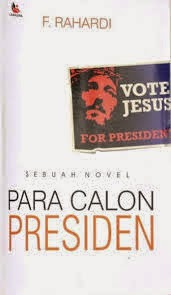 In fact Rahardi has writte a political novel, satire about political life in Indonesia. For Jesus he switches between Christian and Muslim terminologies: Jesus Kristus, Nabi Isa Alaihissalam. The Conference of Catholic Bishops and the Council of Churches are surprised that Jesus could come and the feelnot happy with the situation. They doubt. An official statement of the Bishop says that they still have to do inquiries 'whether the person who claims to ne Jesus, is really Jesus, the Son of God.' They stress that people now have to mee Jesus in the Eucharist. The Protestant Council of Churches wants to meet Jesus in reading Scripture. Also MUI, the National Council of Muslim Clercs, abstains from a judgment: this Jesus is involved in the national political elections and the MUI wants to remain out of politics.
On pages 279-280 the journalists put some questions to Jesus: how is his relation to Mary Magdalene? Who was his biological father? Was Jesus ever in Tibet? 'Well, about my biological father, you should ask Mary rather than me, because she is my biological mother. But I am never angry about naughty questions, nor my mother Mary. Only my followers may become angry about these questions.  ... Some talk about a Roman soldier, or some scholar in the text of the Torah. I am not worried about these things,because legally Joseph or Yusuf is my father.' Also about some stories about Jesus that are very similar to stories of the Buddha and Krishna: 'Indeed, that is the risk of being born some centuries after these figures.' Lovely light hearted writings. I wondered how this could happen: in the 1970s there was much problems about the story of the descent of Muhammad to the earth by Ki Panjikusmin, published by H.B. Yassin: court cases and intimidation. Is Rahardi not so well known or has the climate changed?
Gepost door Karel Steenbrink op 08:18 Geen opmerkingen:

Indonesian Islam is 'colourful and relaxed', fit for export according to Azyumardi Azra

During the last few years I have given several times a course of eight lectures on international Islam. These courses start with the three central countries of early Islam: Arabia, Persia, Turkey. They are followed by convert after 1000CE: Indian subcontinent, Indonesia, African Muslims. No 7 is the modern Islam in the West and last session for conclusions. For each Muslim culture modern novels were discussed besides the historical and cultural data. Always the conclusion was that the Muslim world is very diverse.
This is also a main theme in an interview in the daily TROUW of 2 March 2015. Reporter Wouter van Cleef (living in Japan) had a talk with Azyumardi Azra of the Jakarta Syarif hidayatullah UIN (Universitas Islam Negeri). The title was: Exporteer de kleurrijke en relaxte islam van Indonesië. This reminded me of an observation by G. Drewes in 1955 (in a book on the Muslim Word by Grünebaum): they were always good followers, they never have taken the lead.  In Mecca, in Damascus, in Cairo they were industrious students, but not leading reformers. 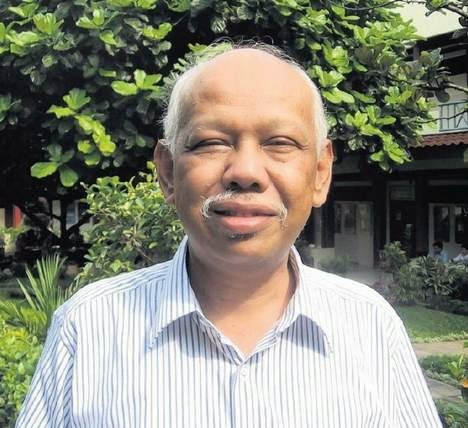 Here Azyumardi expresses the need for a Muslim Enlightenment that could and should start from the moderate and modern Indonesian style of Islam. Important is that the two great organizations (Muhammadiyah and Nahdlatul Ulama) may count on some 150 million members or sympathizers. Moreover there is a strong sufi interest and concern among Indonesian Muslims. Arab traditions like wahabi Islam are too 'dry' for Indonesians.
In the period of Yudhoyono some politicans sought support from radical islamists, sectarian groups and therefore under his presidency these radical groups could begin violence and not much action was taken against this. Indonesians have tried to propagate their model in a modest way to other countries, but they have not continued these actions. Another problem is that Indonesians have a big market where they can use Indonesian and they do not often publish articles or books in Arabic or in English. Good to read this in a Dutch newspaper!
Also in the Netherlands the Indonesian Muslims are modest. Indeed, they are a minority among larger groups of Turkish and Moroccan Muslims. But quite a few hardline preachers from Syria and Egypt have a following among various nations, while the Indonesian Muslims mostly only seek a following among themselves. A nice exception of Ahmed Pattisahusiwa as Sufi shaykh of Indonesian/Moluccan offspring who preaches the Haqqani-Naqshbandi variant of sufism according to Shaykh Nazim al-Qubrusi (from Cyprus). My students loved to go there to see the darwishes dwirling!
A nice observation is the trouble in the Middle East about cartoons like those of Charlie Hebdo. They have little experience with secular people in their society and do no know how to react.
Gepost door Karel Steenbrink op 21:50 1 opmerking: