8. When is there enough religion? About the 10% religious tax 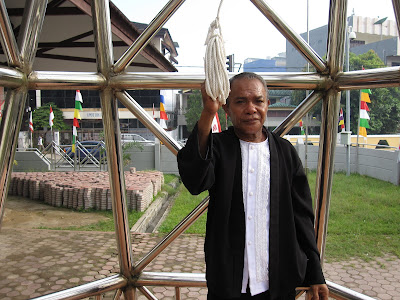 As I mentioned already in the section below, on 27 August we had a long talk with staff of the theological faculty of the Protestant UKIM University in Ambon. I was astonished to see such conservative, traditional Calvinist Christians. They consider Ambon ideally as a Christian dominated region, an Indian Sion in the style of the book by Schutte and Niemeyer. They have in mind a Christian society that is very strongly dominated by church life and in fact by the ordained ministers. (This is a great difference from the periods before 1935 when there were only few ordained ministers and the local congregations were only served by catechists/teachers, the guru jemaat. One of their great problem, they said, was still the shortage of ministers. Ideally even small villages of twenty families should be served by a minister, not only for the Sunday services, but nearly every evening and morning. The great problem is the shortage of money in the church (ministers are paid directly by the central office of the synod in Ambon, for the whole province of the Moluacces, until Babar, Kei and Tanimbar islands).
In the discussion I put forward the case of the Protestant faculty in Tomohon where the number of new students had been reduced because there is an surplus of theologians and graduates from the theological school in Minhasa have to wait several years before they can start their vicariate (in fact a period of practical training in a local congregation). After finishing the vicariate they still have to wait several years before they can be ordained and nominated full minister.

Both in Minahasa and in Ambon there are no complaints about the liberality of the faithful. This is, however, still somewhat stronger in Ambon. The church has envelopes for the tenth (according to Deuteronomy 14:22) where it has been written: perpuluhan, milik Tuhan or: 'the tenth is God's property'. It is even explained with the story of paradise: there were two trees that were forbidden for mankind. In the same way, 10% of all income is owned by God and man would be stealing from the Allmighty if he or she would take it for him or herself.

In this vain we see a tendency for rich congregations to enrich the church buildings and make them more and more beautiful, but as to the ministers, to increase their importance and to minimalize the function of the lay preacher for a small congregation, the guru jemaat. We will see in the discussion with Kees Böhm, that somehow a same tendency also is creaping in the Catholic community, although Böhm himself has another vision.

The photograph reproduced here shows one of the sacristans of this Moluccan Protestant Church, ringing the church bells on a Sunday morning. Also this sacristan wears the traditional formal dress. Many churchgoers of the Protestant church in Ambon were dressed in black.
Gepost door Karel Steenbrink op 06:03