We saw manypeople, but only few books at the official opening of the Asian Library in Leiden, 15 October 2014. The old theatre inthe Lipsius Building was more than fully booked for the inevitable lecturfes preceding to opening in the library building. Interest in Indonesian and Carribian Studies is still a sentimental affair and this was given 30 minutes for Adriaan van Dis who was born in the Netherlands in 1946 as the only child in a family that had dramatic experiences in Indonesia (the first spouses of father and mother died during the Pacific war; his father worked on the Pekanbaru railway). So, 'it was blood that counts' described Van Dis early society in the Netherlands of the 1950s and 1960s. 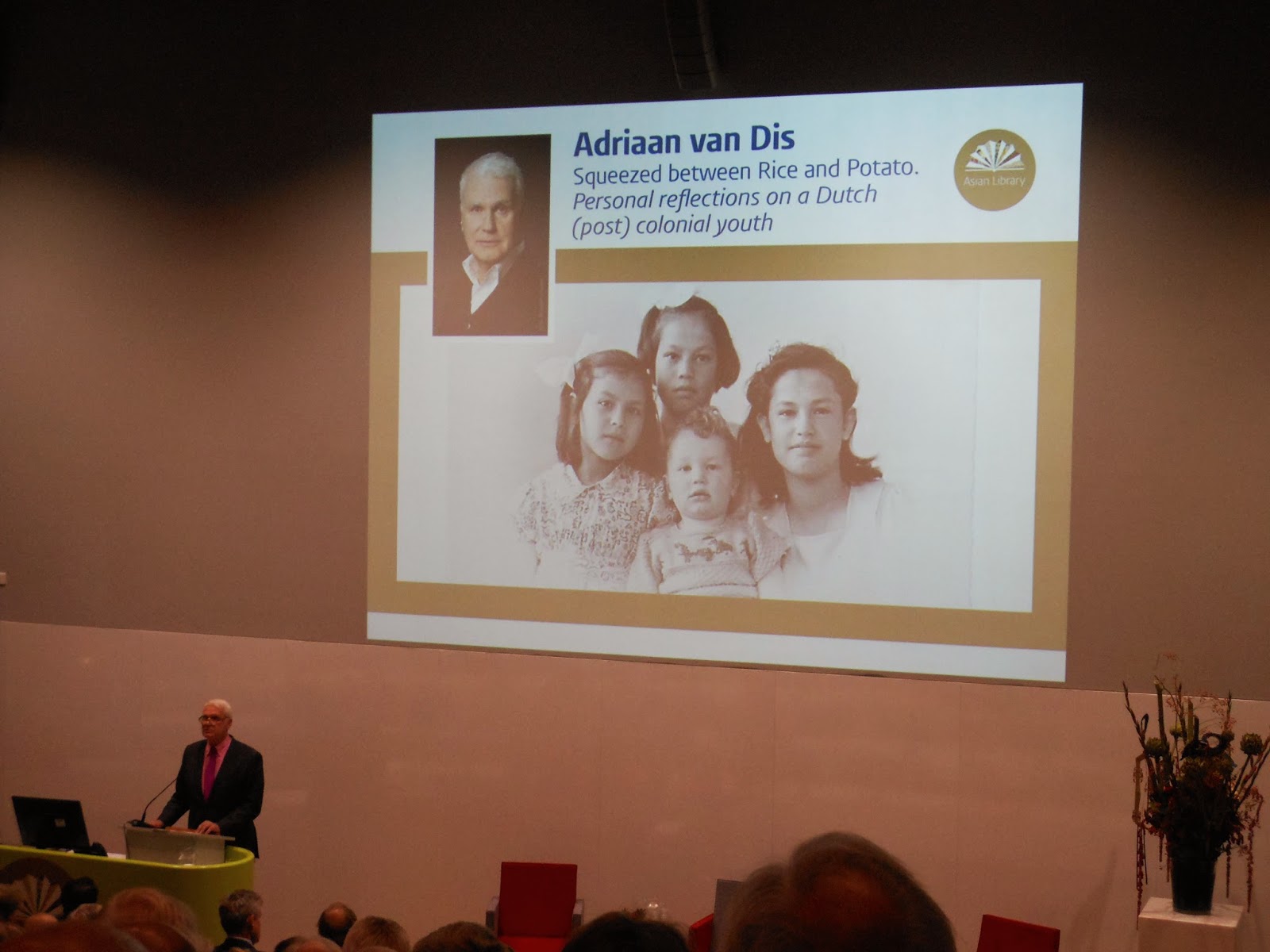 After the lecture there was a debate with David Henley, Henk Schulte Nordholt and Elizabeth Pisani, author of a book Indonesia etc. Exploring the Improbable Nation. She commented on the Indonesian Declaration of Independence: not a long and elaborated manifesto but just the fact of independence was mentioned and 'everything else will be regulated later..' bisa diatur nanti..The interest of cultural knowledge is directed towards the contemporary period, not the old books and manuscripts that made KITLV so important, but research on the modern developments. And here we saw a learned trio of people who commented in a journalistic style on the modern development. 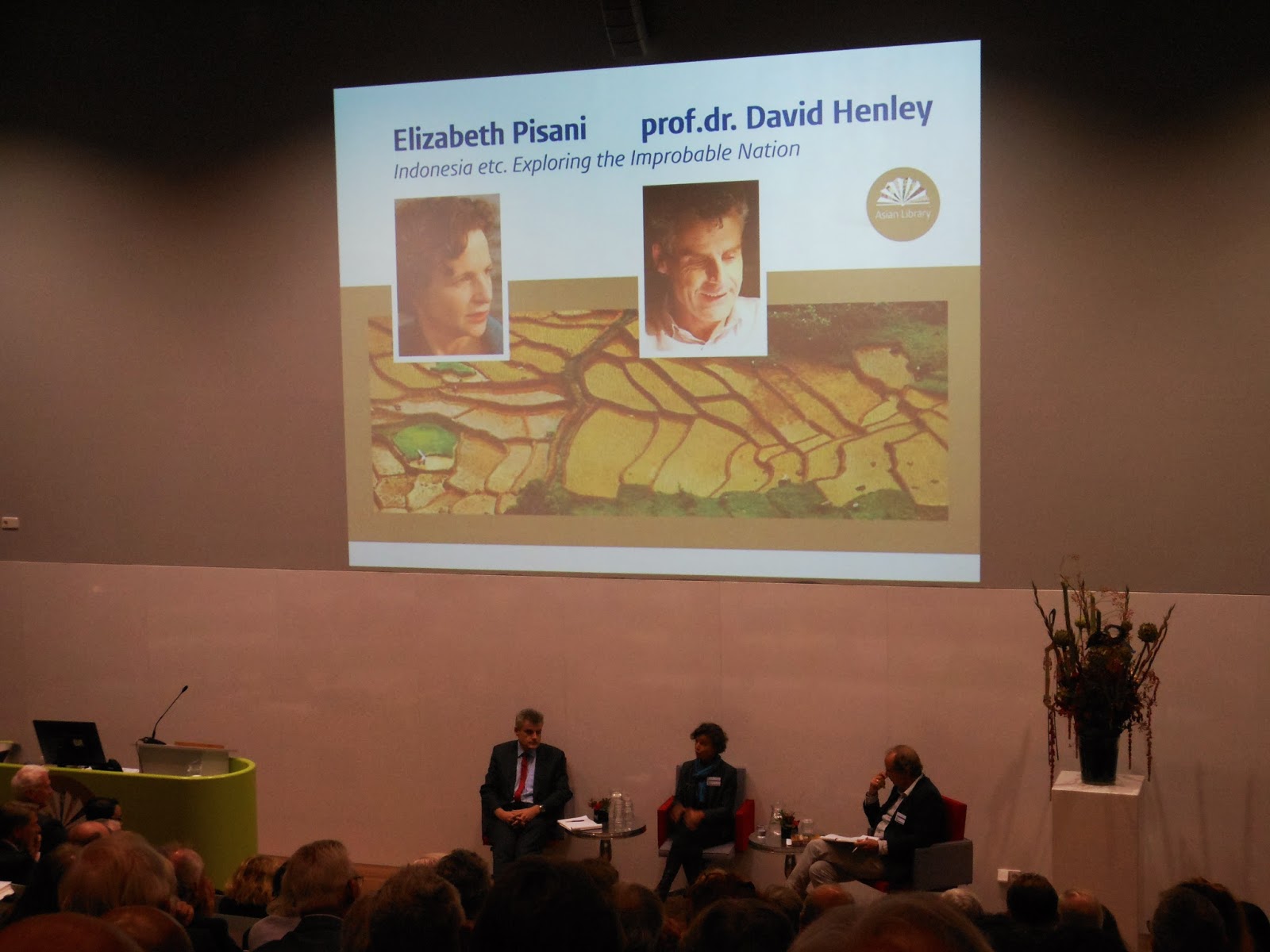 The commentators were rather pessimistic about the possibilities for Jokowi, because his economic vision is not so clear and maybe not realistic, considered his weak basis in parliament. And Henk SH said: and still there is economic growth of 5% per year during the last decade!  Corruption: the best way tocombat corruption is to set a good example. Maybe, in fact some things cannot be beaten totally, but restricted, brought under some control.

Ambassador Retno Marsudi had nice words about the 'special relation' between the Netherlands and Indonesia.

Then we moved to the other side of the canal, Witte Singel, following the KILV books that are now in that new building. There was a nice atmosphere, some good food and more even, good people. 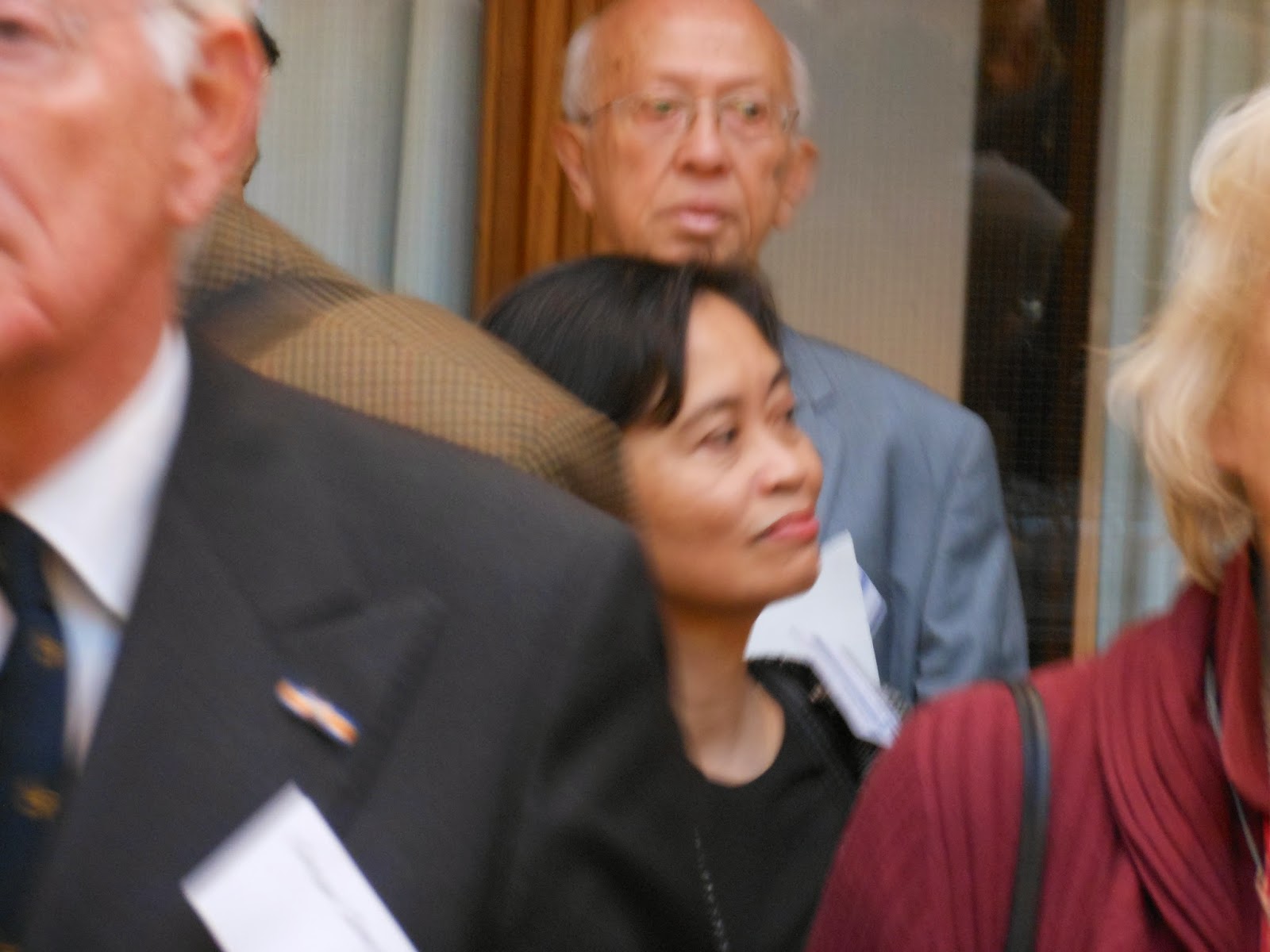 Pram Sutikno, KITLV librarian between 1975-1993, stood in a modest way somewhere in the back row, surprised that watching so many people he had to conclude that he did not know so many people in the big audience. The books will remain, people change: they write new books, mostly taken from the older ones and from their own experiences. I heard that less and less books will be stored in the main building: they must be removed, in order to give more place to people. That is in some respect a nice policy and we trust that we will be able to find and borrow the books. 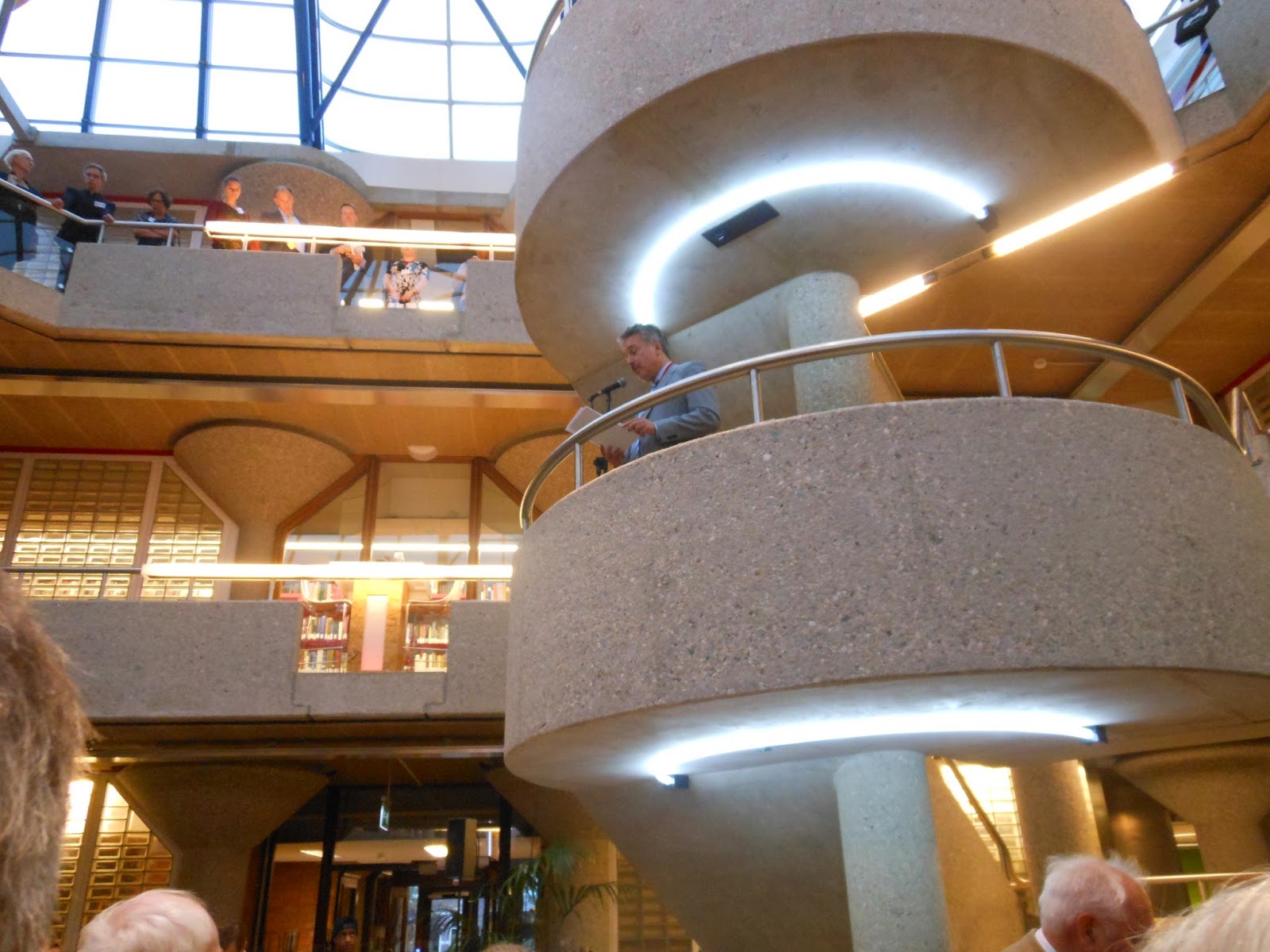 I am preparing a lecture for Nagoya (Nanzan University) and Tokyo (Sophia), where I will give some views on modern religious development in Indonesia, also seen through the eyes of Catholics. This is more or less another phase in my 'serial conversions': after finishing the third volume on Catholics in Indonesia, I will more turn to Muslim developments.


1° In 1984 Husnul Aqib Suminto defended his doctoral dissertation on  the Islamic policy of the Dutch colonial government. His main argument was that the devotional activities, prayers, pilgrimage, celebration of holidays, building, maintenance of mosques, the ‘strict religious’ practices of Muslim could be continued and even sometimes supported (religious courts for marriage, inheritance), but that political activities were severely controlled, supervised and quickly forbidden. Alfian (alsi nicknamed Alfian Alit, little Alfian, who wrote on Muhammadiyah in the late colonial period, to differentiate from Ibrahim Alfian, the tall Acehnese scholar) asked him whether there was a difference between colonial and modern Indonesian strategy towards Islam under Suharto. The audience laughed, because it was not really a question but rather a statement and Suminto politely answered that in fact there was not much difference.

Things were changing already at that time. As I see it, a policy of distance between government administration and the life of religions made a substantial turn in 1974 with a more active role for the major religion in the administration of marriage. This increased in 1989-1991 with the law and the guidelines for religious courts. As sketched above the administration has since then taken more steps towards public support of implementation of religious rules and values, with under the period of Reformasi as major developments the introductions of shari’a rules in Aceh and about 10% of all districts, more religious education according to the religion of the pupils and in 2008 the law on or rather against pornography and porno-action. A dark development since then has been severe measures against Ahmadiyyah and Shi’a Muslims, heavily supported by President Susilo Bambang Yudhoyono and Minister of Religions Suryadharma Ali. It must be awaited how the new administration of Joko Widodo will handle this policy.


2° In 2006 Andrée Feillard and Rémy Madinier, two French scholars, published their book La Fin de l’innocence? L’islam indonésien face à la tentation radical, de 1967 à nos jours. It was published in an English version in 2011 with the subtitle of Indonesian Islam and the Temptation of radicalism. They seek the roots of the radical Islam in the secessionist Darul Islam movement of the 1950s, of conservatism in Muhammadiyah, since it vety beginning, in Dakwah since the beginning of the new order of Soeharto, the radical activities in the big campuses of the country (Bandung, Yogyakarta), while FPI, the Muslim Defence League from August 1998, Lasykar Jihad and similar movement were the radical continuation in the period of the Reformasi.
In 2011 Bob Heffner published an article with the challenging title of ‘Where have all the abangan gone?’ Where are these non-dogmatic, somewhat syncretist Muslim, still seen as the majority of the Javanese Muslim in the 1960s and 1980s? He considered religious education by orthodox teachers at state schools as a major factor. In 2013 Martin van Bruinessen published a book with the title: Contemporary Development in Indonesian Islam: Explaining the ‘Conservative Turn’, where a major significance was given to the end of the centralistic Suharto government and the rise of populist Muslim orthodox parties.

3° In this contribution we take the longer period and see a continuity in the development since 1974 when the Ministry of Religion was no longer a pure administrative unit, but could start to play a more active role in one of the basic elements of daily life of Muslims: family and marriage. Until the law on pornography of 2008 this has increased. Perhaps we should even go back to the colonial period when the Dutch took over the role over the former sultans and other rulers as heads of religion, much more than the French who strongly defended a secular society and the British who held the system of indirect rule. Bousquet wrote in the 1930s already a critical, not say a nasty description of this pro-active policy of the Dutch. Is this a (not the only) explanation for the state supported-radicalism of modern Indonesian Islam?
Gepost door Karel Steenbrink op 07:54 Geen opmerkingen: