6. Indonesian Imitations of the Vatican

This is the one of 18 short impressions of the trip of Karel and Pauline Steenbrink to East Indonesia in preparation for the 3d volume of the book "Catholics in Indonesia"
Dr. Yong Ohoitimur, our main host and facilitator during the period of encounters in Minahasa, explained the structure of the National Catholic Council (KWI) and the structure of the diocesan offices. They all have imitated the structure of the Roman Curia after Vatican II. In line with the division of the Roman congregations, the national office in Jakarta started in the late 1960s offices (and committees)for inter-religious relations and human rights, for misson, for peace and justice, for catechesis, for theology and many other aspects of Catholic life. Some ro more active than others. In total there are sixteen of these committees in Jakarta. Some are also very close to Vatican Instructions, while others are more looking at the local needs of Indonesian Catholics. On the diocesan level the same committees are instituted, but some of these are quite dormant. One of these committees at the national level is on the education of priests. Here two issues are quite prominent: 1. the preference for diocesan priests among the bishops; 2. seminaries have to be seen as exclusive institutions for the educations of priests, not for lay theologians or catechists or even teachers of religion.
The national committee visited recently the Major Seminary of Pineleng, where both MSC as diocesan candidates for priesthood are educated, but also catechists and teachers of religion (in a special faculty, but classes are quite often together). There was quite recently even a boarding house opened for female students in the Pineleng campus. That is against the strict rules for seminaries from the Vatican. However, the staff of Pineleng Seminary explained to the committee that this was local circumstances and for the next decade the situation would have to remain as it is now.
In the bookshops a publication is sold, written by a lay writer from Solor, John Wolor, Menggugat Identitas Pastor dan Keabsahan Sakramen (Jakarta:Kasih 2009). In 233 the author fights for the great difference between lay people and clergy, more in the style of the magazine Confrontatie, between liberal and tradtional thinkers in Netherlands in the 1970s and 1980s. Most of the text is based on conservative American writings, but there are also some references to the Indonesian situation (like p. 221 about Redemporist versus diocesan clergy in Weetebula, Sumba).
On the whole there were not many problems between liberals and conservatives after Vatican II.

About the Pineleng seminary I include two photographs. Below we see first Dr. Yong Ohoitimur with Mrs Steenbrink-Maas and then the painting behind the main altar of the chapel: painting and woodcarving are made by Jan Boelaars MSC who taught here anthropology for many years, after being active as a scholar and missionary in South Papua: a truly gifted person. 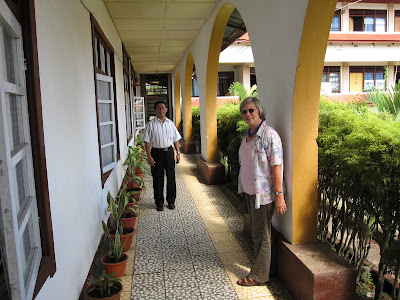 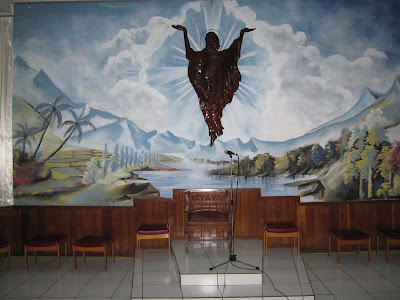