The VOC under attack again

The National Acrhives in the hague have finished  their digital copy of the VOC archives for the period 1600-1800 as to the Dutch resources and to celebrate this new access for sources on Indonesia (and many other regions like Muscat, Ceylon/Sri Lanka, Malaysia) an exhibition about the VOC has been opened in the building of the National Archives, attached to the Cerntral Station of the Hague.
In its  first review a comparison was made with 2002 when there was a celebration of 400 years VOC. At that time historical memory was dominated by pride: how the Dutch had been able to establish such a big enterprise, worldwide, the first global business.
Now it is quite different. Nancy Hovingh, the lady who is responsible for designing the exhibition read to her surprise 'how open Dutch staff of the VOC were about corruption, the way they could become rich in an easy way, even with the trade in slaves.' Much violence is now shown and it is clear that the VOC was much more than an innocent trading firm, it was building an empire with the goal to make much profit at all cost.
Much attention is now given to the way the Dutch treated the blacks in southern Africa. Much attention is also given to one of the warrior-governors, Cornelis Speelman who in an alliance with Bugis Arung Palakka destroyed the Makassar kingdom/sultanate and established in Makassar an important fortificatioon for the VOC in their efforts to dominate the trade in spices. Like was done later by Westerling in the same region,. 1946-7, this was not possible without burning some 30 villages in the region with many casualities. This was the price for the spice trade! The big drawing made in praise of Sipalman alias Speelman and Arung Palakka now has become one of the emblems of the exhibition. 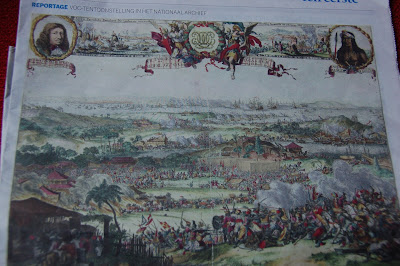 A Miracle in Bogor?

GKI, Gereja Kristen Indonesia is simply known as the 'Chinese Church' in Indonesia. In 2001 its congregation in Bogor bought a piece of land to build a new church. Until 2006 they collected money for the construction and 445 signatures of people living in the neighbourhood of the Jasmin Garden. In this wat they received on 13 July 2006 an IMB, Izin mendirikan bangunan or building permit from the mayor of Bogor. In January 30 citizens of the town protested against the building of a church and the mayor easily gave in and forbade the building. The GKI went to court and several judges estimated that they were entitled to build the church, between 2008-2011. But still the mayor did not give in an building came to a standstill. 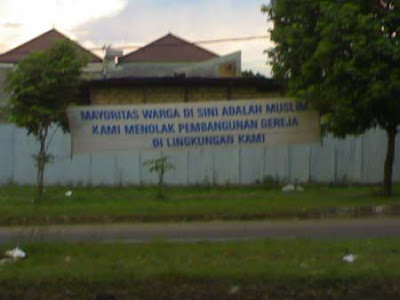 The poster above announces that "the majority in this district are Muslims who do not like the coming of a church building here.
Yesterday, 12 February 2017 there seemed to be a new development in this long case: an agreement is announced, that this piece of land will be partly used for a church, partly for a mosque. If this comes true, then a situation may rise like in Surabaya, where a church is built next to the largest mosque of the town, and Jakarta where the old Catholic Cathedral has the magnificent Istiqlal Mosque as its neighbour. Until now the congregation of GKI Yasmin holds its services in the open air, sometimes even on public places, praying and protesting at the same time. A similar problem is still going with the Batak Church (HKBP) in bekasi. 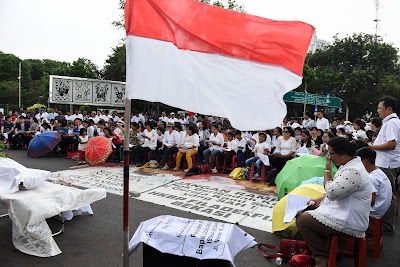