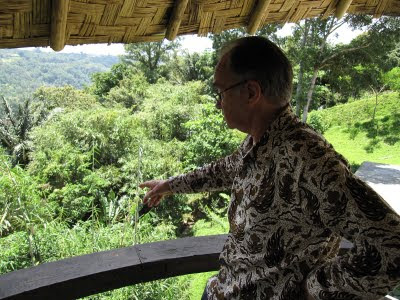 There are many young priests, even more religious sisters in Indonesia, but vocations to the lay brothers are rather few. Several Dutch orders who have worked in Indonesia could not gain enough members to continue their existence in the new country, while they are no longer able to attract new members in the Netherlands either.
One of these order are the the Congregatio Septem Dolorum, with a central house in Voorhout. They have a branch in Indonesia since 1948 that was not really flourishing. In 2001 they had only five Indonesian members and were about to die. they once had 20 members but then the growth had stopped and most had returned to the life of lay people. But then a very charismatic sister of East Flores, Sister Gabriella PRR said to the last Dutch friar: 'This should never happen. I will send you good candidates. A few months later she sent 4 candidates from Larantuka and this continued. Now there are 17 young members of the TDB or Tujuh Duka Bunda Maria, most of them in North Sulawesi.
We visited Han Gerritse in Tomohon at a moment when Theo Blokland, prominent member of the congregation in Voorhout, was visiting the young branch, that is formally an independent congregation of diocesan scale (Manado). Still, friar Han Gerritse happened to find the two volumes of the Indonesian translation of Catholics in Indonesia in the library of the small convent and took time to show us the social activities of this young community. A Credit Union, in cooperation with Rabobank Microcrediet had proved to be a failure, although in many other regions of Indonesia credit unions are a major social activity of the Catholics. A major success was an education for physiotherapy, the only one in East Indonesia, besides one in Makassar. The institute is a department of the Salesian University, established in 2000 and has attracted quite good attention in the region and even abroad. On a regular basis a few Dutch students follow here courses of one year to integrate the technical and social aspects of their medical specialization. A new building was about the be inaugurated a few days later. There are some 140 students at the college that is recognised by the Indonesian government. The college has received in the beginning much support from Cordaid.

Hans Gerritse has established in the 1970s and 1980s a new initiative: medical care in primary schools with regular control of health of all pupils and a programme to start prevention of major diseases, in cooperation with the Catholic hospital Gunung Maria or Marian Hill in Woloan. Due to lack of finances the hospital stopped this facility in the 1990s, much to the regret of Gerritse who considered this programme as one of his most important initiatives. To honour him, we add on top of this section a picture of this modest man who took us not only to his various foundations, but also to some of the most beautiful panoramic places of this mountainous region.
Another, much more modest activity is a small workshop to make Christmas cribs. Pupils from primary schools receive a training to make the figures from plaster and to paint these. They earn enough to pay their schools fees with this work that they can do after school. See the picture below. 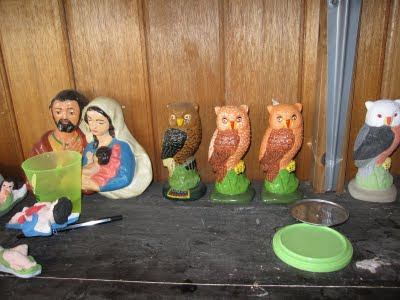 A much more shocking activity of the new religious order is a home for very serious handicapped children, both mentally and physically. Its was initiated by a Dutch lady in cooperation with Han Gerritse (a nurse by profession). In a very well equiped house some 25 children receive full care, with a good team of nurses and other health workers. In many parts of Indonesia parents do not really know how to care for these children and there are no government facilities for this kind of care. The young congregation of the seven distresses of the Mother Mary see this as one of their special vocations. 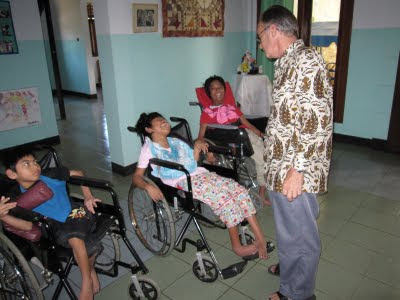 Han Gerritse is a quite sober and practical man, who could very well be seen as a development worker in the field of human care. But he is also the spiritual leader of the new religious order. Besides running his practical projects he is also the leader of the noviciate, takes care for the training in meditation and spiritual development of the young members of the order. In his simple premises there is not only a chapel, but also a special room for meditation (where the friars are sitting on the ground) and everywhere in the house one may find various examples of the image of the pieta, from western-style kitch to a more Javanese-style image, as shown below. 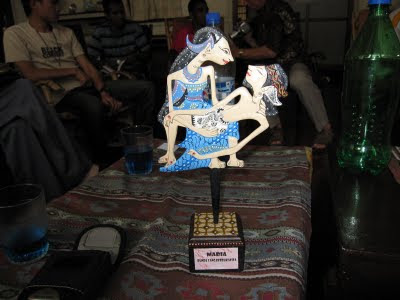