Thursday 23 October 2014 we had free time in Nagoya. Yasuko Kobayashi had invited her excellent student in Nanzan University, Aoi Sugiura, to accompany us to several places of interest in Nagoya. Aoi speaks Indonesian fluently, thanks to a longer stay and some shorter visits (Yogyakarta longest period, but also Minangkabau and Makassar). Aoi wants for this moment to work as a journalist in Japan and leaves her engaged professor a little bit frustrated. But Yasuko also had to acknowledge that it is not easy to find money for graduate studies. And after that: job opportunities in Asian Studies are limited and Asian Studies is mostly concentrated on China, not on Indonesia or other Southeast Asian countries. 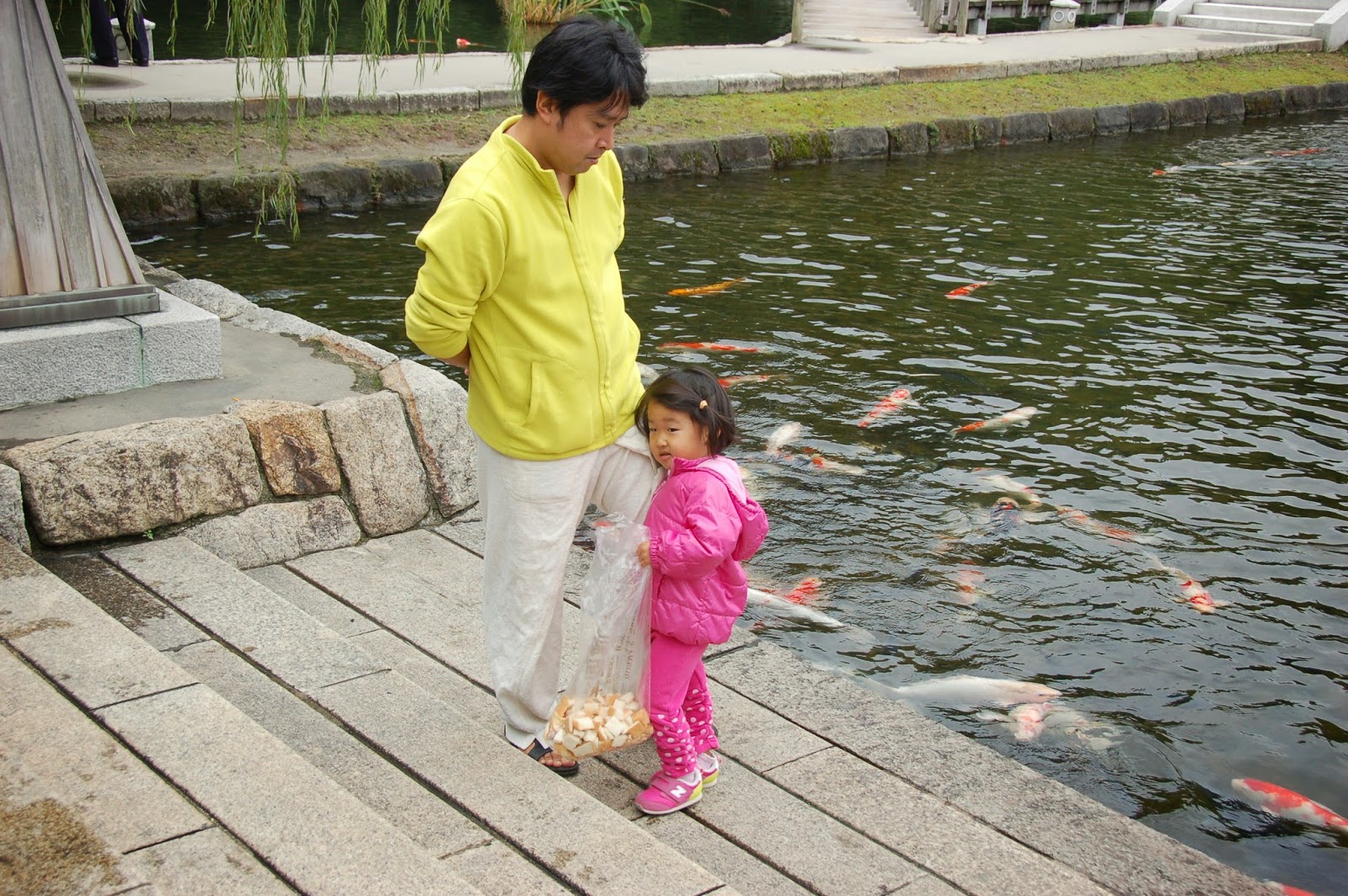 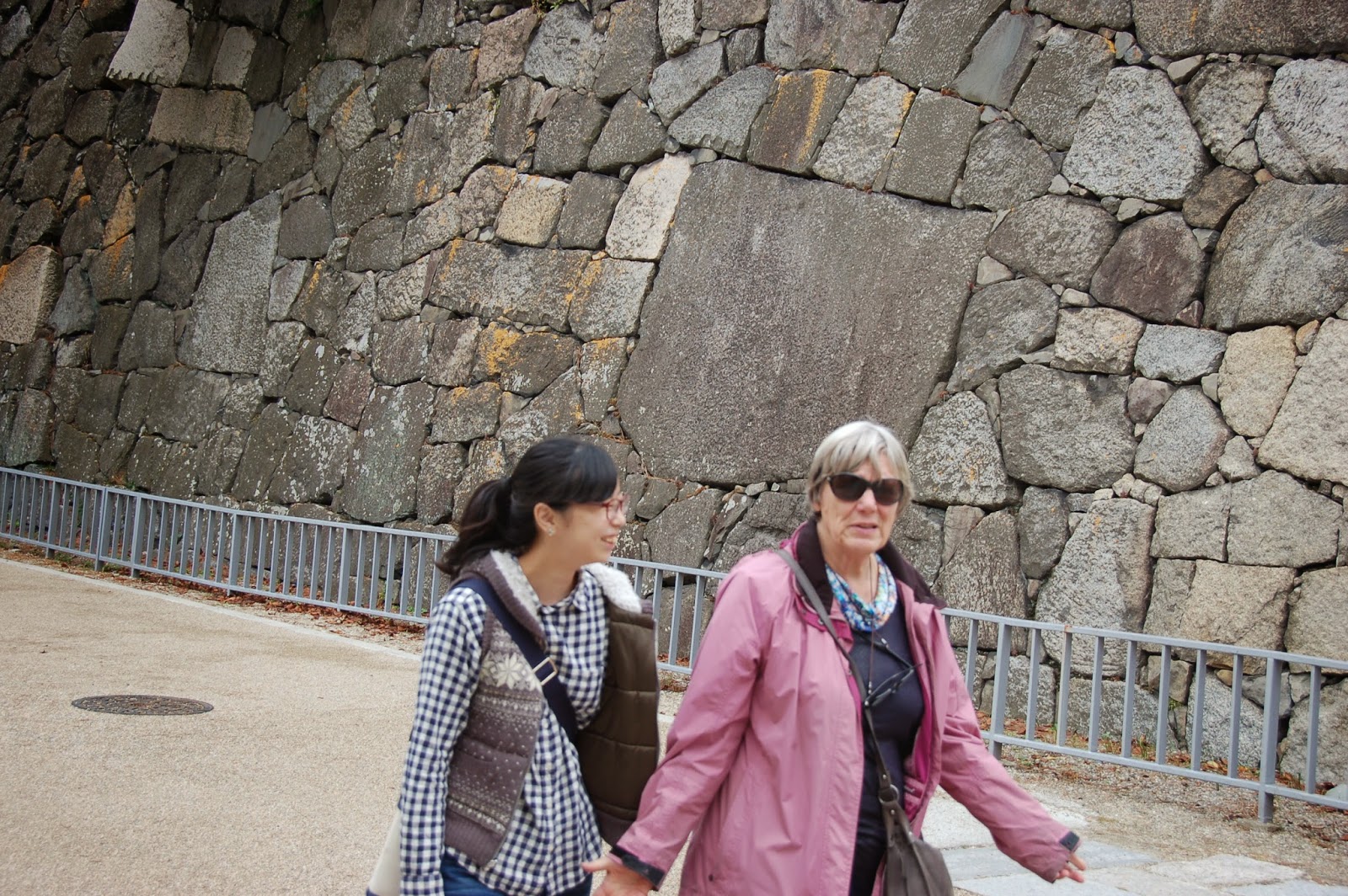 In Tokugawa Museum we were not allowed to make pictures, but first we made a nice walk through its beautiful garden. Koi fishes are here for children what given bread to ducks is for children in the Netherlands. It is different walking with Indonesians or Japanese: here sportive and young Aoi walked quite fast in the extensive garden and we had to walk as if it was a good physical exercise! Tokugawa museum had much traditional art, manuscripts, calligraphy and weaving. 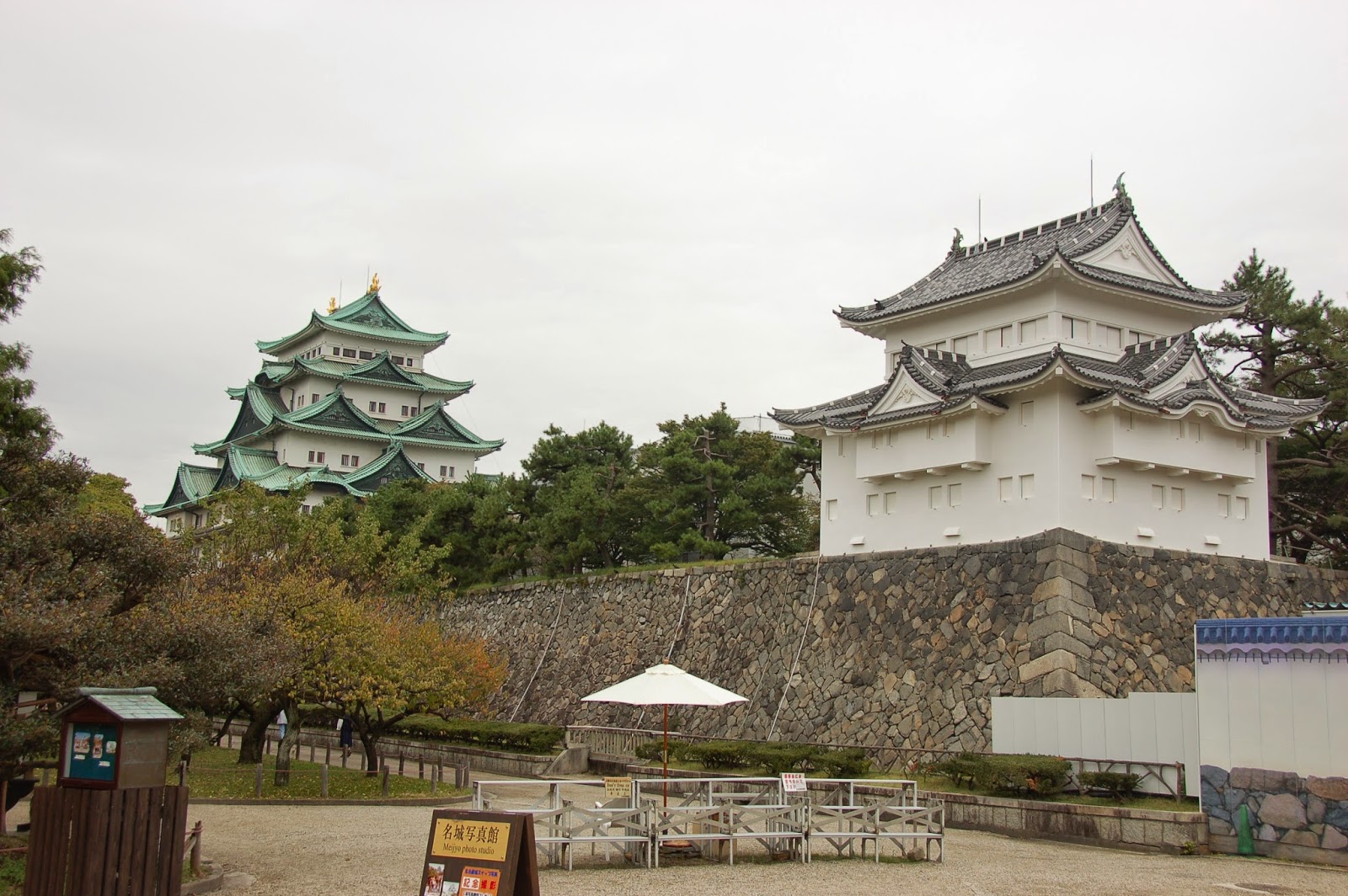 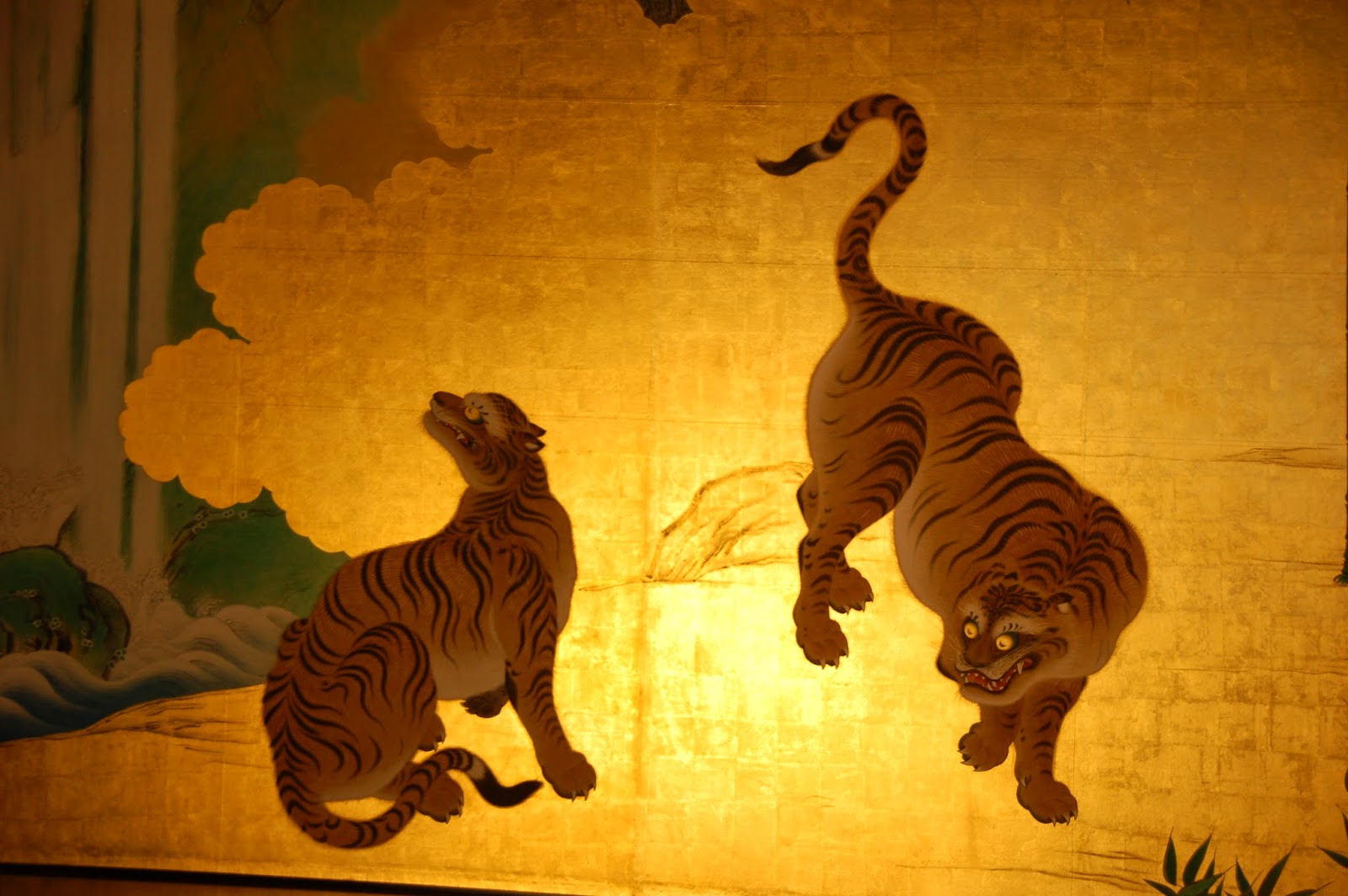 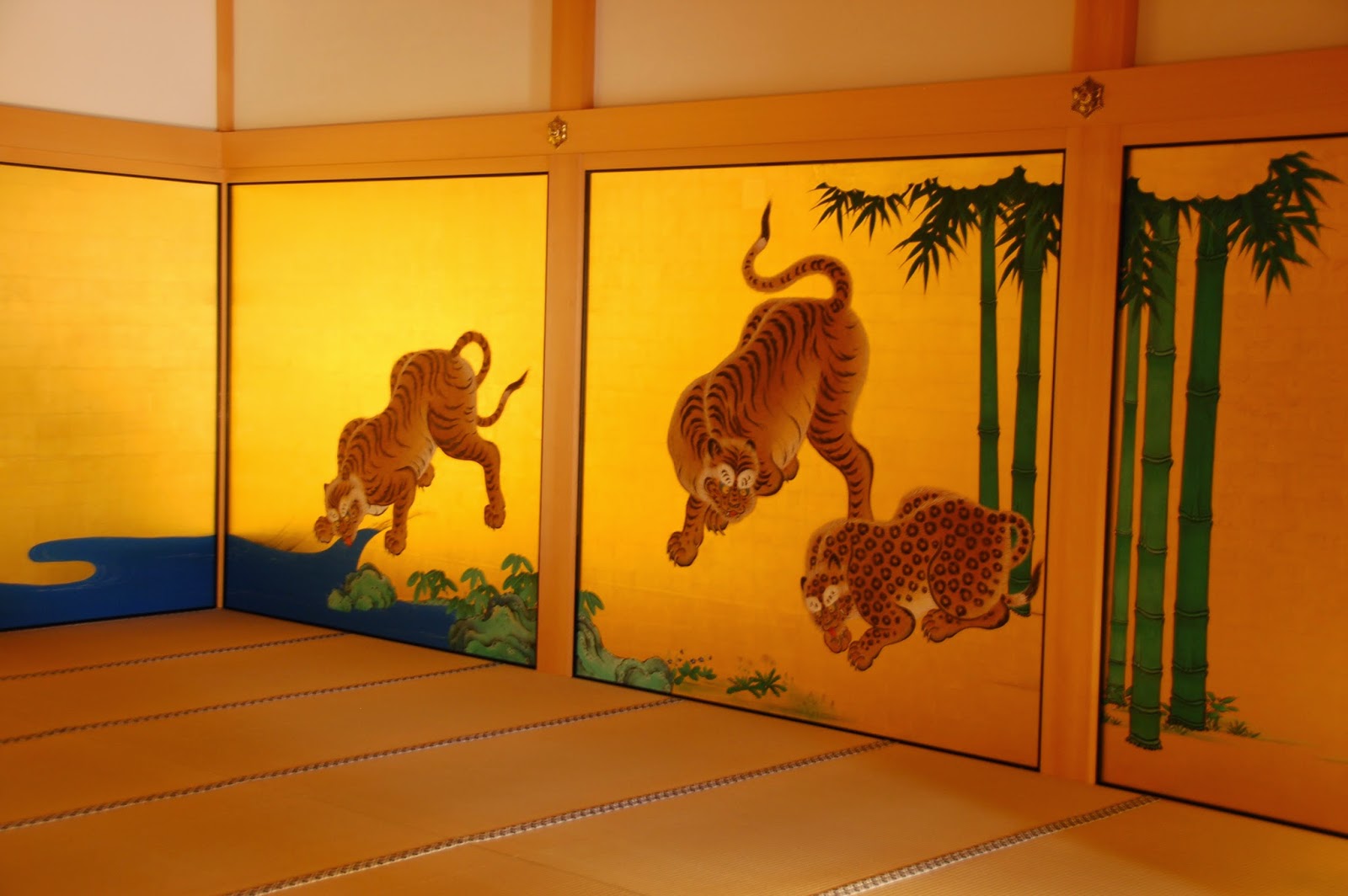 Nagoya Castle and the great palace of the Tokugawa governor, next to its were destroyed by bombs and fire during the Pacific War. The Castle has been fully rebuilt. Also the palace is now under reconstruction and the entrance is entirely new, wood with nice paintings of the same style as in the Kyoto Shogun Palace, but here in a more dramatic and realistic way, with light behind it. It was so new that one doubt whether this is a repetition of classical art or rather modern kitsch: probably it looks more like kitsch when it is too perfect. Some decay gives an extra touch of beauty and we have to wait for several generations before this will happen here as well. 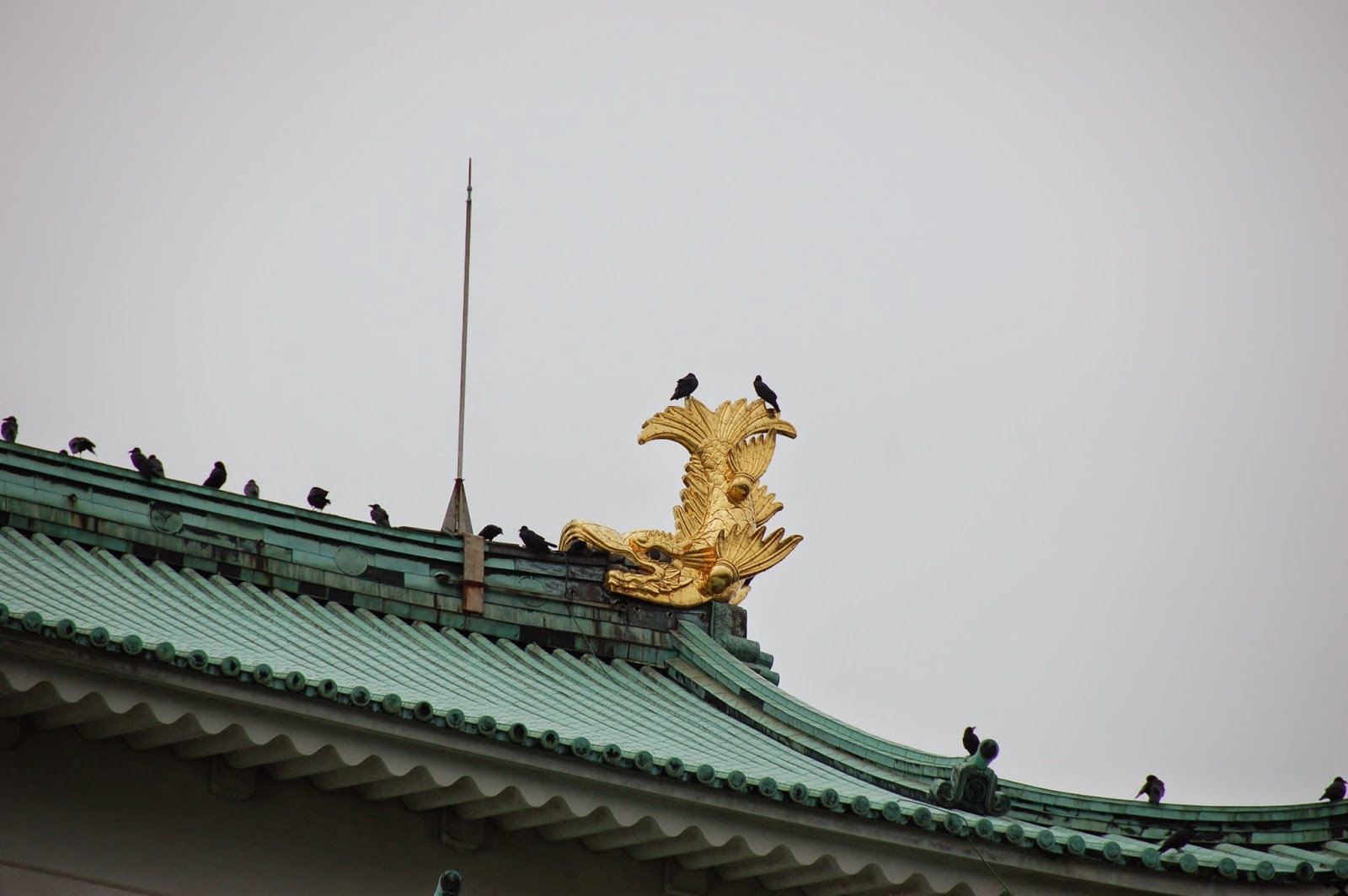 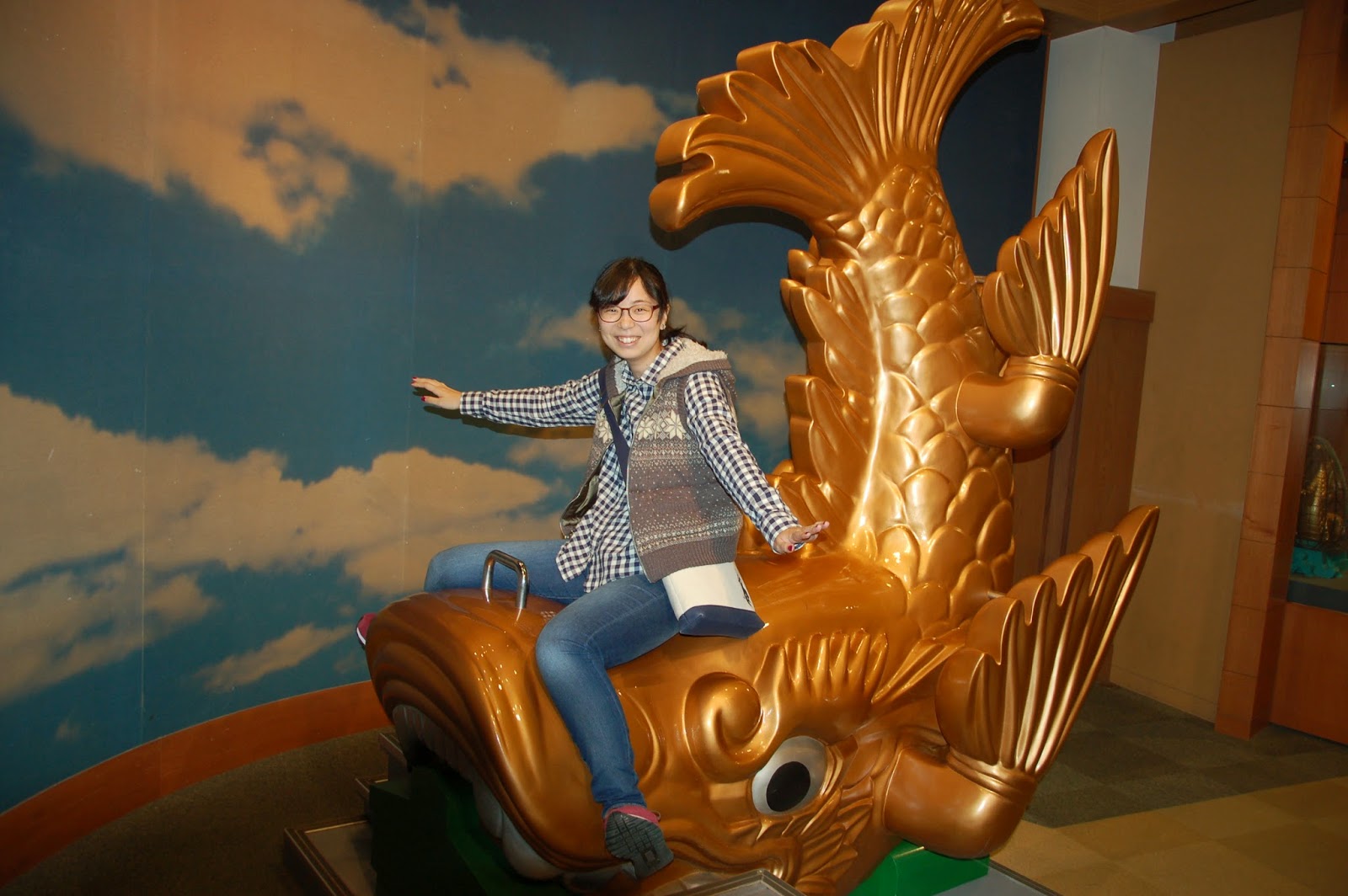 On top of Nagoya Castle there are two delphins, gold plated. In the castle itself there are copies, some goldplated as well, but this platic one has been made for photographing and Aoi enjoyed the opportunity. 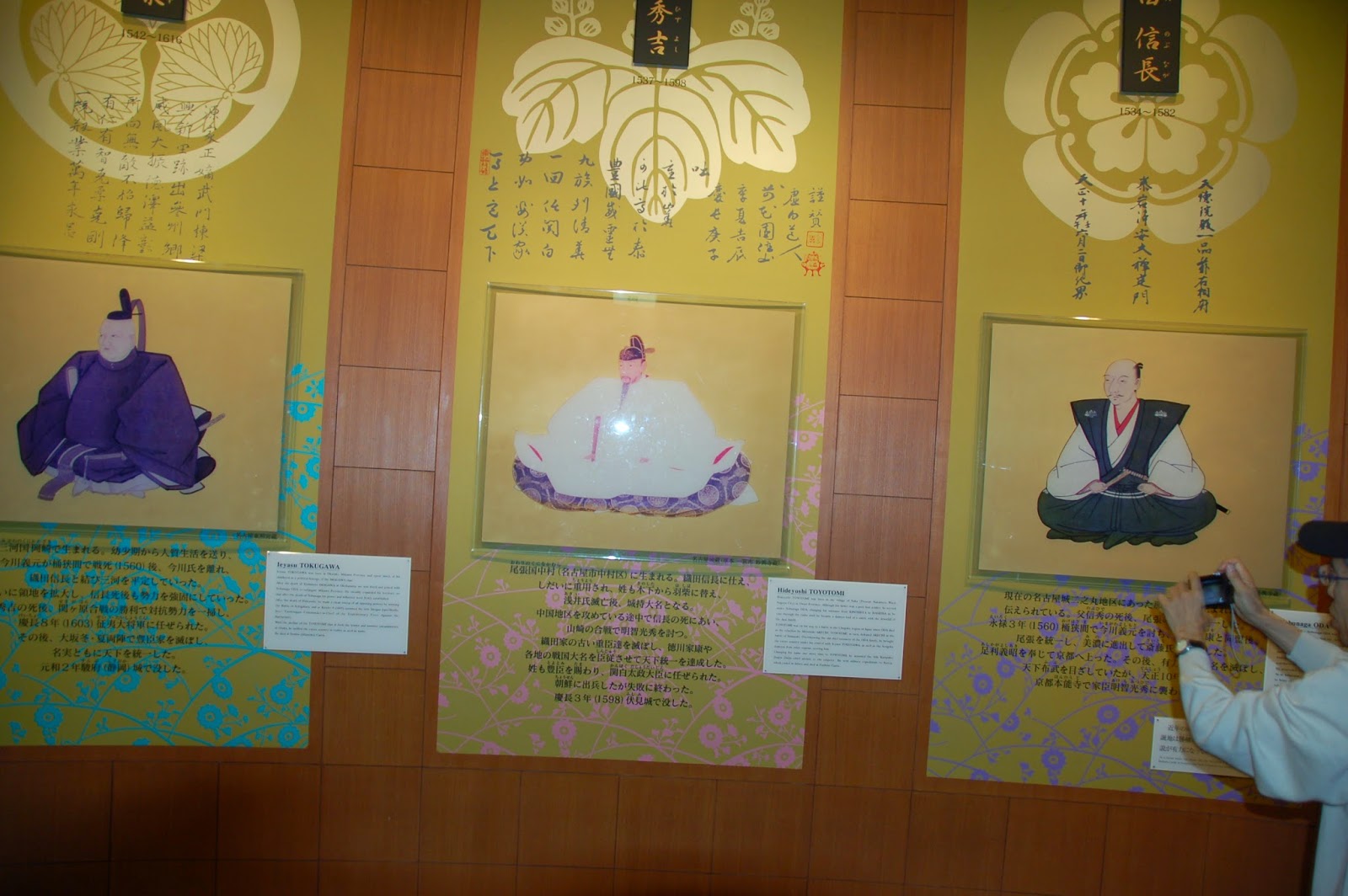 The three founders of the Edo emjpire and the Tokugawa dynasty are honoured here as the founders of a united Japan, between 1568-1630: Oda Nobunaga, Toyotomi Hideyoshi and Tokugawa Yeyasu. Their lives are full with battles, suicides and killing of many enemies, but are showed here as meditating heroes. 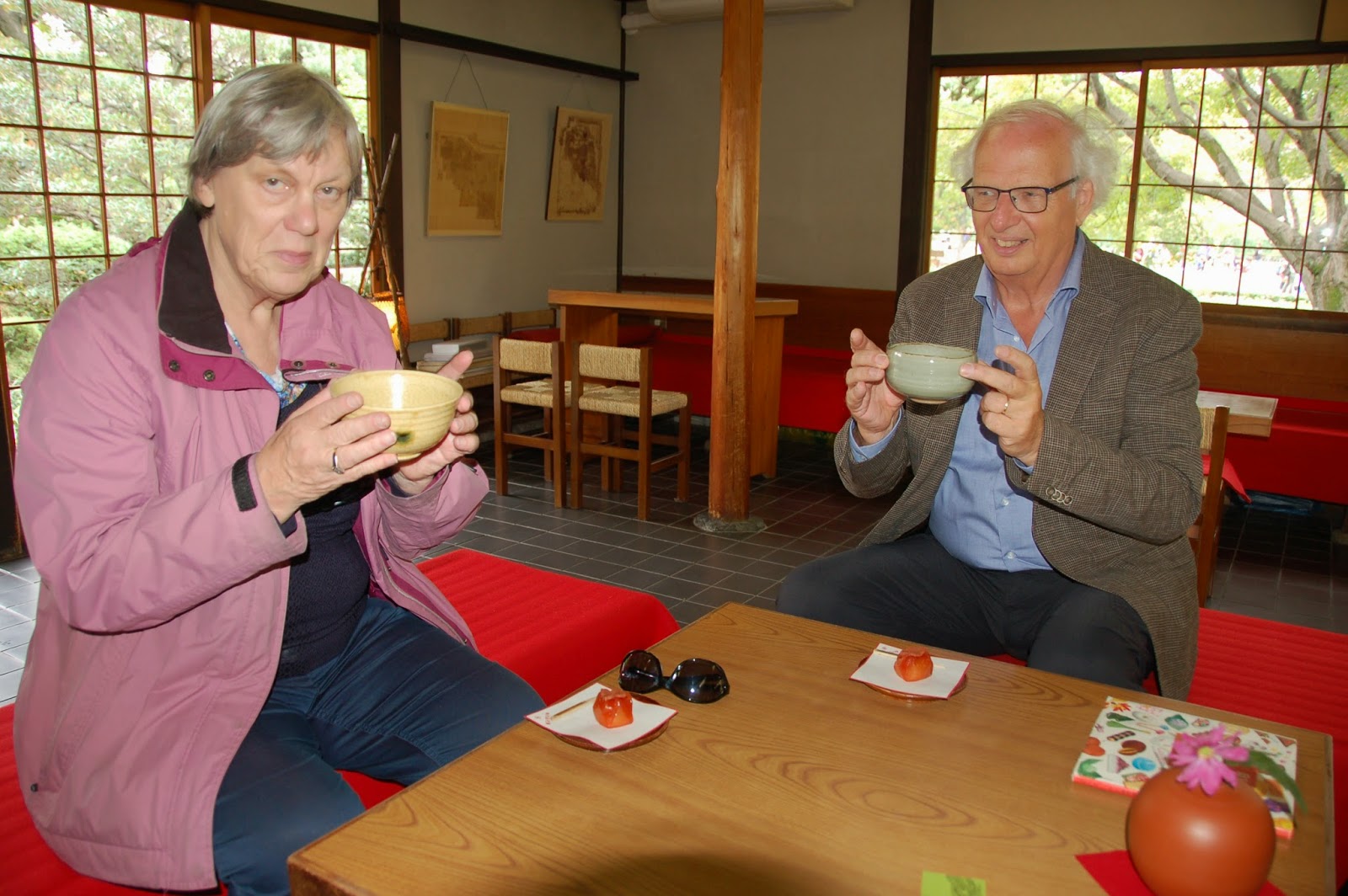 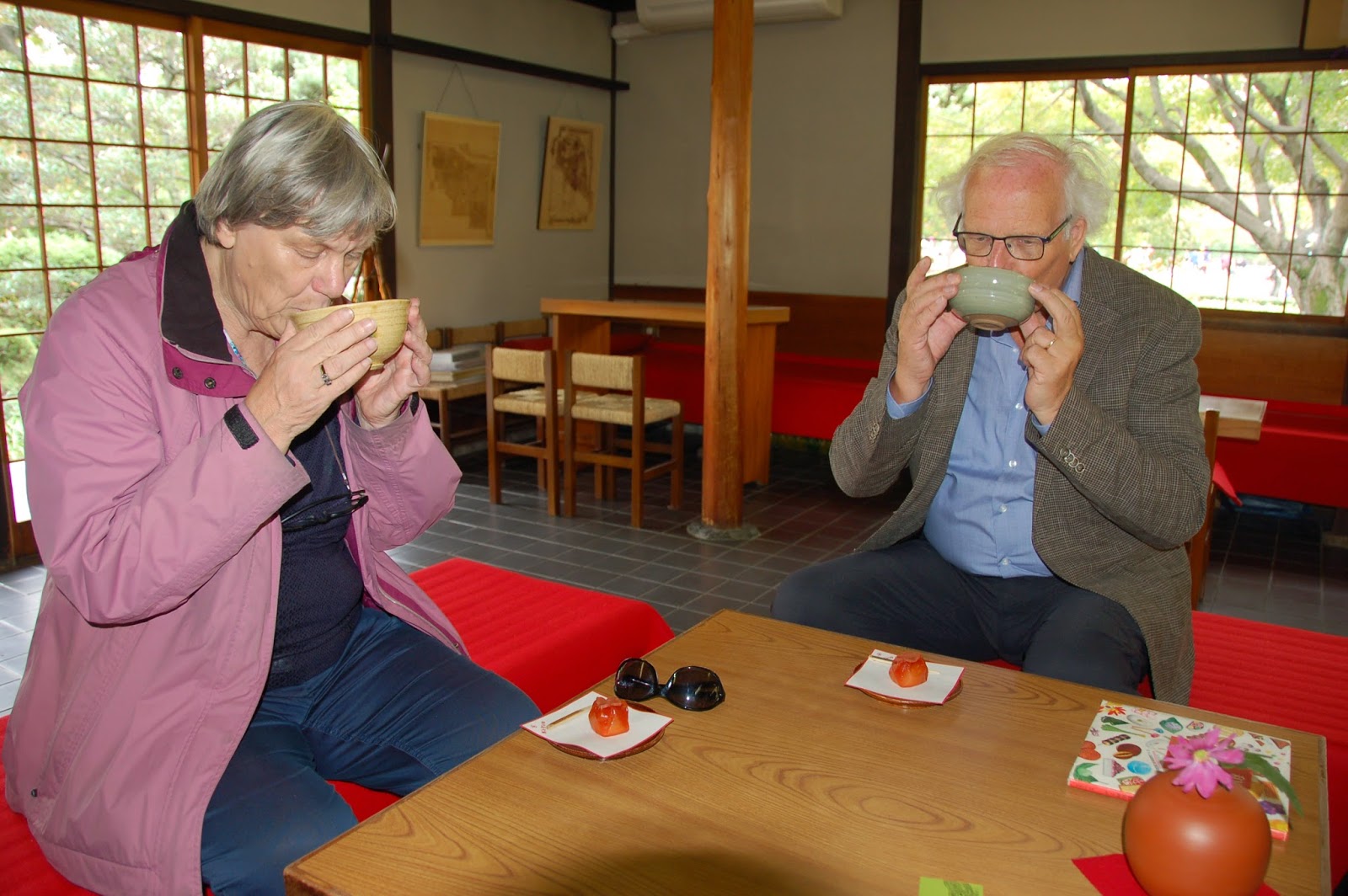 Aoi had nice stories about her family. Her grandfather was a master in tea ceremonies and she brought us also to a tea house next to Nagoya castle and showed us how to drink tea in a ceremonial way. It lasts about 30 minutes, must be done in a somewhat meditative rest, but not silent: one may talk and enjoy the environment. There is a special place to pour the water on the fire: it makes some noise and is seen as some kind of musical instrument, a water organ. Everything must be done in three: turning in the water, mixing tea powder with water three times. One drinks the cup in three times as well. In the room there should be a decoration of one flower only: in der Beschränkung zeigt sich der Meister is the German  expression, but the real masters in imitations are the Japanese! 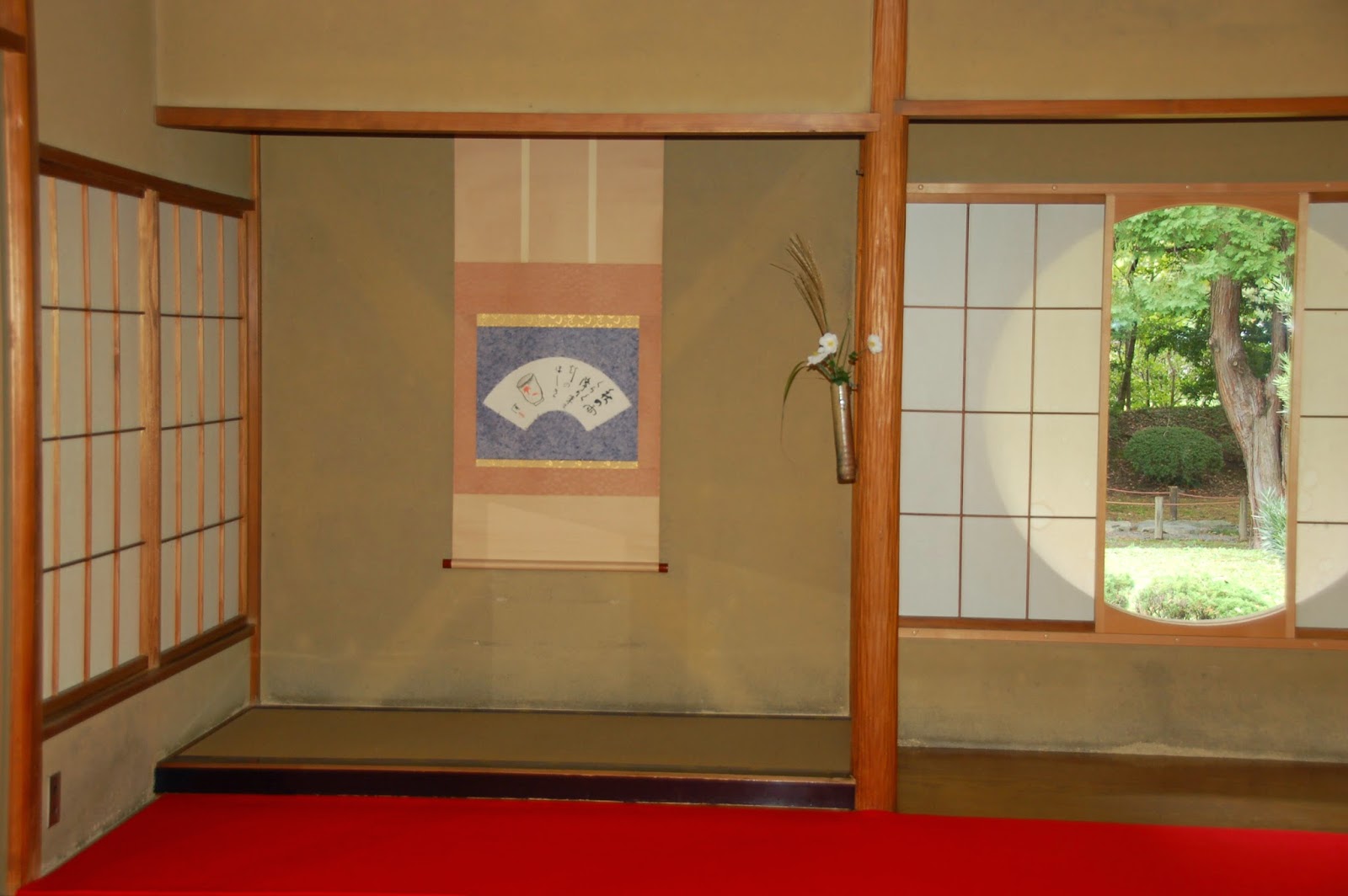 I have no pictures of the afternoon sessions at Nanzan University, where Yasuko was also quite busy with students: she wants to be good in research, but gives all attention and energy also to stimulating students and trying to make true scholars of them.
The lecture was about the weak sides of the Indonesian religious policy. Pancasila was initially an instrument to unite Indonesia (Sukarno's nationalism). Under Soehartorule it became an instrument to curb communism. This necessitated the New Order regime to give more place in the administration for religions. The Marriage Law of 1874 that delegated marriage to officials of the Ministry of Religion was a first step to combine religious and political administration. This was later followed by the extension of religious education and leaving it to orthodox representatives of the religions, by the codification of shari'a courts, by efforts to regulate religious harmony, giving more and more influence to religious institutions and not caring for a good separation or religion and politics.
Gepost door Karel Steenbrink op 22:28