For the trip back to Holland/Utrecht I had a flight of 00:15 on Sunday 15 April, and so still a day extra to do some sightseeing in Hong Kong. From the hotel on the campus of CUHK (and metrostation University) I could use an Octopus card for senior people. This would only cost HK$ 2.00 per trip. Also the ferry from Kowloon and the buses were available for this fare, because I am an 'elder', over 65 years.
I went  in the morning by metro to Kowloon and made the walk to and along the beach, Salisbury Rd. Hong Kong is a marvellous town to walk: not too hot and at all very busy places it is either without cars or there are walking promenades some 5 metre above car/street level. 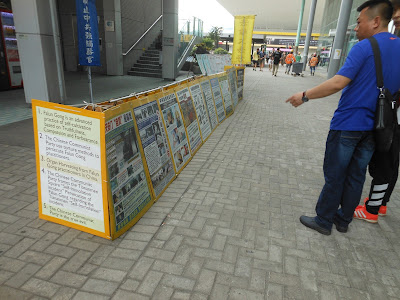 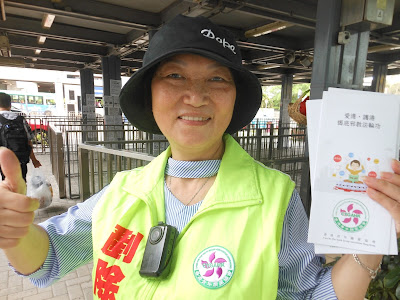 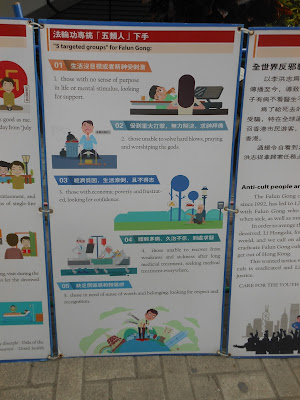 A first encounter, after leaving the metro, was a quite serious of posters about Falun Gong, the spiritual movement, now so persecuted in China. It was quite disturbing to see first that the left series only was full of praise for the movement: Falun Gong is an advanced practice of self-cultivation based on Truthfulness, Compassion and Forbearance. ...  5. The Chinese Communist Party is the true evil. But  a few steps further on there were several series against the 'sect': those who were members of the sect were called 'losers',  people with no goal in life, no friends, no self-confidence. The 'self-immolation' of the young man crushed by a tank on Tiananmen-square was a 'crazy act' of someone who had no perspective in life..  The lady who stand side by side with the posters gave me a pamphlet, in English, but she apologised that her English was not good enough for a real debate about the strange combination of support and attack as seen here. It became clear to me that she was a strong opponent (or paid to give a demonstration against the movement).
The warnings in the guidebook about many people trying to sell something, even to rob simple tourists, proved to be not yet needed on this rather quiet Saturday morning. 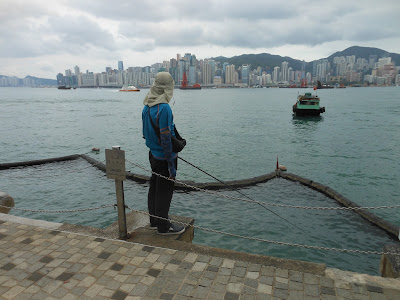 I saw just one man fishing in the Victoria harbour of Kowloon, with a view on the skyline of Hong Kong island
After a walk through the busy streets along the southern beach of Kowloon I arrived at the Museum of Art, now closed due to restoration and expansion. With the Star Ferry I went to Hong Kong Island, quite busy but easy for walking people. After one kilometre the road goes up the hills and here is an escalator in many sections, bringing you easily to the higher levels of the island. 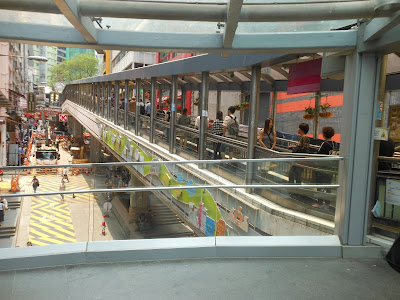 More than half way going up with the escalator, I went left to see one of the five mosques of Hong Kong: the oldest is this Jamia Mosque on Shelley street, built in Malaysian/Arab style, with a nice minaret. [Three other mosques in Hong Kong island are the Stanley Mosque, near the southern Stanley Prison, because the guards in the prison were Indian soldiers; this mosque is built in the style of North India, with a large open square inside and a very small covered area; the second other is on the East Coast of Hong Kong island, Cape Collinson; the third is Masjid Ammar on Oi Kwan Road, in the real centre of the town; there is one mosque in Kowloon, quite close to the beach]. 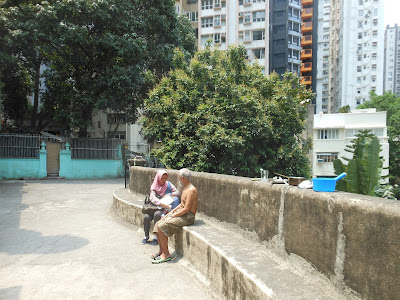 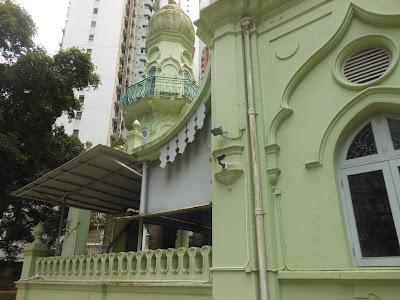 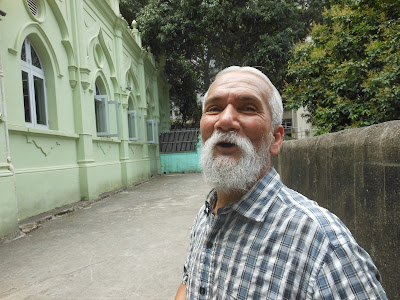 Arriving at the Jamia mosque I saw one Mr. Khan, bare breast, talking with a lady looking like a Malaysian Muslima, neatly veiled. The man proved to be the son of a migrant from Peshawar (Pakistan, near the border with Afghanistan) and a Chinese lady, living close to the mosque. He later went to the mosque to collect a number of booklets for me, and probably was warned by another lady that he should be properly dressed, entering the mosque and talking with a stranger. According to his sources there are some 80.000 Muslim in Hong Kong. He was quite proud to tell that the Jamia Mosque is part of the Financial Assistance for Maintenance Scheme for Declared Monuments in Hong Kong and gave me a booklet about this programme. Also Buddhist tempels, as well as Christian churches are part of this programme.
I had also a chat with a visitor from Kuala Lumpur, Malaysia, who was for some time in Hong Kong: my Indonesian was clear enough for this Malay Muslim. The Christians are more numerous and definitely more visible than Muslims in this part of China.
Finally I took the cable car to Peak, the highest section of Hong Kong island. After waiting nearly for more than one hour I could see the entertainment buildings found here, as well as the old colonial mansions on his green part of the island. 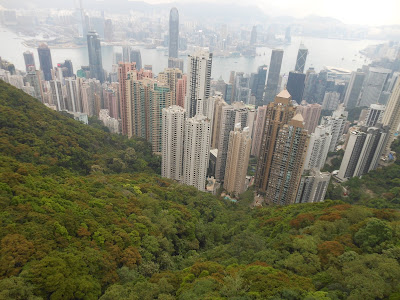