In the Dutch translation of the well-known book by Yuval Noah Harari, Homo Deus, the philosopher Bas Heijne writes that human beings like to cooperate with others 'but in small units'. This is also the case in religions: even small congregations are divided in smaller circles and these smaller groups define themselves often by mentioning negative qualities of 'others'. The history of religion, like that of other human activities, is full with schisms, problems of groups that do not like other groups. In the ecumenical movement, however, divisions are always qualified as very negative elements that should be removed. It is a pity for those devoted to the ecumenical movement, that the ideals have remained remote, not easy or absolutely never to be implemented.
But this morning we saw reports of ecumenical results in Hong Kong that were brought more enthousiastically than I have ever seen since years. Ms Theresa Lumo Kung of the Ecumenical Commission of the diocese of Hong Kong gave a nice presentation of ongoing activities. One was a trip to Rome, where the ecumenical group of Hong Kong could meet Pope Francis. 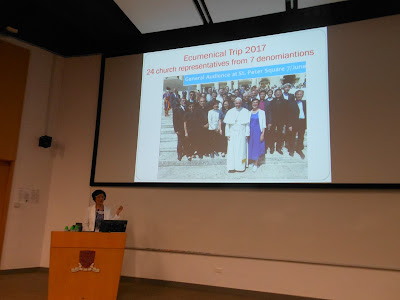 Another introductory talk in the well equipped modern styled hall of CUHK (a conference place to be found everywhere in the modern world), was by Dr. TONG Wing-sze, the director of the Tao Fing Shan Christian Centren where we came together the following day. In her own place, full with Chinese Christian Art and built in that style, she also showed a cross with some elements of Chinese culture. But here below she is at the walk after lunch in the open air at the pond surrounding the great banyan tree with a view on the sea below. That was an attractive part of the agenda: a walk before or after lunch to see more of the location where we gathered. 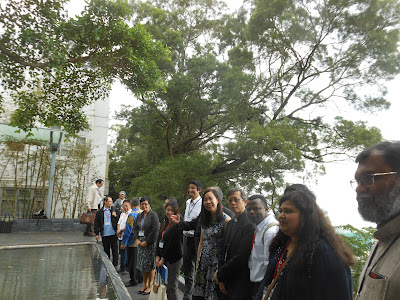 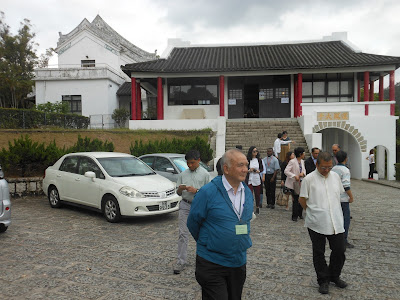 Besides the Lutheran Dr. TONG, it was the diocesan Hong Kong priest, Prof. HA who was the leader of the conference. This gentle leader of the Catholic Research Centre in the CUHK is here above with the blue jacket at the place of the second day: the nice Christian Centre, built in Chinese style on a mountain top.
I will here give only some salient points in the lectures and the debates. Prof. PAI Lan Shiu made reference to Martin Luther (because the conference was also held in commemoration of the beginning of the division caused by the reformation of 1517. He gave an analysis of Luther's view of the difference between divine and human love, in contrast to Thomas Aquinas. PAI sided here with Aquinas who did not define man immediately as sinner and distinct from God. In his argument he compared Mahayana Buddhism with Christianity for its non-duality, where human nature has simultaneously the characteristics of divine nature. Jesus is for him to be compared to a boddhisattva, 'a person with supreme wisdom and infinite compassion, especially the self-sacrifical love towards all sentient beings'.  Aswin Fernandis from Kerala, India, the only (Syrian) Orthodox among the 25 people invited for the conference, was very glad to hear this: in ecumenical talk the orthodox are often forgotten, or seen as too much looking to their old theological themes.
After some more general theological debates, the transition from Western Mission to local Churches became the topic. In China and India local church leaders wanted a united (Protestant) church as successor to the many denominational missionaries, but their results were rather poor.
A strong paper was given by Dr. Lisette Pearl Tapi from the Philippines, who blamed the political leaders of her country that they, one after the other had no attention for the suffering of the poor. This made Jan Aritonang to make the remark: 'What is the profit of adhering our religion, if it has no impact in society?' 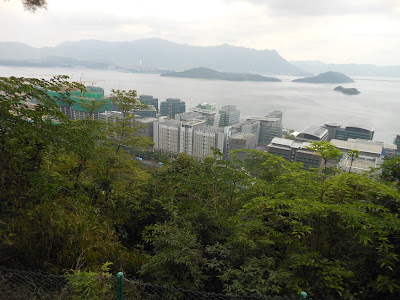 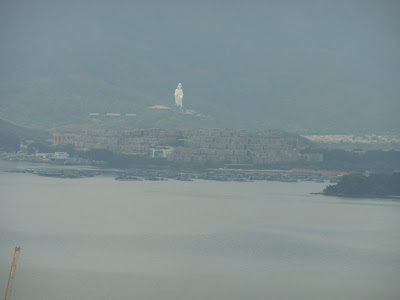 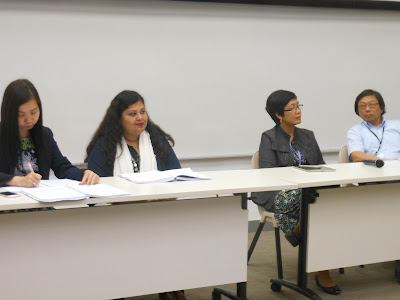 The two pictures above show again a view during our lunch walk, while below Dr. Tapia is sitting second from left. On the picture in the middle a giant picture of Kwan Ying, the female 'deity' of Mahayana Chinese Buddhism is shown.
During the lunch walk we also visited shortly the ecumenical faculty of theology, where staff from seven Protestant denominations train some 300 students (partly also from Vietnam, mainland China and even Malaysia, in English and Chinese). The ecumenical movement has nearly impossible ideals and no easy or even realistic way can be given to reach that goal. Contact with the reality in such country is rather the goal of such a conference than a road map towards full unity.
Gepost door Karel Steenbrink op 07:26