Last week I was during four days in Hong Kong for the international conference on The Asian Ecumenical Movement.  It was convened by the Catholic Study Centre at the Chinese University of Hong Kong (CUHK). I arrived very early, 06:00 at the airport and so I had the opportunity to do some sightseeing the first day, before the opening dinner.
I took the bus from the airport to the station of Sha Tin, heart of the so-called New Territories, highrise buildings along a canal in the midst of a valley, surrounded by green hills. From the station I had to ask several times for the entrance to the temple of the ten thousand Buddhas, which was quite difficult to find, around a corner past the giant building of the town hall of Sha Tin. 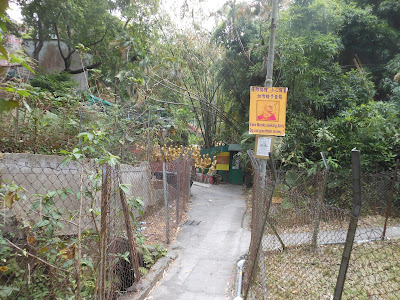 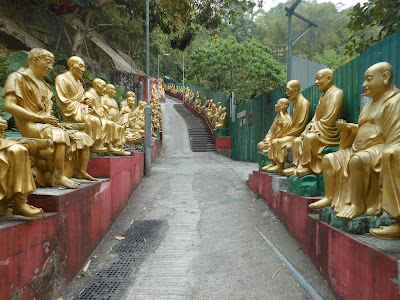 The lousy entrance gives first a warning: do not give money to people pretending to be a monk! In fact I saw no monks at all! Just a few tourists, some women coming for their devotion and even few families with small children and a handful of cleaners, mostly women, who also took care of the numerous incense sticks to be burnt there (just like the many candles in Lourdes and Fatima: also for those who are absent).
The monastery was initiated in 1949 by monk Yuet Kai (1883-1965), musician, poet, who had come to Hong Kong in 1933. Building activity still goes on, but the main construction was finished in 1957 with the main temple, where on long shelves 12.888 small statues of the Buddha are stored, about 20 cm high. It is not allowed to make pictures inside and so I cannot show these. 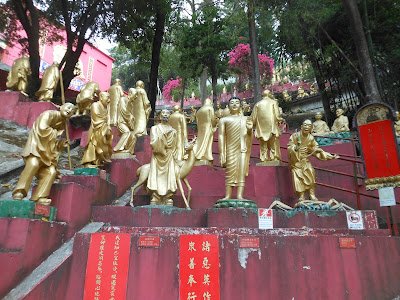 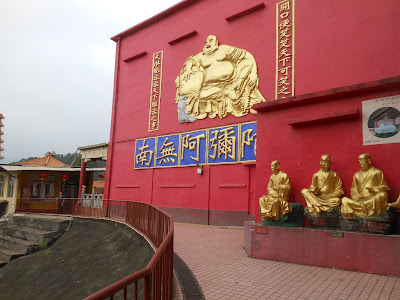 There are some 450 steps leading to the central platform, where the central temple is also located. Close to this platform the road is divided in several ways leading to this place and here we see for the first time a statue of the Buddha. For the rest it is a row of very funny statues of sitting or standing monks in all kind of realistic posures. There is also a variety of black bearded monks, some with crowly hair looking like Roman senators. The statues are made of plaster and some figures are present in five or more identical copies. On the whole it is a superb view and the most exciting entrance to a place of pilgrimage I ever had seen. 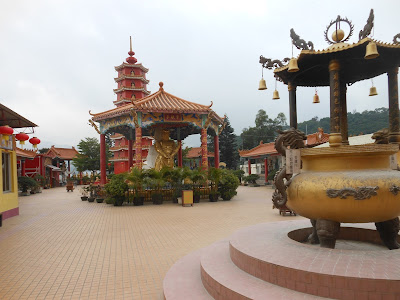 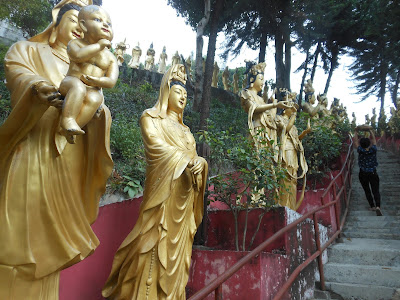 On the central platform there are, besides the main temple with the 12.800 identical small statues of the Buddha (besides quite a few larger ones and many other items, a big hall with lovely gold-red richness and splendour. The grave of the founder is here also, just in front of a major Buddhas statue), there is a well-pagoda, to be seen from far. Rows of arhat and boddhisattva.
From this central platform a new road leads to an even higher place. the access to this higher platform is surrounded by statues of ladies, some looking like ordinary (but rich) mothers, others perhaps deities. I guess that this is a road to be taken by women who want to become pregnant. One lady moved upward, often backward walking, with her bad over her head. She came down, then walked up again, looking very serious, because praying is a serious thing! 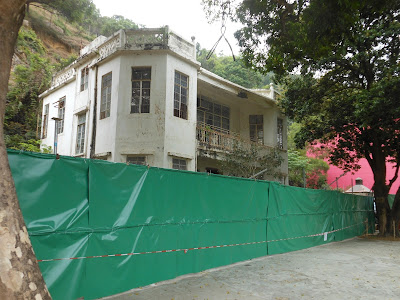 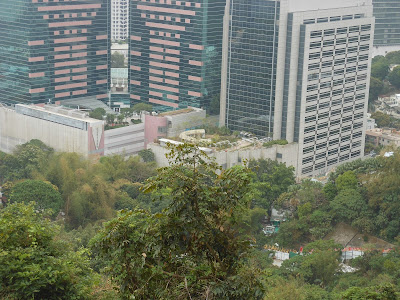 On the top of the place of pilgrimage/monastery there is a great mansion in colonial style. It was probably the house of the first rich Chinese donator to the place who supported the monk in building here this impressive Buddhist place. Below we see the big town hall of Sha Tin. On the bottom of the picture, below right, the beginning of the steep walk to the temple can be seen: it is all a testimony of the development of Hong Kong in the last century. It was a surprising, somewhat weary but rewarding beginning of a nice journey.
Gepost door Karel Steenbrink op 22:13