On the second day of the conference The Asian Ecumenical Movement, we came together in a marvellous place: Tao Fong Shan Christian Centre located on a hill, 500 high above the centre of the New Territories. The centre claims that it is only a 20 minutes walk from Sha Tin railway/metro station (on the same chain of hills as the Temple of the Ten Thousand Buddhas of day 1). It is in the middle of a nice green area. The centre was initiated by the Lutheran Mission from Norway and designed by a Danish architect in the early 1930s. It is now part of the cultural heritage of Hong Kong and (like the mosque which I visited on day 4) receives some government subsidies for maintenance and restauration. 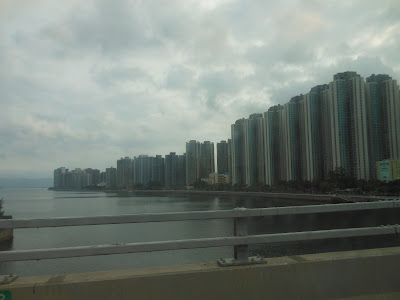 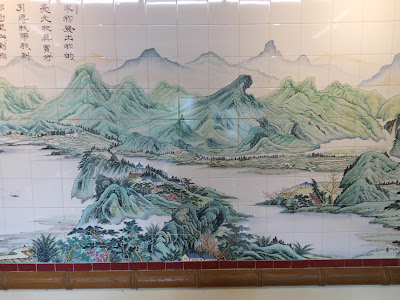 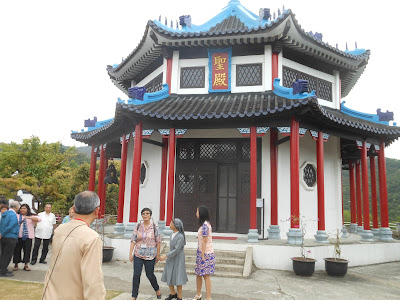 Three pictures here: on top (taken from the bus toward the place) first the small piece of land between hills and the South China Sea, full with highrise building. Then the idealised location of the Christian centre on tiles: just one small chapel in Chinese style, below the actual centre.  It is called in English Christ Temple. Like traditional Chinese compounds it is a series of rather modest, small buildings. There is a conference room, enough for some 40 people, a Centre for Chinese Culture, facilities to stay for some 20 guests, dining room, library. And, of course this nice chapel with the radiant red pillars. 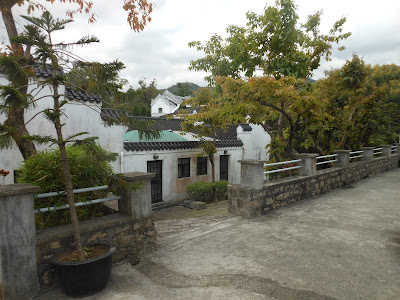 In Muslim-Christian relations there is a common formulation about the conflict between 'Islam and the West' where the religion of Islam is in contrast to a society, political power, culture. In this case people talk about the Christian religion and Chinese culture. In all debates it is clear that Ecumenism is not only about the unity of all Christians, but even more often about the place of Christians amongst other societies and cultures, usually as tiny minorities.
This started with a nice presentation of probably the tallest member of the conference, the Japanese Lutheran Dr. Arata Miyamoto. He held a positive story about the Catholic participation in the anniversary of 500 years Lutheran Reformation in the Catholic Cathedral of Nagasaki.
After his talk Dr. Jan Aritonang from Indonesia came with his burning question. The very small Protestant Church in Bali owns a nice hotel with a chapel in Kuta, near the airport. It is often used by Japanese couples for their marriage ceremony. These couples are not Christian, but like to marry in a 'Christian style' with Western style clothes, readings and songs about love. Myamoto agreed that 60% of Japanese marriages are celebrated this way: bigger hotels provide such facilities. When possible the couples even like a true chapel and a true minister and are willing to pay for it. Miyamoto did not defend the practice: is it a matter of money for the church and the minister? Or even some kind of propaganda for Christian religion? 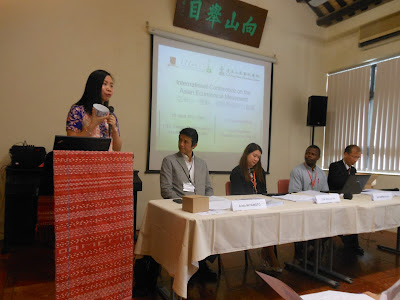 Dr. TONG Wing-sze is here presenting the rice bowl of the centre, with the Nestorian Cross on the bottom (the cross seen as growing from a lotus tree). Left of her Dr. Miyamoto. In the centre LUK Chi-lan Iris, a PhD student writing a dissertation about the British Anglican Ronald Owen (bishop of Hong Kong between 1930-1968), who lived not in the bishops' house in downtown Hong Kong, on the HK Island, but in the Christian Centre on the hills in the new territories. Second from right is the Congolese Dr. Batairwa who works already 17 years in Taiwan and gave an historical overview of the transition of missionary societies to Taiwanese independent churches: not united, although efforts were made for it. There is a Council of Churches in Taiwan, where also the Roman Catholics are member. Also here 'the Taizé prayer is an engine fostering ecumenism in Taiwan.' 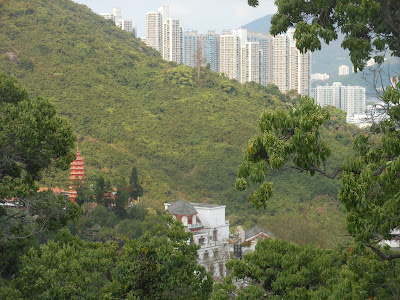 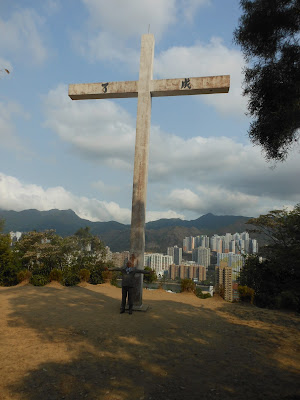 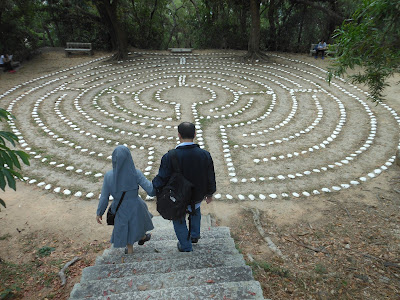 We had also here the walk through part of the large compound before and after lunch. Above is the view to the north, where the pagoda of the Temple of the Ten Thousand Buddhas can be seen. There is a very large cross (with me standing below, so the cross will be about 10 metre high). Below is a labyrinth as a way of meditation. Just follow the only possible direction after access and you will come to the central circle.
There were more local presentations. My talk was about Indonesia where the government has made the adherence or at least some kind of registered membership of a world religion (six possibilities only!) as an asbolute requirement and where interreligious relations are more prominent in the cultural debate than the intra-Christian unity. Not the final goal of unity, but first of all the prevention of conflicts is in Indonesia the goal of these debates and official laws and rulings.
Aswin Fernandis from the Orthodox Malankara Syrian Church talked about the long history of his church from amidst Hinduism (more or less seen as a rather high Hindu cast of traders) and amidst the arrival of Christians from Portugal, Britain and many other countries. How his church retains its own Indian character.
John Roxborough from new Zealand, talking about Malaysia and Singapore has the story of the Asian Council of Churches, renamed Asian Conference of Churches, CCA and from 1965-1988 located in Singapore. In line with the dominant discourse of the time (liberation theology, strongly in favour of human rights, democracy), it had troubles with the government of Singapore and moved to Hong Kong, while now it is located in Thailand, Cheng Mai.
He saw a new blossoming of local councils of churches in Malaysia and Singapore, after they were no longer dominated by liberal church leaders, mostly expats/missionaries from Western countries, but now supervised by more evangelical local leaders who refrained from interference in politics.
All in all, the conference talked about some high ideals, beginning in 1910 with the World Missionary Conference of Edinburgh, wanting 'the world for Christ in this generation' and then possibly a united Christianity. We came here to talk about the reality of the tiny and divided minorities of Christians in this region of the world (with the Philippines as dominant Christian an exception, but not really a radiant example). 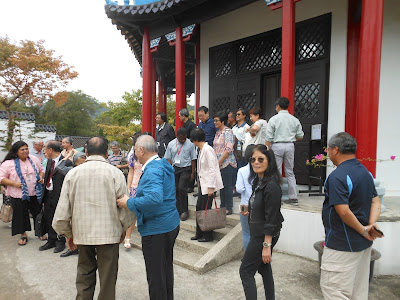 So we had the closing session: sometimes wiser, better informed, always somewhat sad. With the exception of two participants they were all new and inspiring people for me. Thank you Jackie Foo for organizing it in such a smooth way!
Gepost door Karel Steenbrink op 22:15