Hong Kong, day 1b: a museum and a temple in the valley of birds and flat buildings

The temple of the ten thousand Buddhas was my first and most important goal for a day in Hong Kong. Second stop was the Heritage Museum. It is a very big modern building, not a collection of smaller units as the Buddha temple (and in fact most older traditional buildings like palaces), but one solid structure, opened in 2000. It has a warm heart for minimal art: empty spaces, even the first exhibitions of landscapes on porcelain: just a fragment of a tree, a few birds, imagenary of a mountain. 'Chinese people are reserved, they do not like the tumultuous expression of emotions as found with American Evangelicals,' was later this week said at the conference.
The central valley of the new territories has now a very strict controlled canal, nice birds, a museum here, close to the old Che Kung Temple. 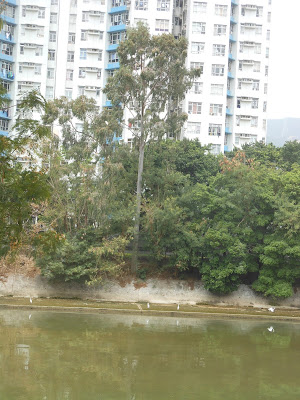 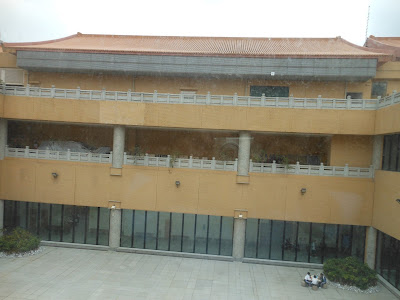 Look at the birds along the canal! They also adapted to the metropolis. The Hong Kong Heritage Museum had the large collection of one Dr. T.T. Tsui on Chinese classical art, a theatre rebuilt in the style of the Cantonese opera and a large movie theatre where fragments of the Cantonese entertainment was shown in movies from the 1960s and 1970s, a full wing dedicated to Bruse Lee, filmstar in Kung Fu movies. I saw very few things or pictures from the British colonial period.
Nearby is the Che Kung Temple, big, busy, where piety and business seem to go hand in hand. 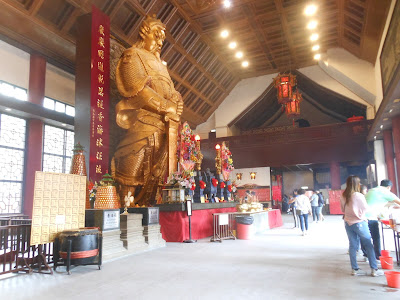 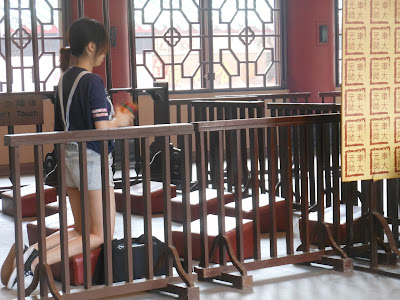 In front of a statue of some heroic and mythic Chinese ancestor people are showing their gifts: incense, flowers and fruits, while below a girl or young woman is moving to select the proper  number for her future destiny. 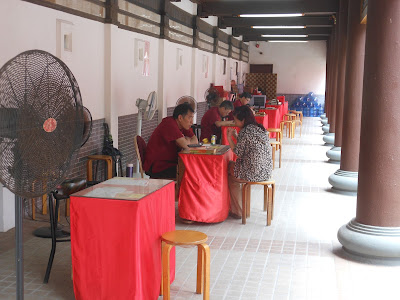 Private consultation possibly: to select a good day or time of a day for special acts? Private talk about individual problems or choice of life? As one who does not speak the language and is just an outsider here, much remains foreign or even strange for a visitor from the Netherlands.
Prof. Theo Sundermeier (Heidelberg, Comparative Religion) has written an interesting article on the differences between religions based/focusing upon 'liberation' (Befreiung) or 'reconciliation' (Versöhnung). Hinduism and Buddhism are, according to this distinction concentrating on liberation from life in this world which is seen as leading to suffering only. Instead, the Jewish Religion (in the Hebrew Bible not accepting an immortal life or 'distinct spirit' for humans, Christianity (and Islam) concentrate on reconciliation with nature, ancestors, other people in our life. It is good to formulate the focus of religion for daily life nowadays asnd not only in some uncertain 'afterlife'.  What I experienced about Buddhism here had not so much to do with extinction of passion and hoping for a Nirvana, or liberation from material things now, instead, also these rituals are very much close to daily needs and concern. 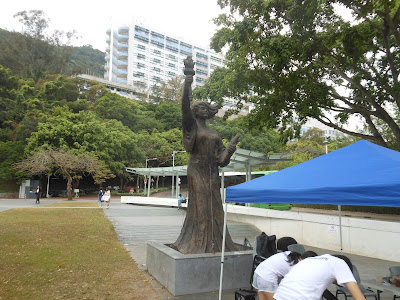 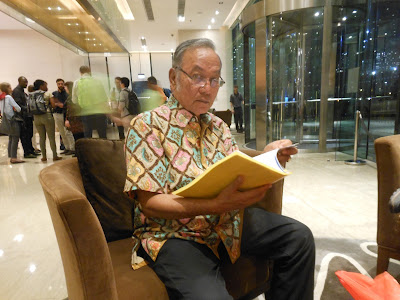 Finally arrival at the campus of the CUHK and at the Hyatt hotel, on campus also. The liberty statue of the symbol of freedom, equality and brotherhood was placed by students in 2010, as protest against the closer association with the Chinese Communist Republic and the loss of special civil rights for Hong Kong citizens. The President of CUHK wanted to remove the statue, fearing the Beijing politicians, but student protests were so strong that he decided to leave the statue where it is now.
Below in the lobby of the Hotel my good old friend and partner in many writings: Prof. Jan Aritonang from Jakarta: selamat datang ke Hong Kong!
Gepost door Karel Steenbrink op 00:12