We had parked our car near the great football stadium of Siena and the first church we saw was the giant Dome on top of a hill, but the first we entered was Santo Dominguo, on the other side of the deep valley. In this church most attention was for nearby born Catharina of Siena (1347-1380). She must be distinguished from the martyr of Alexandria in Egypt, St Catherine who had to marry a pagan officer and rejected the proposal and therefore was killed. 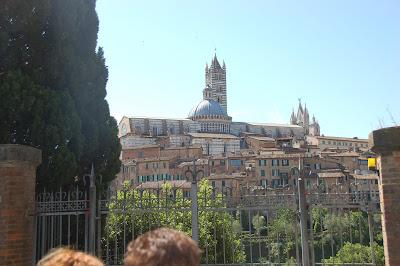 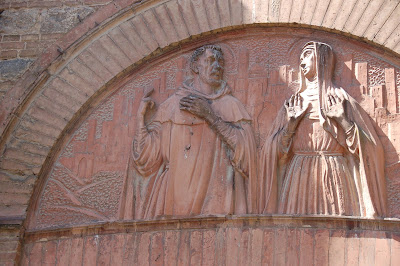 Above the Duomo from the San Domingo. Below here the founder of the Dominican order and Saint Catherine.
Catharina of Siena must have been a very keen young girl. She was one of the 25 children in her house, but had as a young child already religious visions. In the Church of Saint Dominicus her head has been preserved, but we were not allowed to make pictures inside. Loads of buses entered, probably on their first stop to Siena. But also quite a few people looking like more or serious pilgrims. Close to the great church is a compound with the 'original house' of Catherine and some six chapels, where people could have conferences, private meditations. I saw a lady talking to a nun in one of the chapels in a very serious manner. 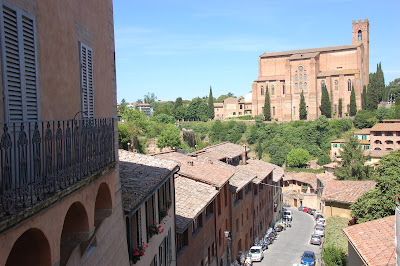 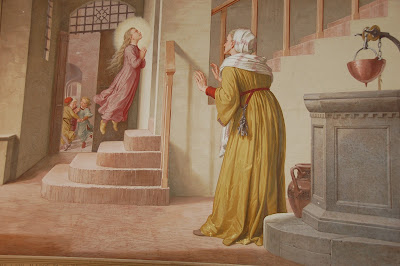 Above Santo Domingo from a distance. Below one of the visions of the young girl Catherine.
In a side room of the great Duomo of Siena the library of the learned  Enea Silvia Piccolomini, the learned citizen of Siena who became Pope Pius II and declared Catherine a saint.
Some 375 letters of Catherine and at least one major mystical is preserved. She has been declared Doctor Ecclesiae (quite recently). She is known for her action to suggests the popes to return to Rome from Avignon. She was less a warrior than Jeanne d'Arc, but must have been a remarkable woman.
Below the scene from the library in the Duomo of Siena where Pius II declared her a saint. 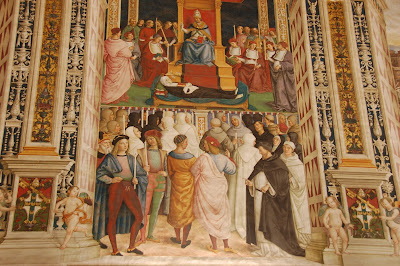