From 15 until 29 May 2015 we made a trip to Italy (Tuscany and Milan) and the region Schwarzwald in South Germany. In Tuscany we visited the major towns of Florence, Pisa, Siena, San Gimignano and Volterra. All different, but important representatives of the early renaissance and still in splendid condition. Churches and palaces for local rulers were and are the most important buildings.
I write under this title because recently I wrote an article for the Indonesian cultural magazine Basis about the hype in western countries to build museums. In the medieval and renaissance period many towns were in competition to build more beautiful, richer and larger churches. Now this has changed into the fever to build museums that attract tourists and are more or less the label for a town and society.
Churches are usually free of entrance fee, but in various places this is now changing: in Pisa and Siena a fee is charged for visits. In London a fee of 20 pound is asked to visit Saint Paul's Cathedral. About € 12.50 is charged for the Sagrada Familia in Barcelona. (E-ticket for € 15.00 'save two hours waiting!). Not only for entrance fee the great churches of Italy (and elsewhere in Europe) resemble museums. In these places many more people come for the sight-seeing than for the church services. In our town of Utrecht every Saturday afternoon a concert is given, either by a solo organ player or a full choir sometimes with orchestra. The conductor of the choir quite often complains that the audience for the concerts is larger than for the church service, where also a good choir sings the music and an extra sermon is given. 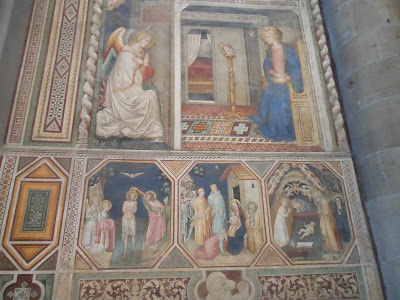 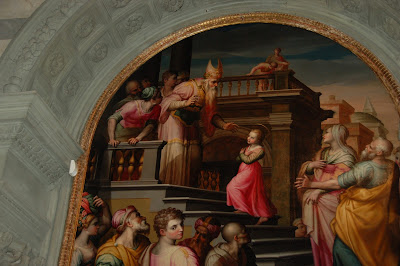 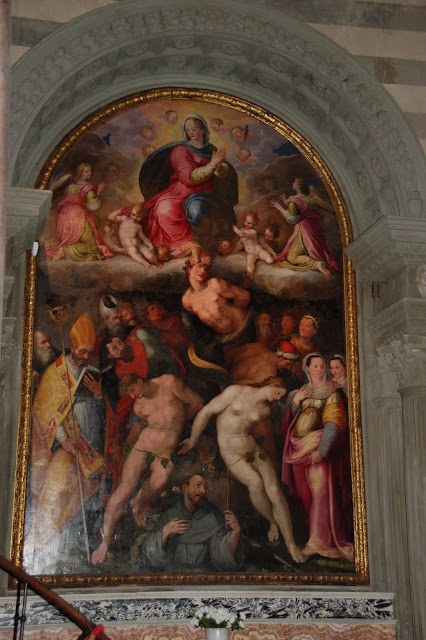 All three images are about Mary who is by far the most popular in the museum-churches of Italy. A rough guess places her even much more present in the paintings than Jesus or any other saint. The first above is a painting, fresco, in Santa Maria Novella, Florence. The Annunciation again is probably the most often item about Mary. In small chapels in the countryside there are also many more images of Mary than Jesus on the cross or just a simple cross. Does it mean that the incarnation is a more important idea about the salvation of mankind? More important than redemption on the cross that is less often represented?
In the centre we see here the presentation of Mary in the temple. It is not from biblical stories, but from apocryphal tradition. So it has also become an important part of the life of Mary according the the Qur'an.
Its is here from the duomo of Volterra, the small town that was the major place for Etruskian archeology. Below is a quite realistic painting from the same church. Above we find Mary who crushes the head of satan, here represented as the snake of paradise, but with a human head. Adam and Eve are not represented here as the modest or even shy figures as we often find them in late medieval paintings, but as quite happy models for perfect human beings, although the leaves of the fig are here present as well.
I still remember how Muslim students were shocked to see the naked statues adorning the graves in Westminster Abbey in London.. In this rather small church this very big painting is rather attracting attention as well. There were many visitors in the church-museum (also with a modest entrance fee!). 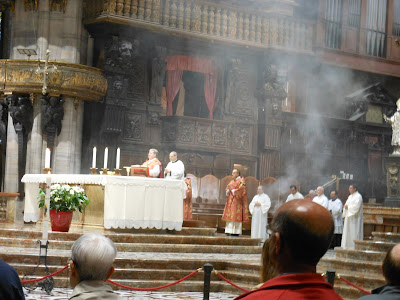 In Milan we were on the Sunday of Pentecost and quite many people attended Mass. The choir needed loudspeakers to reach the congregation, because of the huge size of the cathedral. The organ was very powerful and easily could fill all coins of the giant building. This is a church for big manifestations: many altar boys or men, several priests, the incense mixing with the beams of the sun. A wonderful event, when for just a few hours the church was not a museum but tried to function as a place for prayer and meditation.
We made a long walk to see remnants of the Roman period (Ambrosius, Augustine) that Sunday and were in the much smaller Santo Lorenzo, where a vivid parish attended Mass and small children were receiving their first communion. Here we had the feeling of the true building for religious ceremonies and not for museum guests. 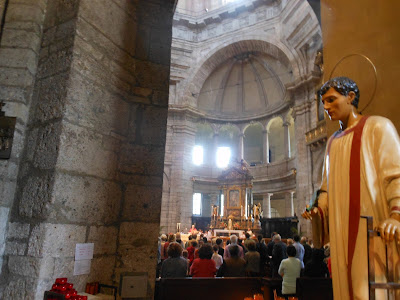