Since the 1970s quite a few Muslims have arrived in our country, The Netherlands, most of them from Morocco and Turkey. The lesser known Turkish Muslims are from the Hizmet (=dedication, voluntary work) movement. They follow the doctrines, admonitions and example of Fethullah Gülen (b 1938 or 1941, now living in a Muslim 'monastery' in Pennsylvania).
Gülen preaches in the tradition of Said Nursi who sought a harmony between modern science and Islamic mystical philosophy. Gülen is much more practical than Said Nursi (died 1960, never met Gülen). He was born in the traditional and conservative Eastern Anatolia, but since early twenties lived in the West, mostly in Izmir. Here he saw that many people arriving from the poor eastern provinces could not find their way in this modern society. Similar experiences were in Europe. During a visit to Germany in 1978 Gülen discovered that Turkish migrant workers did not learn German, did not adjust to modern European society, because theu thought that in a few years they would return to Anatolia. He suggested them to seek better schooling for themselves and their cildren and to try to establish them as good new citizens in Europe. 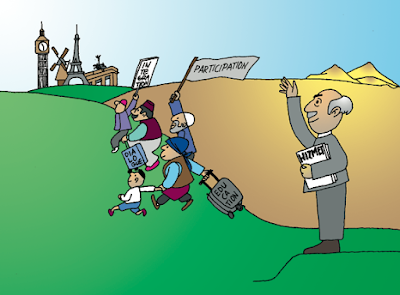 In 2010 a conference in Amsterdam addressed the issue of Gülen in Europe. This has turned into a book to be published later this year under the title of Gülen-Inspired Hizmet in Europe. The Western Journey of the Turlkish Muslim Movement. The first section of the book has chapters on the mystical and activist doctrines of Gülen. The second section has presentations on Belgium, France, Netherlands, United Kingdom, Germany and Albania.
For the first section I wrote a bibliographical essay. It turned out that Indonesians are not so eager to follow the Turkish teachers of Gülen. They did not learn Indonesian, their English was quite poor and they were not really liberal and open Muslims. Earlier this year I wrote about them from the information we received from a son of Syafaatun alMirzanah. Anyway, I enjoyed the whole project and suggest that you buy the book which will be publieshed at Peter Lang in August this year.
We (=I) asked our artist Frans Kalb to make a cartoon about Gülen and the Turkish people who came to Europe and want to be integrated in European society, thanks to better education and dialogue with 'white' Europeans. Unfortunately, our publisher Peter Lang did not allow us to put a picture on the cover of the book, because the series in general has no such drawings. Therefore I present it here as an idea of the general values and concerns of Hizmet or the people of the Gülen Movement.
Gepost door Karel Steenbrink op 11:14