Public Religion or Religion in the Public Space

During our two weeks of holiday in Italy and Germany we saw many more public manifestations of religion than can be seen in modern Netherlands. 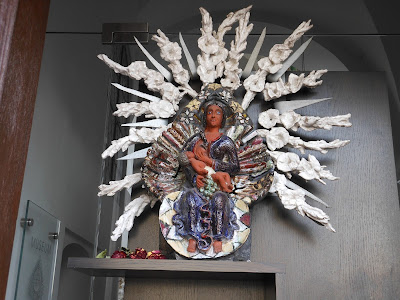 The first is the front of the Jesuit Church in majority Protestant/Lutheran Heidelberg. This image of feeding Mary with child is more or less an invitation to enter. Or it is the basic statue to be used at any time, outside the 'office hours' of the official church. 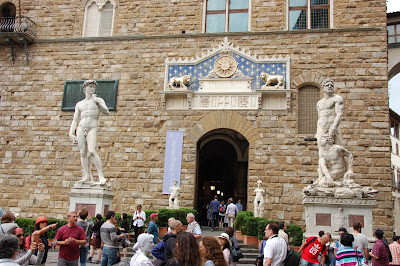 This is the entrance to the old town hall of Florence. There is quite a 'syncretic' collection of religious images here, as renaissance was a mixture of Jewish, Christian and Greek/Roman religious traditions. On the left is David, ready to throw a stone to Goliath. On the right is Hercules, the Greek divine figure who carries out the heavy jobs and as such is an example for the ruling class. In the centre is the radiant sun, symbol of Christ with the letters IHS: In hoc signo vinces, in this sign you will gain the victory. Next to this great entrance was a statue of Theseus killing the monster of the Creta, the Minotaurus. Initially we thought that this was the statue of David with the head of Goliath. These nythological stories are all very close. 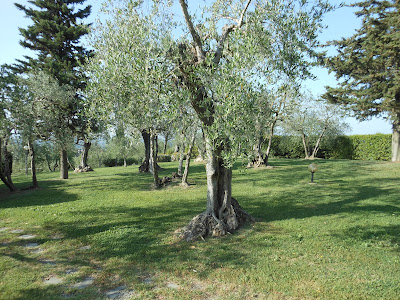 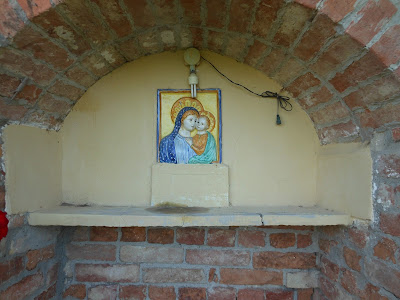 We stayed in an 'Agriturismo' a classical farm close to an old castle. It is now turned into a tourist place. It had a romantic name: Monte Olivo, because half of its 43 hectare was with grapes, the other half with olive trees. Our apartment was closest to the small outdoor chapel with a ceramic image of Mary and Jesus. Therefore our apartment was called Madonnina and we had a nice small statue of Mary and Jesus in our bedroom. 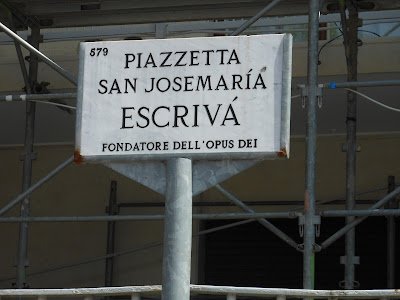 In Milan we saw the sign for a short square, that was not on our map. Apparently the founder of the Catholic Movement Opus Dei has received also public recognition here, very close to the great church/basilica of Saint Ambrosius and the Catholic University of Milan. 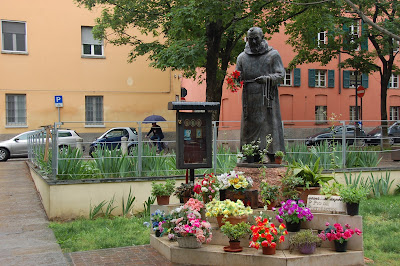 On our way from Tuscany to Milan we made a short stop in Parma. Here again a very big Roman church with a magnificant baptisterium. In a square near the major churches we came across a statue for the modern but very popuar saint of Italy, Father Pio, who had faked his stigmata, is not known for deep spiritual doctrines or statements, but very loved by many. Here again in the public space.
Gepost door Karel Steenbrink op 03:31