Next week, 12 March I will join in Bern a meeting of a research group on the role of churches in activities for sustainable development in Indonesia. Therefore I am now putting together some findings from the draft of my third volume: Catholics in Independent Indonesia, 1945-2010. I am also reading some new material. One of these is the doctoral dissertation defended at UIN, the Islamic State University of Yogyakarta by Bertholomeus Bolong, Misi keagamaan dalam pembebasan Kaum Miskin pada Islam Muhammadiyah Kabupaten Gunung Kidul dan Gereja Katolik Keuskupan Agung Ende.
The defence at UIN was on 1 July 2009 with Amin Abdullah as rector and good old colleague Burhanuddin Daya as first promotor. 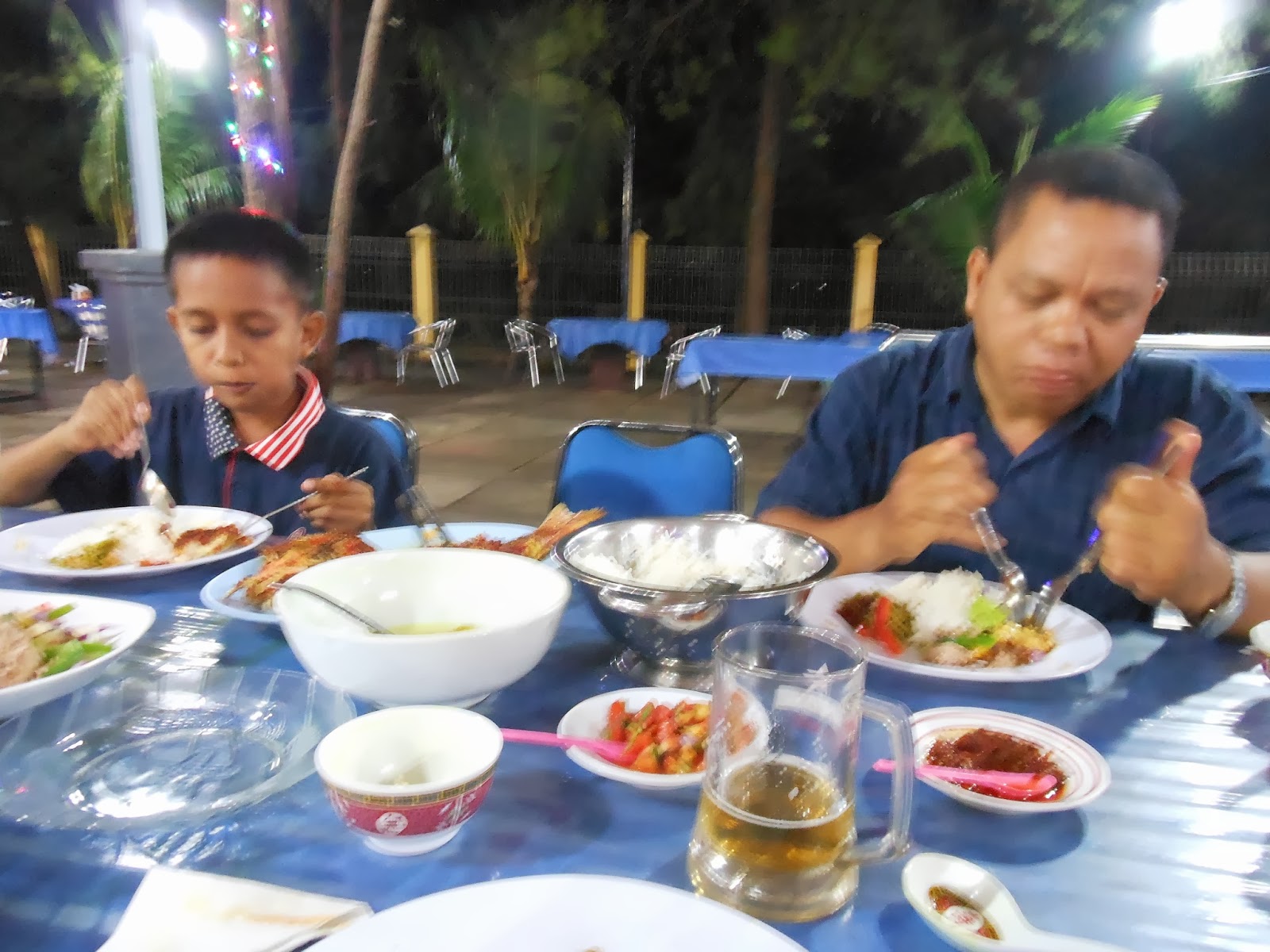 Romo Bertho as he is usually called is from Ngada, close to the village where Philipus Tule was born, south coast of Flores, some 40 km West of Ende. A region where the coast is for Muslims, but a few kilometer from the coast (and uphill) the region is dominated by Catholics. They live in good harmony.
Bertho did not join the SVD order, but came to the Carmelites, studied in Yogyakarta and is now working as vice-provincial of his order in Indonesia and also in cooperation with Fredrik Doeka of the Protestant Faculty. I wrote already about the two in my report of the ASAKKIA meeting of December 2013.
Now I am reading the dissertation, where Bertho describes his research on Muhammadiyah activities in Gunung Kidul, south of Yogyakarta and in three districts of Central Flores.
His main chapter is the fourth, where he describes many small activities. In the earlier chapter he describes  from Muslim and Catholic doctrine how religion is not (only) concentrated on the hereafter and the doctrine of God, but has a concern for well being in this world, especially a good eye for the poor. In Muslim writings and preaching this is more concentrated on the giver: ZIS was a new abbreviation for me, for Zakat, Infaq, Sadaqah. It shows the liberality, the philanthropy that must be shown for the poor. On the Catholic side the emphasis is rather on the situation of the poor that must be improved at any way. In the sections on Islam the sources are mostly from Qur'an and hadith, but for Catholics it is the triad of rerum novarum, Quadragesimo Anno, Mater et Magistra, (resp. 1890, 1930, 1961) and the more recent formulations af Vatican II. 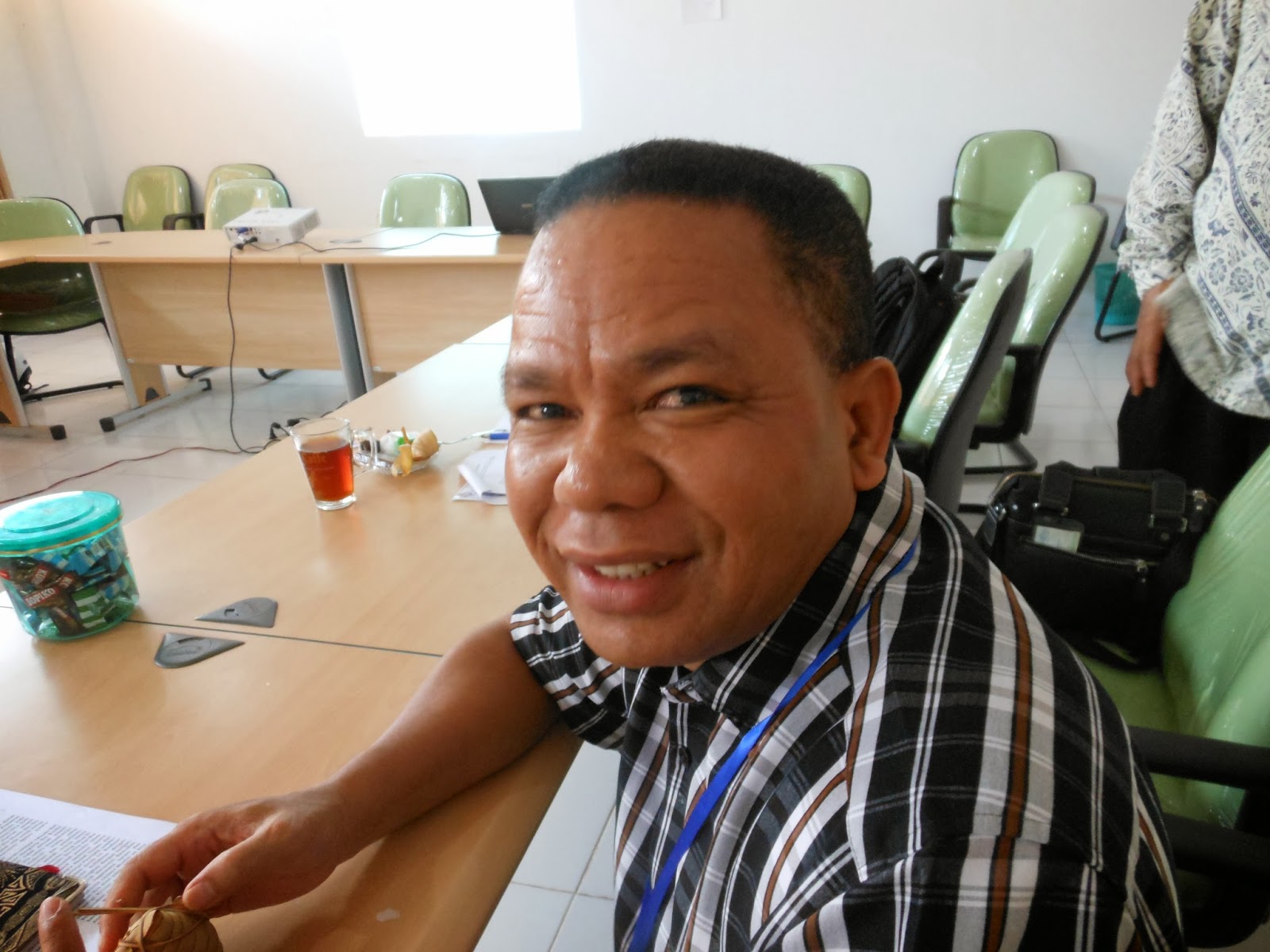 Both pictures here show Bertho at the meeting of ASAKKIA. The first evening dinner at the beach together with the youngest son of Fredrik Doeka and here above at the conference room.

In his chapter IV Bertho is keen on definitions of poverty, statistics, the percentage people of their income have to spend on food (about 70% or even more). The causes of poverty are in both region: no jobs, feudal structure of society, poor soil, no industry in the region. One special cause for Flores is: gemar berpesta a culture of ceremonies and celebrations at wedding, birth, death that cost much money and bring people to debts. There are more problems than successes: church, government administration are often corrupt. Time is often not used (between July-December farmers cannot do much for their soil). The quality of coconut oil shold be improved to have access to a better market, forest fire destroy the grounds.
Another difference between Catholics and Muslims is, that charity for Muslims is often related to preaching, pengajian rutin. Dakwah is a common word in Muslim discourse about the subject and it includes also many religious activities, while the Catholics make a sharper disctintion between the profane and the religious. Khitan masal, or group circumcision is also considered as a kind of charity. Both religions have an open eye for the growing problem of HIV/AIDS. In Flores this is more urgent because of the many women but also men who work abroad for many years (Middle East, Malaysia) and this causes unstable relations.
The Catholics also give more training and courses for agriculture, but the results are often not so clear.
In general both religions promise a splendid future in heaven for the true believers. We cannot yet control the real value of these promises for thew long term. For the short term the religion hopes to contribute to freedom from poverty, but they are until now unable to realize this hope. This is a quite realistic piece of work, although the language of the preist and preacher sometimes also helped to formulate some conclusions as dreams rather than strict reality.
Gepost door Karel Steenbrink op 08:27