In another blog  have written some impressions about his biography. Here in translation p. 234-5.

Open letter to the leadership of the Majelis Ulama Indonesia, MUI, Counsil of Muslim Clercs of Indonesia

by: Djohan Effendi, General chairman of the Indonesian Conference for Religion and Peace

Please, allow me to address to you this open letter, in relation to the cruelties that were directed towards some Human Beings, creatures of God in our country, members of the Ahmadiyah Community of Indonesia. These acts of cruelty are, directly or indirectly, related to the fatwa of the MUI that defined their convictions as a deviating belief. I write this letter not in order to defend the opinions and belief of the Ahmadiyah Community in Indonesia, but to call for a defence of the freedom of conscience that by God is given to Human  Beings as his Caliphs or Caretakers on the earth. 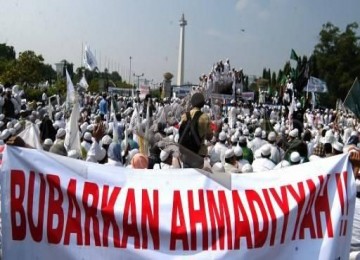 I will not discuss or question the content of the said fatwa because the issue of deviation is a common fact in the life of religions anywhere and at all times. I understand fully that the said fatwa is based upon the feeling of responsibility of the Leadership of the MUI to warn the Muslim under their pastoral care in order to prevent that they they turn to the 'wrong road' by doctrines that they consider as deviating from the true doctrine.
Throug this letter I want to submit several questions related to the implications of this fatwa that has caused the rise of violent riots and the destruction of the goods of those who were considered as deviating.
Are those who are the object of this fatwa as deviating no longer allowed to live on this earth of the Lord? Were they not born according to the wish of our Lord? Further, does the Country or the administration have the authority to chase them away from the surface of this earth? Isn't it not true the Lord was never teaching us, that this earth only can be used by those who never were deviating from his commands?
Are they no longer allowed to recite the confession of faith, shahada, to perform the prayers and fast, pay the zakat, and other religious duties like the other Muslims perform, because they are no longer seen as Muslims? Must their houses of prayer be closed, their mosques closed, where they perform the common Friday prayers and have other prayers together, where they say the salat tahajjud?

Is it to them forbidden to recite the Qur'an and study the books of hadith, as they did until now?
If they follow the wrong doctrine, should we not consider it as their own responsibility? Is the responsibility of the ulama not restricted to the communication of this judgment and should they rather restrain from any violence or constraint?
I do truly hope that through this letter the leadership of MUI will not allow anybody to abuse this fatwa as an excuse for the use of violence towards members of the Jemaat Ahmadiyah Indonesia or consider them as no longer truly Human Beings who are loved by God. It this moment they are in the grip of fear, their lives and property are under attack. They are forced to pray in hidden places. It is even so that also the Government officials no longer consider them as people who have the constitutional right as citizens, because about them a fatwa has been issued that they adhere to a false doctrine.
I am convinced that we all still are able to hear the voice of our conscience.
Jakarta 30 July 2005.
Gepost door Karel Steenbrink op 08:37