In the period 4-13 December 2013 I paid a visit to Jakarta and Kupang. The main purpose was the festive inauguration of ASAKKIA, Asosiasi Sarjana Kristiani untuk Kajian Islam Indonesia. The initiative was taken by Dr. Fredrik Doeka who works in close cooperation with Dr. Bertolomeus Bolong, a Carmelite priest, about whom more in another blog.
For me it was the first time in four years to return to Jakarta. It was also the first time I traveled with Emirates, in a wide body plane, with space for some 800 passengers. The airport of Dubai is big, rather crowded, apparently good business. Arab men in white robes, women in black: but they are a minority and most people are international travellers between Europe and Asia. 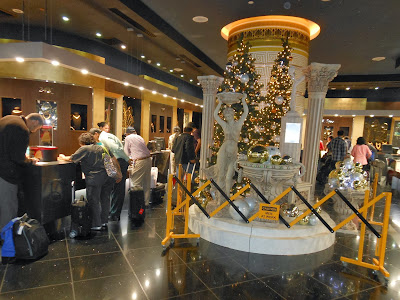 It was the first Christmas tree of the season for me. There were shops where an outfit for belly dansers could be bought. But most of all it were cigarettes and liquor shops.
I had time to go through the autobiographies of the rulers of Abu Dhabi and Dubai. Not really Islamic besides some conventional phrases in the beginning. It was about their 'vision' to make an international cosmopolitan region of their small territories. They blamed weak Arabic leadership for the great crisis in the Arab world. But it is all economy and well-thought hospitality, rather than a cultural let alone a religious vision about their success.

Arrival in Jakarta: it took two hours to get at Jalan Teuku Umar, Guesthouse PGI. Jan Aritonang is now living quite far from the centre, but he had a meeting in the neighbourhood for the national accreditation commission and took me out for dinner. He is active, now with a plan to write a thorough book about his own Batak Church, a secession of the 1960s. The fragmentation of the Protestant Churches is a great personal concern for him. 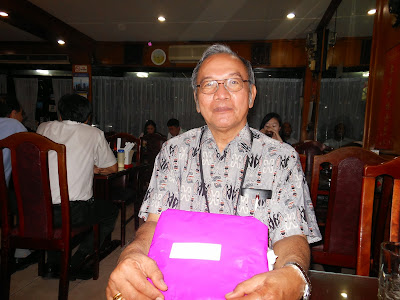 There are many new associations for Chrfistian theologians. In Church history the new centre is quite successful.
For Kupang and also for the Islamic University of Jakarta I had prepared an autobiographical essay. It started with the study of Arabic and Islam under Prof. Jean Houben who had a grand vision about the unity of the Muslim philosophers and Thomas Aquinas.  If all Muslims should follow the doctrines of Averroes and all Christian Aquinas there could be good harmony between the two largest religions of the world. Nice theory, but it does not work!
Next was my experience of working, field work in a pesantren (1970-1971). Literary study is not enough, we all need personal experiences. Ibn Rushd was honoured in Gontor, not as a philosopher, but as a liberal scholar of comparative Shari'a law, through his book Bidayatul Mujtahid. I went so far in Gontor to ask for permission to join the regular prayers, because I wanted to experience not only the classes, but also the obligatory common prayer. I could memorize the most important prayers, could convince them that I belived in One God and respected Muhammad as Prophet and was given the permit.
Third phase was the confrontation between Western and Indonesian studies of Islam during my period of work in 1981-1988 at the Jakarta and Yogyakarta Academy of Islamic Studies. Why do Western scholars pay so much attention to variety in Islam, to heretics, also to popular religion? 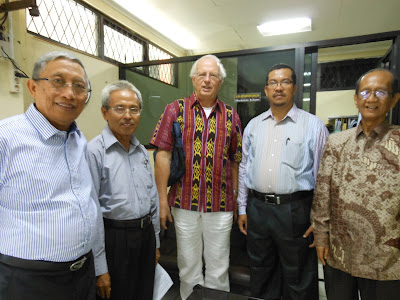 From left to right here are the closest colleagues and friends from the period 1981-3 in Jakarta: Prof. Dr. Husni Rahiem (organization of Islam), Prof. Dr. Salman Harun (tafsir), my humble person and the director of the graduate school (name forgotten) and finally the mystical philosopher Prof. Dr. Aziz Dahlan. They are now all three 68 years old and expect to reach the stage of emeritus in 2015.

The roads of Jakarta ared very crowded, more than ever. So there was time to enjoy modern architecture and this was for me the most remarkable somewhere in South Jakarta, woth the Arab script for Allah on top of a very big building. Also a sign that religion has played since the early 1990s an ever increasing role in Indonesian society? 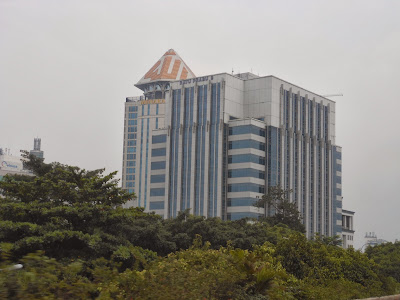