ASAKKIA B: Members from Sulawesi, students of Olaf Schumann

At the constitutive first meeting of ASAKKIA, the Association of Christian Islamogists of Indonesia in Kupang, 9-10 December 2013, there was a surprising number of five members from Sulawesi. In the previous series on Catholics we discussed already Damianus Pongoh. The others were nearly all students of Olaf ASchumann, b. 1938 and still active. Schumann is now teaching in Sabah, the Malaysian part of the island of Borneo, but prepares a home in Bali, in cool Bedugul. He is still supporting students who want to take a PhD in Islam. 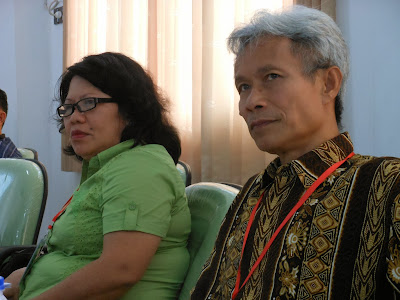 Left on ther picture above is Ruth Wangkay, who is in charge of the finances of ASAKKIA. She will look for more funds, but basically it is a self-supporting organization and members pay Rp. 50.000 per month. There was a 2 million donation from UKAW and some more starting capital. I last somewhere my traditional notebook, my diary where I had the notes about the conference. So, I do not know how far she is in her dissertation  and what topic will be discussed. She is lecturer at the STT in Tomohon and told us sad stories about the schism in the institution, which caused that there are at this moment two rival theological schools in Tomohon. The oldest one is not recognised by the synod and its costs students much money (10-25 million) to obtain a legalisation of the study at Old-Tomohon in order to become a minister at the GMIM, the kargest Protestant Church of Minahasa. Besides, there are two many people with a finished theological schooling. So, they have to wait some four years before they may start a vicariate as a first step towards serving as a Protestant minister. The job is now less attractive for men and about 1200 out of the 1800 ministers of this church are women. The same is the case with the ministers of the Protestant Church in Timor, GMIT.
For her PhD she works on the theme of Muslim Women in the Civil Society of Indonesia. She selected three women.

Above, right, is Indu Y. Panggalo, who lives in Rante Pao, at the office of the Toraja Church. He studied Arabic in Tunesia in the 1980s, was also for some time in Hamburg with Olaf Schumann and for a period also in Leiden. His dissertation work was with the SEAGSTH: Southeast Graduate School of Theology.  He wrote a dissertation under Olaf Schumann with the theme of dhimmi. He concentrated on sources about the Ottoman Empire. 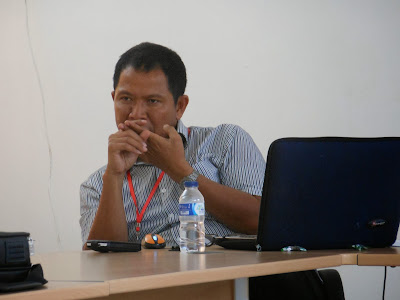 Dr. Sulaiman Manguling is one of those who were supported in their study by Olaf Schumann, but his final study was (like with Bertolomeus Bolong) at the Islamic University of Yogyakarta, where he defended his doctoral dissertation on 26 April 2012 with the subject of Islam in the culture of Luwu. He teaches at the theological school of Makassar. He is also a Toraja Christian. The interest of Toraja Christians in Islam may have some connections with the fact that the common ground of traditional local religion is quite strong and that most families have Protestant, but also some Catholic and some Muslim members. 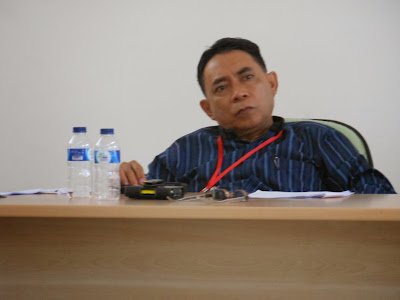 Alius Rampalodji is teaching at the STT in Makassar. He was ten years ago under Olaf Schumann busy with a dissertation, but then he was elected president of the Synod of the Poso Church and then the riots started between Christians and Muslims. So, he left the project. Now, in a more quiet period, he resumes his studies of Islam, but we are not sure whether it will ever result in a full dissertation.
Gepost door Karel Steenbrink op 02:34